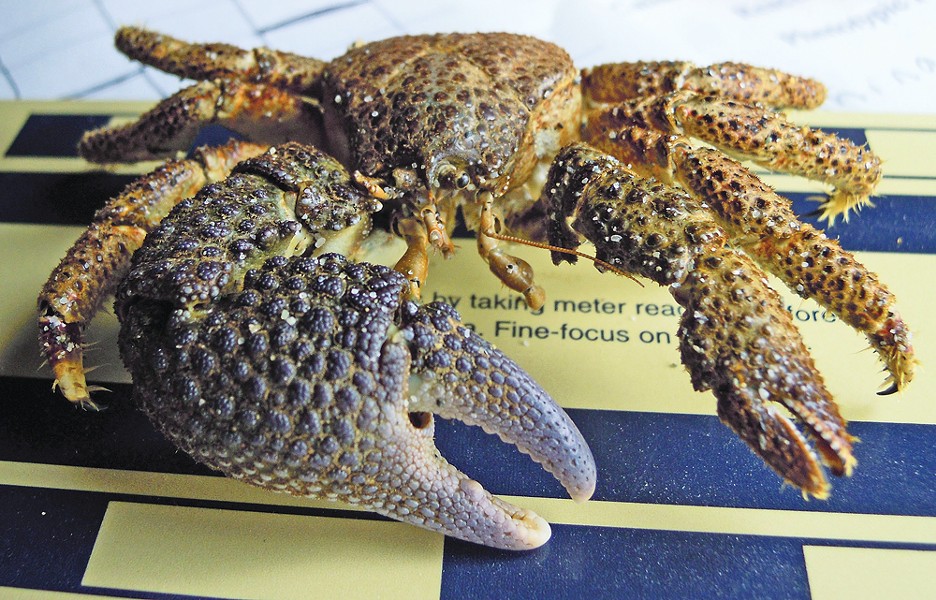 The large sign over the archway said: "Welcome to Pillowburg Resort and Spa!" The small sign next to it said: "No Crabs Allowed." The guard, a flabby sea slug, noticed me and said, "Oi! We don't allow your kind. Beat it."

The guard said, "You are a granular claw crab (Oedignathus inermis). You are hard and bumpy. You are the opposite of a pillow. The family name of your kind of crab is Lithodidae, which literally means 'resembling a rock.' Besides, we just sold out."

I said, "But I can see lots of empty pillows right through there. Come on, dude. That pillow lifestyle looks sweet. My people live in rocky crevices among hard-shelled mussels or tucked between predatory anemones. We live in places so tight you'd think we were trapped. My own home is a large, empty barnacle shell under some coralline algae. We usually live near shore from Alaska to Northern California and over by Japan where the water is cold and the surf pounds. It's a rough existence, and we wouldn't have it any other way. But a little Pillowburg vacation sounds relaxing."

"Shove off, you filthy crab," said the guard. "That small left claw of yours is bad enough but your big right claw looks deadly."

I said, "I use my rather impressive and bumpy right cheliped, which is what you call a claw, mainly for blocking the entrance to my lair so predators like seagulls can't pull me out. We granular claw crabs feed on plankton, which we filter from the water using our feathered mouthparts. So, we aren't going to chomp anyone and we present no more risk than anyone else in Pillowburg. In fact, our species name inermis means 'unarmed.'"

"But you're a crab. You know how you people are — shifty and brutish."

"No, we aren't. We are sophisticated romantics. My people live in pairs and engage in precopulatory courtship rituals that involve both touching and producing lovely — to us — scents. Then we release our larvae in January and February. We are lovers, not fighters. And my wife and I would like to, you know, do it in Pillowburg."

"Whatever," said the guard, "Frankly, that outrageous claw just makes it look like you are compensating for something."

"Well, I am compensating. I need this cheliped because I have a soft underbelly. I am a small but proud king crab. Some of us don't have an armored abdomen like most kinds of crabs. So, once a seagull gets past my right cheliped, I'm a succulent and nutritious bite. Gulls, like owls, hock up pellets of material they can't digest. So, our detached chelipeds, which are common on beaches where flocks of gulls rest, are probably all you Pillowburgers know of us."

"Here, look. My abdomen is like a soft, fleshy, puffed-up disk. No hard shell, no spines, just a squishy cushion full of intestines, reproductive organs and other soft abdominal bits. Some people even call us 'the soft-bellied crab.'"

"Whoa ... Let me call my pillow guy. Hold on. Boss? Yeah, I got a granular claw crab here who — get this: He has a very soft, shall we say 'appealing' belly." The guard turned to me, "OK, crab, the boss says you can come in but you have to let him touch your belly. And you can't bring your wife."

I said, "You know what? Kiss my pillowy ass. I'll vacation in a cool place, like Humboldt County."