Assassination Nation and We the Animals 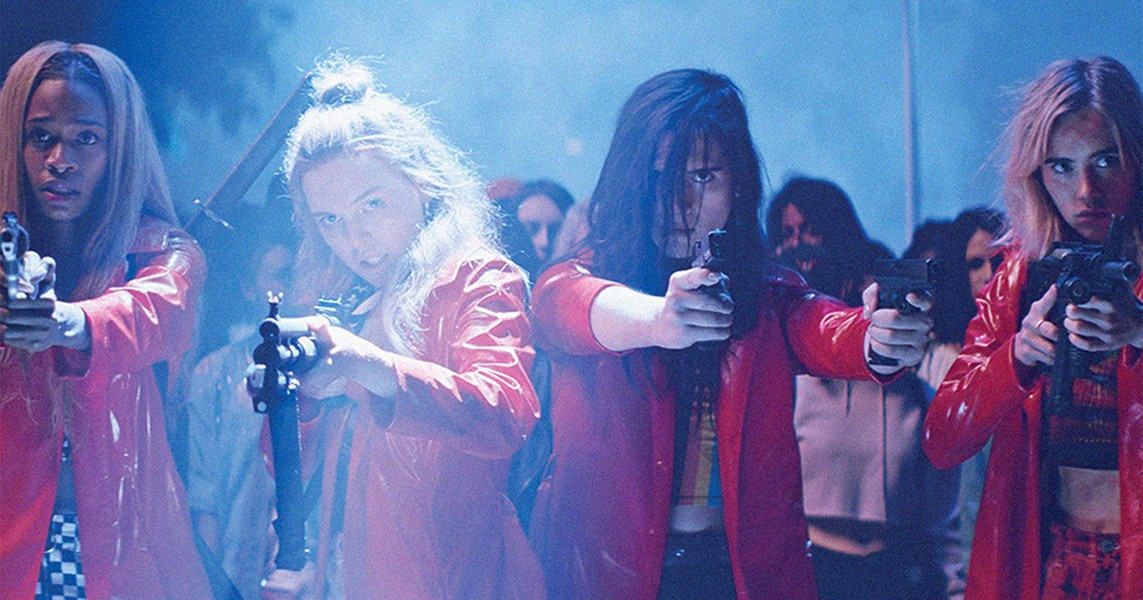 Assassination Nation Since we're not counting the shit we did at 17.

ASSASSINATION NATION. This far into our waking national nightmare, when hours seem like days and each sunrise reveals more desperate attempts to hamper or undo the personal, social and legal freedoms we'd have define us, it can be difficult to identify new developments to be thankful for. There is hope at the national level, I suppose, with coming midterm elections, active investigations and the occasional, delightful indictment/conviction. But government, by now a de facto branch of the industrial conglomerate that owns it, is too fickle and vicious to provide much real solace. I find some in the emergence of pointed, provocative voices in art and in the coming together of people on the ground level. Attempts are being made to listen to each other in some sectors and (some) people with access to the larger stage are trying to say something of substance. We haven't yet arrived at a renaissance of satire but we might be getting there.

Written and directed by Sam Levinson, son of Barry and a relative newcomer, Assassination Nation can be a victim of its own topicality and cleverness, but only because its ambition occasionally exceeds its execution. It attempts to take on so much of our current cultural conversation/screaming match while maintaining a balance between heightened reality and verisimilitude, that few, if any, veteran directors could pull it off completely. And they probably wouldn't have the energy and righteous indignation to pour into the material anyway. This movie isn't perfect but it has much to say, and says so much of it artfully and well enough to be forgiven for most of its flaws.

In a suburban American town called Salem (on the nose but see above), a series of hacks lead to high-profile, high-volume personal data leaks and in the public reaction madness lies. The mayor is the first to fall, first to public outcry, then to shocking violence. The high school principal, defiant against the onslaught, is next. By the time the town turns in on itself and against our four protagonists Lily (Odessa Young), Bex (Hari Nef), Sarah (Suki Waterhouse) and Em (Abra), blood runs in the streets. Mob rule is instituted and masked men roam the streets in slavering packs, anxious for violence.

Levinson's restraint as a storyteller is crucial. Leading up to the third act, when it finally yields, he builds a delicate, impactful narrative with a lurid, lyrical style that telescopes from confessional to voyeuristic. It incorporates and examines the vast existential battlefield of 21st century adolescence, toxic masculinity, heightened sexuality, loss of privacy, a culture's unrelenting self-judgment and assignation of labels — man's inhumanity to (wo)man as filtered through everybody's iPhone camera, in other words. It's a grand and high-minded enterprise disguised as pulpy teen entertainment and mostly executed with care and originality. Stylistically, its occasionally unnerving editing and the near-brilliance of its elaborate camera moves attempts and achieves more than most. It's occasionally a victim of its own ambition and the climax is likely a bit much for some. But we are better for its noble failures.

WE THE ANIMALS. At first blush, I feared this would be of certain school of pseudo-intellectual, quasi-artistic examinations of a disenfranchised group. You know the type: defined by a (usually false) sense of intimacy; characterized by overweening efforts to humanize people who, through the efforts of the artist, become even further distanced from us, the audience; acted by children or unknown actors; shot in a frenetic, occasionally beautiful combination of lyrical framing and uncomfortable close-ups aimed at manufacturing a heightened, lived-in esthetic. Well, We the Animals is one of those but, to its credit, transcends that myopic classification (mostly) with emotional authenticity and some distinct artistic flourishes. But in its insistence on being "unassuming" and "real" it sacrifices some of its charm to deceptive artifice.

In the alternate swelter and freeze of the American Northeast (upstate New York? Pennsylvania? Somewhere close to the seat of California kids' nightmares, anyway) brothers Manny (Isaiah Kristian), Joel (Josiah Gabriel) and Jonah (Evan Rosado), our narrator, wrestle with the difficult love of their parents (Sheila Vand and Raúl Castillo) and the looming spectre of adolescence. As much as Jonah loves his brothers, he knows he's different, putting his thoughts down in a hidden artist's journal in the dead of night. (Passages from the journal are animated throughout in a pretty but sometimes disjointed departure from the movie's '80s fuzz-tone look).

Based on the novel by Justin Torres with a screenplay by Daniel Kitrosser and Jeremiah Zagar, and directed by Zagar, this story clearly comes from an honest emotional place and, in fairness, it tells a unique and unadorned story about living in that place. Maybe it's my jaundiced eye that makes it look like everyone is trying a little too hard to have us feel it. R. 110M. BROADWAY.

SMALLFOOT. Channing Tatum and James Corden voice an animated feature about a yeti out to prove the existance of a human. PG. 96M. BROADWAY, FORTUNA, MILL CREEK.

CHRISTOPHER ROBIN. Pooh gets real with Ewan McGregor as the boy from the books. PG. 104M. BROADWAY.

FARENHEIT 11/9. Michael Moore's documentary about how we came to the Trump era and whether there's a way out. R. 125M. MINOR.

THE HOUSE WITH A CLOCK IN ITS WALLS. An orphaned boy (Owen Vaccaro) helps his warlock uncle (Jack Black) track down an apocalyptic timepiece. With Cate Blanchett. PG. 104M. BROADWAY, FORTUNA, MILL CREEK.

LIFE ITSELF. Oscar Isaac and Olivia Wilde play a couple whose life together affects others across the globe and over generations. R. 118M. BROADWAY, MILL CREEK.

MANDY. A murderous cult in the woods, a loose tiger and a chainsaw fight — is Nicholas Cage OK? NR. 121M. MINOR.

THE MEG. Jason Statham lands a big one with this brisk giant shark movie with better effects and performances than expected. You're gonna need a bigger popcorn. PG13. 113M. FORTUNA.

PEPPERMINT. With a boilerplate revenge plot, stereotypical Latinx villains and a hastily drawn heroine, this is not the female-led action drama anybody needs. R. 102m. BROADWAY.

THE PREDATOR. Director Shane Black's sequel is also its own movie, with solid pacing and a sense of fun that mostly works, despite veering silly now and then. With Sterling K. Brown and Olivia Munn. R. 107M. BROADWAY, FORTUNA, MILL CREEK.

A SIMPLE FAVOR. A twisty, stylish date-night noir worth the price of admission for the clothes and to watch Blake Lively and Anna Kendrick interact as vanished femme fatale and homemaking blogger sucked into a mystery. R. 117m. BROADWAY, MILL CREEK.

WHITE BOY RICK. Matthew McConaughey and Richie Merritt star in a true story about a teenager drug dealer who became an informant for the FBI. R. 102m. BROADWAY, MILL CREEK.