No Peeking Behind the Nuke's Fence 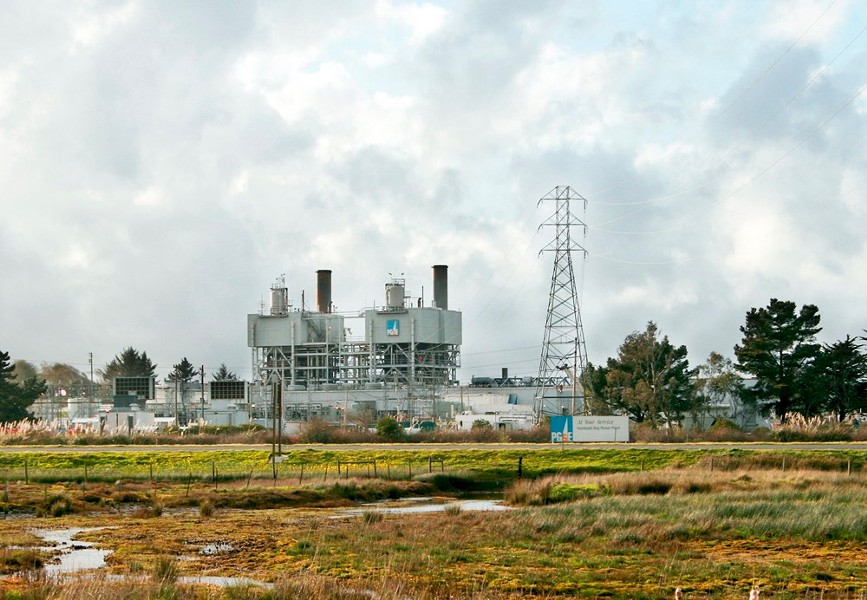 After a modest burst of self-congratulation upon finishing the physical decommissioning of its Humboldt Bay nuclear plant in November of 2021, PG&E has gone deeply silent in answering the Journal's follow up inquiries into the long-term safety of the highly toxic radioactive waste now ensconced 44 feet above Humboldt Bay at Buhne Point.

The lack of response raises concerns about hiding pitfalls in the future safety of the radioactive waste stored on the edge of the bay.

While the utility can't seem to get the power returned to many after the holidays' snowstorms, stop sparking forest fires or avoid being fined by the state for ducking power safety inspections, it might claim a victory lap for burying its nuclear power plant that was shut down back in 1976. It could show us what's behind its fence at its shiny, new nuclear waste site at King Salmon.

PG&E's plant won't go all Chernobyl on us but the radioactive remains are here. While they're packed up ready for a ride to someplace safer, that safer place doesn't exist, and the toxic remains are probably here forever. The way it is now, the federal government says the utility only has to keep a light watch on the waste, that they've done all they're going to do about making it safe for the next generation.

But there is much more to do because the waste site has to keep from leaking highly toxic radioactivity into our environment. We're trying to find out — in detail — what the utility has actually done and what, if anything, it's continuing to do to help ensure public safety.

Alas, the utility has not responded to repeated attempts, beginning in October of 2021, for a peek at its guarded radioactive waste site. Nor has it responded to requests for comment on future safety, palliative care and mitigating environmental threats to the high-level nuclear waste ensconced at its power plant.

The week before the Journal published "Dancing on the Hum Nuke's Grave is Strictly Prohibited" (Nov. 4, 2021), which highlighted a few of the utility's accidents and its fiscal irresponsibility in its history with the Humboldt nuke, I had already asked the company to allow me behind its heavily secured gates at the power plant to see the new long-term waste storage site. PG&E spokesperson Carina Corral wrote in an email that the utility was "currently coordinating schedules of our subject matter experts to travel to Humboldt to be your tour guides." After the Journal article, PG&E fell silent on any follow-up until Nov. 16, 2021, when Corral noted tersely, "We are not offering tours of the facility." When asked for an explanation of the turnabout, there was no response.

As a regulated utility, it is illegal for PG&E to discriminate against publications and/or journalists. "PG&E wields considerable power over the press covering its activities," wrote Ninth District Court of Appeal Justice William Newsom in the court's unanimous 1993 decision. "In the case of a public utility enjoying such extensive monopolistic authority .... there is an important public interest in assuring freedom of the press in reporting on matters lying within the exercise of its franchise." (Full disclosure: I was the plaintiff in the case.)

Although the lack of access and answers from the utility continues, key reports on the site's stability from the California Coastal Commission surfaced last week.

When the Coastal Commission permitted PG&E's nuclear waste storage in 2011, it required the utility to report on the vulnerability of the bluff holding up the waste storage casks, as the Journal reported in "The Atomic Priesthood" (Dec. 16, 2021). Although the federal government prevents states from addressing health and safety concerns over nuclear power, the commission maintains a limited role in protecting Humboldt by watching the waste site's stability — so the tons of highly toxic refuse don't slide into the water below.

Newly surfaced reports show the bluff under the waste retreated by 6 feet in 2012. Up until the last survey made available, covering 2017, rip rap armoring the bluff that holds the waste site has held firm, according to Eureka-based geologists SHN Consulting.

Tsunami warnings were issued on the North Coast on Jan. 15. A PG&E representative later confirmed via email that "there were no adverse effects at the Humboldt Bay Independent Spent Fuel Storage Installation." The week before, Jennifer Marlow, assistant professor in Humboldt State's Department of Environmental Science and Management, said in an email, "It appears that for now .... the slope is stable."

She wants the utility and the state to go beyond simply observing the current vulnerability of the radioactive waste site, and she is exploring community options through her project www.44feetabovesealevel.com.

"Under future conditions, if the rip rap wall is damaged by a storm/tsunami event, what is the stability of the slope under those future conditions?" she asked, opining that the federal government could revisit its safety assumptions, allowing for bluff failure and other events not considered in the original safety design. "If the waste will be here in perpetuity, then monitoring will need to be done in perpetuity so that we can map out pathways for how to adapt to any changes detected."

After reading last month's National Oceanic and Atmospheric Administration's Arctic "report card," I realized the Tip Top Club is destined to be a waterfront bar in the future, and I also realized that the Coastal Commission's requirement that PG&E keep monitoring the nuclear sites' stability is the only method the state currently has to safeguard the facility from a rapidly changing environment.

PG&E's got so many public relations snafus, the company doesn't have to add its shiny, new waste facility to the list by ducking responsibility for revealing what it is doing to keep the radiological nightmare from escaping its confines.