No Spit, No Problem

Shawarma in your kitchen 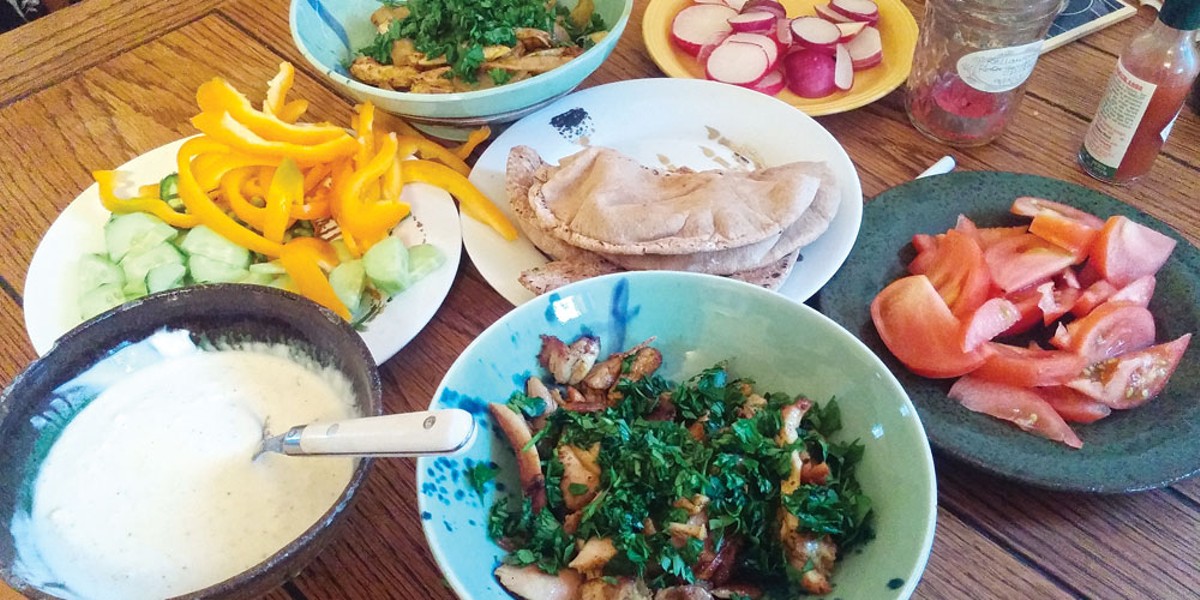 Just as here in the States we can go into any town, from a settlement to a city, and get a hamburger, so it is in Greece with shawarma. And not just in Greece; shawarma is available from chains, poky mom 'n' pop shops and jazzy lunch joints in most parts of Europe these days, since Middle Eastern cuisine has made its delectable way through almost every place where immigrants from Turkey, Israel, Lebanon, Syria and any number of interesting countries have migrated.

Shawarma, which means "turning" in Turkish, is a familiar sight to anyone who's traveled to Berlin or New York City or Tel Aviv. Called "gyros" in Greece, the word refers to that toddler-sized, grease-sputtering cone of mystery meat, deftly sliced mid-rotation and piled into a pita, slathered in sauce and lavishly sprinkled with additions ranging from red onions to french fries. The meat (usually beef, chicken or lamb) is not the finest cut by any means, so, as common sense and culinary history dictates, it's marinated and heavily seasoned. The flavor is a sort of flavorful meat bomb — juicy, hot fat, Middle Eastern spices and just a touch of heat. There are sauces: cooling white sauce (a mayonnaise/yogurt combination), tzatziki (a yogurt, cucumber and garlic sauce), hummus and/or tahini, or toum (an Egyptian garlic sauce). There are the add-ons: the sharp, wet crispness of vegetables of your choice (onions, tomatoes, lettuce, slaw, pickles, cucumbers) and the optional fries (pushes it over the line in my opinion but if you're 22 and drunk ...), and in some countries, pickled turnips, amba (a sort of mango chutney from Iraq) and various chili-based hot sauces.

I don't know why it hasn't caught on here outside of major cities — maybe the sight of a giant cone of meat that cooks for over a day is too bizarre? The reason the home cook doesn't shawarma is painfully evident, however — who among us has a giant vertical rotating spit? Although one can imagine multiple uses for such a glorious tool, it has yet to appear on the shelves of my local Target.

Imagine my delight when the New York Times recently ran a column on "home shawarma." A little extra research revealed quite a few recipes online but I was skeptical — can it really be shawarma without the meat cone? But there is a huge benefit: Rather than relying on the doubtful origin of said cone, I can go ahead and buy the high-quality chicken thighs I prefer, free of cruelty and all that other stuff we worry about in California.

Shawarma is not a dish to make for one. There is no way to make a little. It is great for a party, though, and lends itself to buffet-style serving and eating with your hands. It's also good for eating on the run — just wrap it in a paper towel and prepare for envious looks as you leave a trail of delicious meaty aroma in your wake.

I tried three recipes and have settled on the one from the New York Times, with my own minor adjustments. The meat can be marinated for as little as an hour but I recommend overnight — the whole point of this dish is extreme flavor. I swap in bone-in skin-on thighs for the Times' boneless skinless breasts (which I call wuss meat) throwing away the skin after grilling because I think bone-in thighs have the best flavor. It called for a pound of meat, which made enough for two big eaters, so the recipe below is doubled for four. White sauce, which you should have, is 2 parts yogurt to 1 part mayonnaise, 1-2 cloves mashed garlic and a hefty squeeze of lemon juice. Resist whole-grain and opt for big, fluffy big white flour pita. Shawarma is not a health food.

2 teaspoons ground cumin (freshly ground, if you have a mortar)

Combine everything but the onion, parsley and 1 tablespoon of olive oil into a marinade. Toss the chicken well and refrigerate for at least a few hours, 12 to 24 is even better.

Roast the chicken and onion chunks in a baking pan at 400F for 35 to 40 minutes. Remove and let it cool to warm. After removing the skin, separate the meat from the bones. Slice it into thin strips, no wider than ½ inch. When ready to serve heat the remaining 1 tablespoon of oil in a large pan over medium-high heat and re-fry chicken strips until they begin to curl a bit, turning darker and less moist. Scatter parsley over the top and serve, stuffed into preheated pitas with toppings of your choice — I like white sauce, tahini, raw onion, tomato and cucumber, as well as the toum recipe here.

This is basically aioli and I use an immersion blender in a big mason jar. A food processor works, too.

Blend the garlic, salt and lemon juice. On low speed, slowly pour in the safflower, sunflower or canola oil, then the olive oil. Taste and adjust the salt. The mixture should be a little thinner than mayonnaise. Enjoy with shawarma, sandwiches, fish, steamed veggies and potatoes.