Dutch American improv from Holshouser, Bennink and Moore plus Pretty Lights and other crazy music 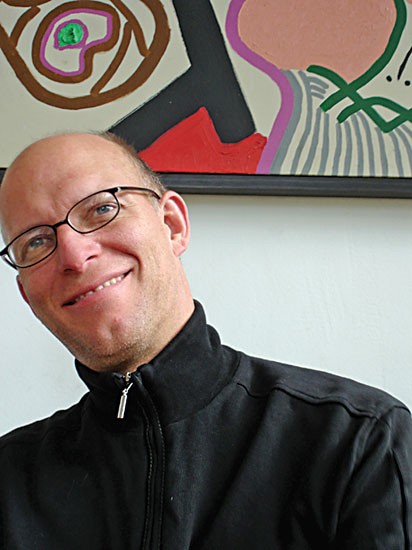 Holshouser, Bennink and Moore. For the uninitiated it probably sounds like the name of a law firm, but the trio of musicians -- accordionist Will Holshouser, drummer Han Bennink and reedsman Michael Moore -- is on the cutting edge of modern improvisational music.

Holshouser is a New Yorker, an innovative player who's worked as a sideman for everyone from jazzman Dave Douglas and vocalist Regina Carter to Antony and the Johnsons. Mad drummer Bennink is a Dutch jazz icon, one of the founders of the Instant Composers Pool and a longtime member of Clusone 3 (aka Clusone Trio), along with cellist Ernst Reijseger and Moore, a Humboldt expat who's been living in Amsterdam since 1982.

Moore grew up in a musical household: His father, Jerry Moore, taught jazz and world music at CR. After leaving Humboldt to pursue his music studies at the New England Conservatory and elsewhere, Michael followed his brother Gregg to Holland.

"We met some Dutch musicians who introduced us to other Dutch musicians -- that's how it goes. We [Moore and Bennink] started doing the Clusone Trio early on, but I wasn't quite ready for the textural aspect of it. I didn't have enough breadth of expression of something, so it took me a couple of years before I was comfortable with it."

As I told Moore, it's always seemed like Dutch jazz is a different animal, although I can't really explain why. "I'd like to hear you try," he replied with a laugh. "There's a different kind of timing. What I like about it is, there's no taboos. You can really play any kind of music you want. And you're playing a lot with context. Hopefully, it's not music about music -- it's just music. But music can too easily become a pastiche, making fun of genres, stuff like that. I don't think we cross that line so much; we're pretty reverent. On the other hand, if we get tired of playing a song, we'll stop playing it and go to something else."

What do Holshouser, Bennink and Moore have planned for their cross-country American tour? Moore will be playing clarinet, bass clarinet, alto saxophone "and maybe some melodica." He says, "It's kind of a lighter concept because Han is just playing snare drum, so it's just accordion and snare and myself, so there's not heavy bass or a big drum set or anything like that."

Bennink has a rep as a wild man on the drums. Will this be less wild? "I don't think he's any more restrained," said Moore. "it's just the sounds are lighter and it's scaled down more to the basics.

"Expect some crazy music and some sublime music; some beauty and some shit, or maybe beauty and tension is a better way of saying it. It's like life itself."

The trio's show on Tuesday, Oct. 20, in HSU's Fulkerson Recital Hall is the second show in the Redwood Jazz Alliance concert series. And as always there's a free workshop the following morning in Fulkerson Hall.

The Mateel gets way esoteric Friday, Oct. 16, with what they're billing as "Membership Appreciation Night." Music is provided by Chirgilchin, The Master Throat Singers Of Tuva, practitioners of a hard-to-explain vocal style that sometimes involves one voice singing in three octaves at once, with deep guttural sounds and something akin to whistling framing songs about life on the Himalayan steppes. They're joined by Lian Persian Music Ensemble, a quartet from Los Angeles that plays traditional Iranian music. Pre-show dinner and show admission are free if you are a member; non-members can buy a ticket for just the music, or join on the spot.

Ex-Arcata Ryan Jones, now a Portlander, is back in town Friday for a show at Jambalaya with the latest incarnation of Datura Blues, along with PDX friends Church and locals The Institute. "Datura Blues started in 1999 in Arcata," said Jones. "We've been through around 30 members since then, always keeping the same idea, which is not to limit ourselves to one style of music or one cast of characters. We basically look at each show as an individual experience. For the Jambalaya show we'll be more ambient and spacey -- a large part of the set will be improvised. And we'll have the guys from Church playing with us."

The Institute, formerly know as Zac Institute, is the band fronted by rocker/archaeologist Zac Hruby. "We changed the name to just The Institute because half of the new songs are written by Joaquin Dominick and Ryan McGonagle (of the Great Salvation) and we have a new bass player, Kevin White, from the Neptune Society," explains Zac.

Church is a cool alt. pop-psyche-prog combo with brothers Richard and Brandon Laws on guitar, drums synth and samplers, Christof Hendrickson on organ and Lane Barrington on percussion. Touring behind a new disc, Song Force Crystal, Church will also be here Thursday for a Lil' Red Lion rock marathon with Jettison Never, an alt. rock trio from Chattanooga, plus locals Nipplepotamus, Hey Eleanor and The Common Vice.

Friday at Humboldt Brews, it's Naomi and The Courteous Rudeboys, up from Santa Cruz with a mix of old school funk and reggae with vocalist Naomi Wilder fronting a four-piece combo. They're joined by Equaleyes, a like-minded trio from Boise.

As evidenced by recent shows by Z-Trip and others, the lines between the dance/rave scene, hip hop and the jam scene are blurring. Colorado-based DJ/producer Derek Vincent Smith (aka Pretty Lights) is a classic example, spinning out a mélange of organic dance music including samples drawn from hip hop and rock, touring with a drummer for his live shows. He'll be at Nocturnum Friday night with rock/hip hop comedy duo Josh Martinez and Sleep, aka The Chicharones and Boulder's DJ Rootz.

DJ Red offers something different at the Pearl Friday: "I'm calling the show DJ Red's Funky Fresh ’80s Rewind," he explains. "Here's the deal: Basically, over the last year or so I've had several people ask me to do an ’80s night, but not the typical new wave/pop ’80s -- [instead] playing what I call (albeit politically incorrectly) 'black ’80s.' So this week, it's all about those forgotten funk bands like The Gap Band, The Dazz Band, Zapp and Roger, Con Funk Shun, Midnight Star, Kool and the Gang, Lakeside, etc. I will, of course, be peppering the set with liberal doses of ’80s rap classics."

Think of Red's thing as a warm-up for the mess of hip hop ahead, starting with "The Classic Rock Tour" Saturday at the Red Fox starring Afro Classic with Scarub of Living Legends and Very from US Pros, plus Def Jux originator Vast Aire from Cannibal Ox, Russian rapper Ivan Ives, Double AB from NYC and locals DWI (Damien, Wong and Ink) with Masta Shredda and Mike D.

Sunday at the Fox it's Souls of Mischief from the Hieroglyphics crew out of Oakland, with Swollen Members down from BC, plus Big B, The Dirtball, Common Market and Strong Arm Steady.

My apologies to anyone who read this column last week and decided to go to AkaBella's CD Release Party for their cool new disc, The Beltane Sessions. Due to some confusion on my part, the date was wrong by one week. The show at Redwood Raks with Arcata's favorite all-woman a cappella band (AkaBella) and Guinea Gbe, Berel Alexander and DJ Knutz is this Saturday, Oct. 17.