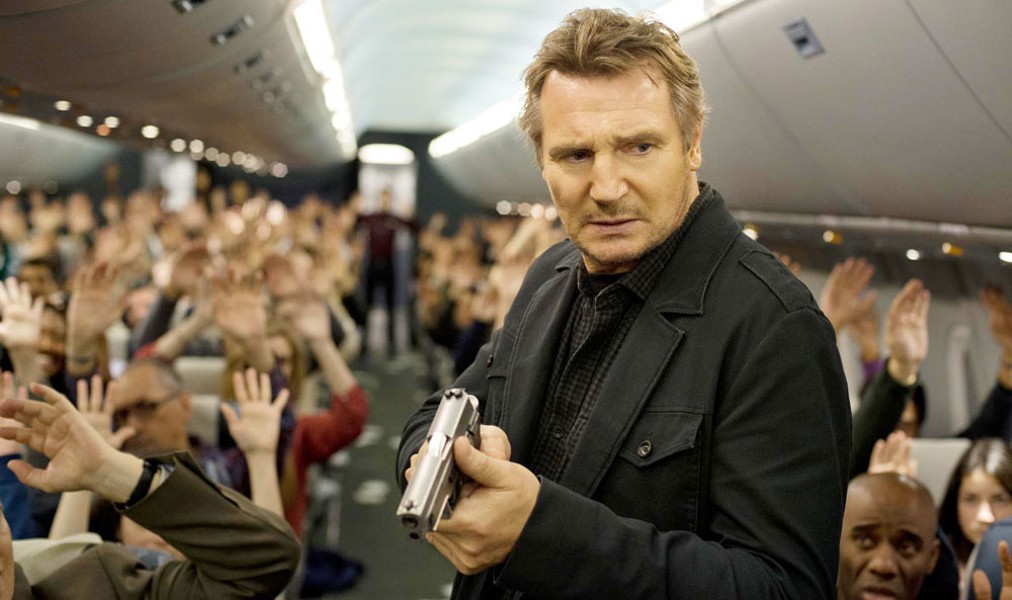 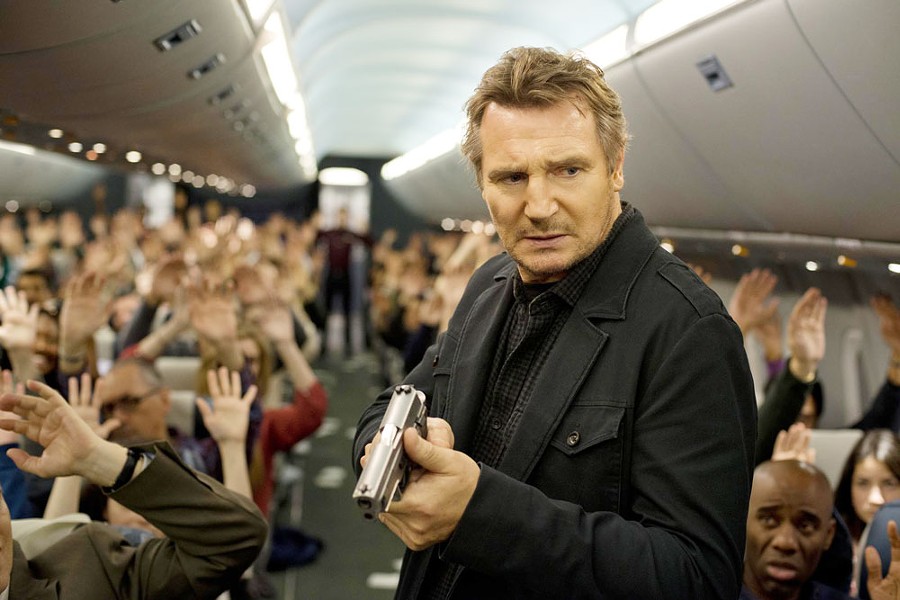 Who wants to be in the sequel?

NON-STOP. I bashfully admit that this marks my first experience with the recently reminted Liam Neeson as action hero. My impression is that he has thrown himself into this late-career badass period to combat his grief at the tragic death of his wife Natasha Richardson in 2009. I'm not sure whether it's the workmanlike approach to acting as therapy, or the attendant sadness and pathos that he brings to the part, but Neeson in Non-Stop makes me inclined to go back and watch a Taken or two.

He plays Bill Marks, a Federal Air Marshal with a drinking problem, money problems and, from his haggard aspect, a few other issues to boot. On a red-eye from New York to London, someone hacks Marks' cell phone, sending text messages demanding a huge payday and threatening the lives of the passengers on the flight. Marks undertakes a solo investigation, and the situation escalates rapidly, embroiling him in a cat-and-mouse game with an unknown antagonist, while he becomes the target of media speculation. Seems his wily opponent intends to assign the blame for the hijacking and subsequent loss of life to Marks.

Granted, this is fairly standard pot-boiler stuff. But thanks to Neeson's performance, a customarily fine supporting one by Julianne Moore and stylish, generally light-handed direction by Jaume Collet-Serra, it transcends most of the clichés that can easily undo a whodunit thriller. Unfortunately, some of the tension and momentum unravel when the third act twist appears, but that does little to dissipate the enjoyment of the rest of the movie. Non-Stop isn't a game-changer: It doesn't break any particularly new ground technically or narratively. But it is an original action movie with a good cast, a clever story and a distinct look. For all of that, I'd put it miles above most of the competition. PG13. 106m.

SON OF GOD. Ever read any of the New Testament? Or heard any of the stories? Maybe watched a cartoon adaptation of some sort? If you answered yes to any of the questions above, you can skip Son of God. Because whatever version of the life of Jesus of Nazareth you've got kicking around in your memory, I can just about guarantee you it is more interesting, more insightful and more imaginative than this.

Cobbled together from a History Channel miniseries, with some new footage shoehorned in, Son of God attempts to tell the life story of Jesus Christ. I take no issue with the impulse: there's plenty of room for a nuanced interpretation of one of the most influential figures in the history of the world. But this ain't it. Rather it's a rush-job of Jesus' Greatest Hits. The first act careens along through some of the classics: Jesus' birth in the manger (his parents were apparently wayward hipsters — or maybe the casting call only reached out to Brooklyn and Portland); loaves and fishes; Lazarus risen; walking on water; overturning the tables of the money-changers. All the biggies.

The second half of the movie is taken up with the conflict generated by the presence of Jesus and his followers in Jerusalem. And, well, we all know how the story ends. But that isn't what concerns me. What concerns me is that this material, which is pretty fascinating regardless of your spiritual perspective, is handled so shoddily, with no insight or real gravity. Sure, the crucifixion is fairly rough going, but nasty as it is, it's still tamed-down for a PG-13 rating, which strikes me as crassly commercial. The direction is artless, the visual effects are the caliber of a mid-1990s CD-ROM video game, and Diogo Morgado as Jesus does precious little more than smile beatifically and smugly bust out miracles. There is no attempt to get at the complexity of the character or the context within which he exists.

I suppose this movie might be useful, were one in a position to hammer the uninitiated over the head with the simplest, most literal version of this story available. Otherwise, there is little, if anything, to recommend it. PG13. 138m.

300: RISE OF AN EMPIRE. Xerxes returns in his golden booty shorts to battle a legion of Greek abs. The 300 sequel promises enough blood spray to make Dexter wince. R. 102m.

3 DAYS TO KILL. A bored Kevin Costner as a CIA tough guy on one final assignment to save his own life and spend quality time with his daughter. Not the Luc Besson action movie you hoped for. PG13. 113m.

AMERICAN HUSTLE. David O. Russell takes a stellar cast, including Bradley Cooper and Amy Adams, back to the '70s for an ambitious and entertaining ABSCAM-inspired caper. R. 138m.

PHILOMENA. Steve Coogan helps Judi Dench track down the son who was taken from her as a baby. PG13. 98m.

POMPEI. If there's a volcano in the first act, you shouldn't have to wait through so much clichéd romance and gladiator kitsch before it goes off in the third. PG13. 100m.

RIDE ALONG. Ice Cube is a scowling cop with plans to terrify his sister's mouthy fiancé Kevin Hart by taking him on patrol. R. 89m.

ROBOCOP. A canned remake of the '80s classic about a cop turned cyborg. Neither the movie nor the robot has the chutzpah of the original. PG13. 108m.