North Coast Night Lights: The One that Got Away

A week ago, I read about a giant fireball visible up and down the West Coast — from the Bay Area north to Washington — as it streaked across the sky. My photo heart ached to have missed that one; I was probably watching Ted Lasso instead… or sitting alone with my thoughts. A month ago, as Earth passed through the tail of a comet, my mother passed away and, well, things haven’t been the same since. I hadn’t really wanted to go out.

But the stories of the fireball knocked off some of the photographic apathy that has been clinging to my bones since then. I have a voice that nags at me, “You can’t bring anything back if you don’t go out,” and it had been growing louder. It’s just that the next time would be the first nighttime photo that I wouldn’t be sharing with my mom.

“Your mom would want you to go,” it added.

So I did. I grabbed my brother Seth and headed to Houda Beach off of Scenic Drive after sunset. Slowly sinking, the crescent moon followed Venus down toward the Pacific; it was a beautiful evening, clearer than predicted. The darkness deepened as night fell, and the heavens took shape.

I’d had a specific idea in mind, but I couldn’t get the angle I wanted due to the surf and we wandered aimlessly for a time as a result. I took a few photos, looking for some inspiration that matched my expectations.

Suddenly, in the middle of one of the long exposures, a tremendously long meteor streaked across the sky.

“Did you get it?” My brother asked. 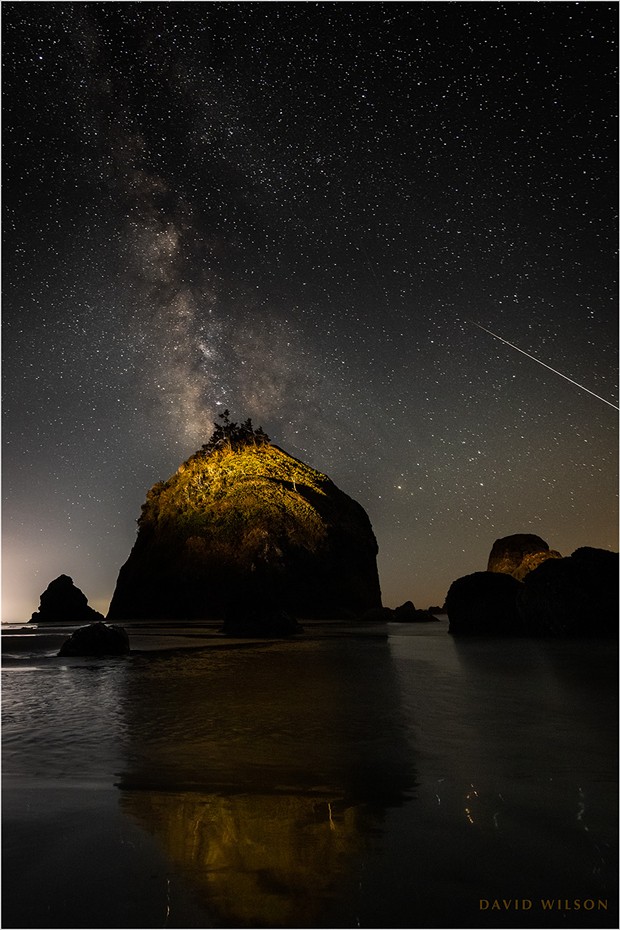 I was afraid not. “I think it was too far to the right.” We waited a few more seconds before the shutter clicked shut. I checked. To my chagrin, I had only caught about half of it; I’d managed to grab a hold of it only by the tail before it escaped off the edge of the frame. Adding to the mess, the headlights of a car on the road above blasted the view at exactly the wrong time, which wasn’t in the plan, though it did allow for a nice reflection — a lot of things that aren’t in one’s control can happen during a 30-second exposure.

My Big One had gotten away. If only I had composed the photo differently. If only.

Moving on, I photographed a little more. There’s plenty of time to talk between shots as the shutter gathers light, and I was about to say something to Seth during one of the exposures when I saw another huge meteor behind him.

“Holy fucking shit, there’s another one behind you!” I yelled. Pardon me, but it was the heat of the moment.

The meteor streaked for about twice as long as my outburst and Seth whirled around in time to see it. Dang it all, though — and wouldn’t you know it? This one wasn’t in my camera’s field of view at all.

They were two of the largest meteors I’d ever seen, only a week after the major fireball, and my brother and I were there to enjoy them. Fittingly, when our mother died the month before, it was during the peak of the Perseid meteor shower, which results from Earth’s passage through a comet’s tail.

I might have missed the shot, but I know it isn’t necessary to capture every moment. One must appreciate what is given us. 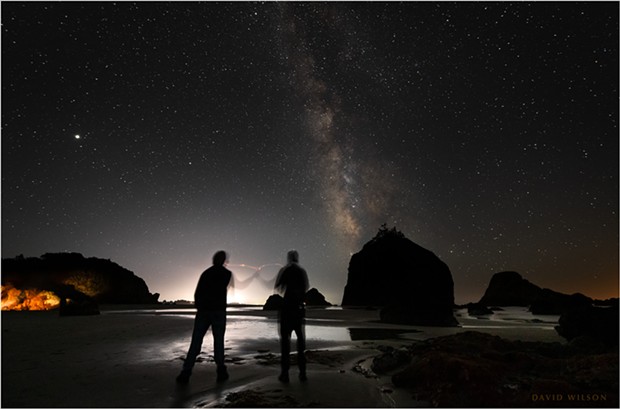