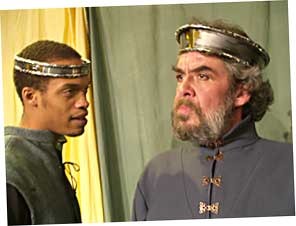 Though the most enduring character in the Henry IV plays is Falstaff (wildly popular in Shakespeare's time and later the subject of a novel, symphony, several operas and Orson Welles' amazing film, The Chimes At Midnight) they are mainly about Prince Hal, and his journey to become the heroic Henry V. The play of that title is the last in the sequence and the most familiar, owing to the movie versions by Laurence Olivier and Kenneth Branagh.

The first play in this sequence is actually Richard II, about the ineffectual king deposed by Bolingbroke who becomes Henry IV. Henry seizes the crown with popular support, at least until he has the imprisoned Richard killed. His reign is then threatened by rebels in the north with their own claim to the throne, and those wars are the substance of the Henry IV plays, particularly Part One, now on stage at North Coast Repertory Theatre.

All of this actual English history was familiar and important to Shakespeare's first audiences, so the very slow beginning of this text was more innately interesting to them than to us. The NCRT production directed by Gretha Omey moves swiftly through this thicket, partly by cutting and moving around text, partly with stripped-down staging, a fast pace and a chorus substituting for several characters.

The outlines of the action emerge pretty clearly, along with at least one of the main concerns of the play: the legitimacy of the king, and of his heir. Prince Hal spends his time not at court but in a tavern, in the company of the fallen nobleman, Falstaff. But when the war begins and Hal's father doubts his loyalty as well as his fitness, Hal passes his first test with heroism on the battlefield.

But what this production gains in speed and force it loses in complexity, characterization, subtlety (important to humor) and ultimately in meaning. Though the actors all have their strong moments (particularly James Read as Falstaff and Lonnie Blankenchip as Henry IV), the presentation tends towards shouted caricature. King Henry and Hotspur (a leader of the rebels) are Angry. Falstaff is Drunk. Prince Hal is Drunk, and then becomes Angry.

This seems a stylistic choice - one that some attendees may favor, particularly those who believe that the bipolarity of broad comedy and one-note melodrama defines theatre. They are likely to also enjoy the stage fights, which are presented with built-in sequences of slow mo. (Let audience members be forewarned to keep their seats throughout the play, however, or risk being run over by actors frequently dashing full-speed through the aisles onto the stage.)

While there is effective stagecraft supporting this approach, for me the most successful scenes were the few intimate stagings: between Hotspur (Victor Howard) and his wife, Lady Percie (Gretha Omey) and especially the reconciliation scene between Henry and Hal (Greag Brown). The reconciliation scene also benefits from a textual transposition, with excised lines moved to the very beginning of the play. But the production ends with a more questionable lifting of lines, from another play (the second part of Henry), transformed into a sentimental elegy for Hotspur, which tends to suggest the play is about him, which it isn't.

Everyone involved can be justly proud of the months of effort that went into this production, and Omey's willingness to take risks is also admirable. But for me, too many key scenes didn't work, in a production that bypasses many of the character questions as well as political and moral questions that constitute the difference between Shakespeare's play and the equivalent of a medieval war movie with better language. As (almost) usual, I urge you to see and judge for yourself.

Within a few months in 1946, the great English actor Ralph Richardson played both Falstaff in Henry IV and Cyrano in Cyrano de Bergerac. Though I missed these performances (as I was busy being born between them) Richardson's biographer Garry O'Connor notes that his interpretation of Falstaff was unique, using "the sensuality ... the roguery and trickery" as "metaphors for an inner vision" of "childish idealism" and a "heartfelt romanticism" akin to Don Quixote. Since in Rostand's play, Cyrano approves of being compared to Quixote, Richardson probably embodied a link between these characters, which as it happened appeared simultaneously on North Coast stages last weekend.

I've come to expect themes of idealism and virtue in the plays the North Coast Prep students select, but I knew Cyrano as mostly a romantic figure from the movies and a musical stage version (which I saw in its pre-Broadway Boston run, after a highly liquid lunch with its lyricist, the novelist Anthony Burgess). The original Cyrano de Bergeracstage play presented in absorbing fashion bythe younger members of the Young Actors Guild dramatized more substantive heroism than I recalled, such as Roxanne's daring visit to the soldiers on the front. Genay Pilarowski (alternating with Rosemary O'Leary) as Roxanne and Caleb McIlraith (alternating with Julian Eubanks) as Cyrano, fully inhabited their roles. Gerald Beck's multi-level set made cunning use of the Gist Hall Theatre, and Jean Bazemore's usual discerning direction was aided by friends who stepped in when she was temporarily hospitalized during rehearsals: Michelle Francesconi, Michael Fields and Donald Forrest.

And with Cyrano's dying words, the idealism was flamboyantly apparent: "But who fights ever hoping for success? I fought for lost cause, and for fruitless quest! ... I know you now, old enemies of mine! Falsehood! ... and Compromise! Prejudice! Treachery! ... Folly - you? I know that you will lay me low at last! ... Yet I fall fighting, fighting still!"