In which Dan the Faller Man escapes the choker-setting life 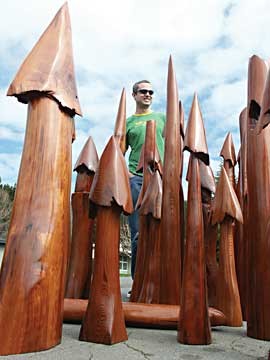 Dan's week-long stint in the Headwaters Forest was just one of many part-time jobs he held outdoors and in the woods while a student at the College of the Redwoods. He gathered and cut firewood and collected shake bolts on the beach. "Beachcomber logging," Dan says. "I had a permit from the county." He turned burl slabs from old stumps into tables, bars and chairs, and cut live burls from living redwood trees. He dug up old logs on the river banks and cut them into boards for carving block and burl box presents. "The heavy winter storms in 1996-97 washed a lot of big trees and logs into the Mad River. We were pillaging then."

He worked for the California Conservation Corps and eventually became a crew leader in the salmon restoration program. "The timber companies logged the top of the hill and we built fish structures down at the bottom to catch the sediment." He had his first paying tree faller's job, working a portable Lucas mill at a house site. The faller on the job showed Dan how to limb and buck downed trees into log lengths and eventually how to cut them down. Dan recollects a job from his semi-pro days.

"I was working with a guy falling trees. He was cutting and I was jacking [using a hydraulic jack in the cut of the still-standing tree to bring it down in a specific direction]. I had begun to notice that previous stumps he'd cut were hideous. I was getting nervous cutting trees with this guy.

"So he makes his cut, walks away and I approach the tree to install the jack but the tree is already making the popping and groaning noises it does when it is starting its fall. But it wasn't moving yet. I didn't know what it would do. While I'm setting up the jack, he comes over and says, 'Sounds like hippie music.' That was a rough crowd.

"I wasn't done when the tree started over. We were jacking through some little trees and the branches started to rain down all around me. I grabbed the jack and ran, and they are falling all around me until finally one just clubbed me and laid me out. I got swatted like a bug. It made me want to go back to school."

Dan transferred to Humboldt State in 2000 ("the commute was easier") and entered the forestry program. He also went to work for the City of Arcata as a forest technician. The City owns a portable Wood Miser band saw, and Dan cut lumber for bridges and trail structures under its Non-Industrial Timber Management Plan (NTMP). After graduating Dan spent a summer in the Tongass National Forest in southeast Alaska. He saw wondrous things.

"I was on one island where the logging roads were built from crushed pure white marble and ran like white streams for miles in the green forest. Right in the town of Ketchikan was a little stream where I fished. The scene was what I imagine Humboldt County looked like 100 years ago. The salmon were so thick you could walk on their backs, and those fish stocks in Alaska are 5 percent of what they used to be. I counted more than 30 eagles around the little cove foraging on dead fish and parts left by the fisherman. The eagles are like crows in Alaska."

I ask Dan what the worst thing about Alaska was. He was there from June to September and I expected him to mention the biting insects. Rather, it was a biting plant called the Devil's Club. It has thorns on its stem an inch long. It also has tiny spines under the leaves that can pierce jeans. The spines have a chemical that causes rashes and infections. I then ask Dan about the scariest or freakiest experience he had in Alaska.

He tells me that he was by himself in the woods flagging a unit, demarking an area for the next harvest. He had just hung a ribbon flag and happened to look over to his side. According to Dan, there was a huge black bear no more than 30 feet away. It was kind of resting, crouching down on all fours, and just looking at him.

"He looked very relaxed but I was not. Well, they tell you not to run. I told myself not to run. The first thing I did was run."

Dan was on the edge of a clearcut and so he ran into out into the opening, climbing across slash piles from a previous harvest. He stopped and turned around to look to see the bear loping after him out into the clearcut. It just stopped. They were in a muskeg — a peat bog — and there was a pool of water between Dan and the bear.

"What does he do? He flops in the water, and rolls around in it just like a dog. Then he got up and left. The rest of the day I was hearing and seeing bears everywhere, even though there were not any."

Then he recounts: "I'll tell you the most dangerous experience I've had in the woods. It was just a few years ago.

"I had caught up on the falling and so I was setting chokers down in the hole. The Caterpillar was on the trail above me and the choker was set on a 32[-foot] log. Well, the log was moving but I saw that it was going to get hung up, so I signaled to the operator to stop. It appeared stable, so the slack was drawn down. I went to unhook the bull-line [the main cable back to the bulldozer] from the choker and to my horror the log rolled back and up, taking the slack out of the line — which was on the ground under me at that moment. The steel cable dragged up alongside my body, and fortunately the big steel hook on the bull line missed my head by inches. But then the line caught me under my chin and lifted me up by my head. It tossed me like a rag doll. I was scraped all along the length of my body and I had a headache for a week."