Not Another Winter to Wonder 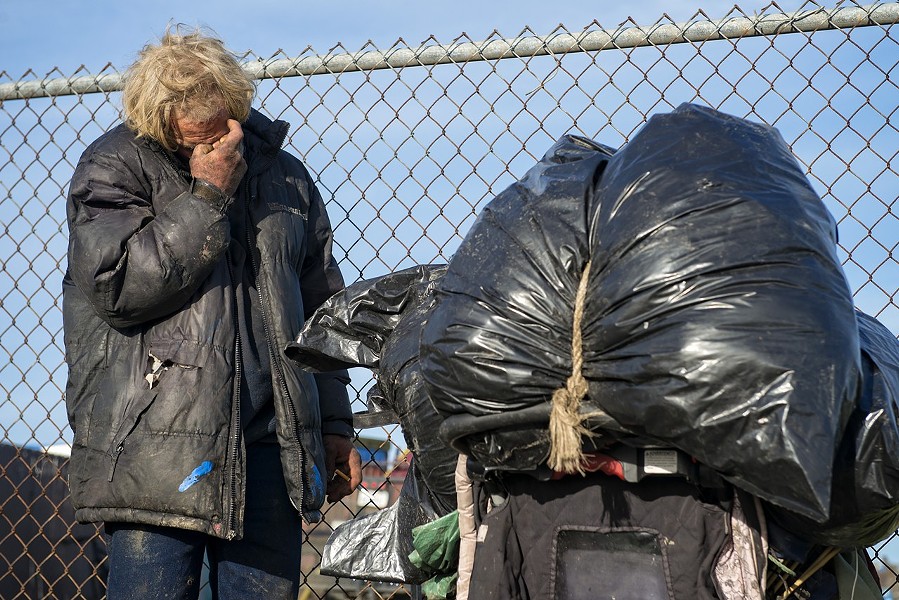 I am one of the coordinators of the extreme weather shelter group in Southern Humboldt. Last year was our first year of sheltering. We opened the doors in alternating churches 17 times in an unusually wet and cold winter. We supplied sleeping bags, mats, clothing, hygiene supplies and food each time we sheltered. The same 12 to 15 people showed up, mostly men. Our criteria for opening was 34 degrees or below.

Each event involved three days of coordinating, cooking, cleaning and overnight duty in varying degrees for each volunteer. This year is different. The temperatures have been higher and rain has been scarce. We sheltered twice when the forecast was 28 or 29 degrees, but it never got below 36 on those nights.

I see the same people come in. I wonder how they survive. The men seem more and more broken. The women seem exhausted but better able to take care of themselves.

We continually buy sleeping bags because many bags get stolen or wet in the camps and we give them to those who need them. We go through a lot of socks because people can't wash or dry them.

I'm supposed to feel good about helping people survive these cold temperatures but I mainly feel like our efforts are futile. I know they are out there on all the other nights.

Something good does happen on shelter nights. The guests are tired but grateful and polite. The volunteers get a sense of altruistic warmth and connection. We all get to know each other a little.

But the crime of reducing a part of the population to a place of no options is not acknowledged. There is a kind of acceptance in volunteerism for propping up the idea that certain people just don't have what it takes to have a home.

The crime originates in bad public policy and the erosion of human services. We know where all the money is but it is not available for housing or health care. The attitude that is encouraged in politics and the general public is that jobs and opportunity are everywhere but the homeless are too lazy to pursue them.

Basic support of human life requires shelter from the elements, a way to stay warm or cool, a safe place to sleep, regular nourishment and clean water, companionship, acceptance and respect in society and the right to privacy and personal possessions.

This should not be difficult. We do this for animals in most communities. There are publicly-owned properties, buildings and state parks that remain unused for years. We have emergency plans in place to house and care for people in natural disasters but there is befuddlement about how to shelter the 2,000 or so homeless people we have in Humboldt County. Safe and secure camp sites with showers, toilets and "warming houses" with communal kitchen facilities have functioned well in other communities. These sites could also include small inexpensive houses. It is really not about money. There is money in the state coffers for homelessness that is stuck in red tape. I recall that there was extra Measure Z money that needed to be used. Was shelter even on the agenda or in the budget?

I see our disenfranchisement of the homeless as the most painful and central issue facing our county and our nation. It is not even in the national conversation among politicos. While government officials take measures to push people around or out of their communities, the inevitable public health and social issues expand. Hepatitis A has infected and killed people in Los Angeles and San Diego because of human waste contamination. There is speculation that cooking fires from homeless camps could have started the fires that raged in Southern California. Homelessness feeds the heroin and opioid epidemic because homeless camps are magnets for predatory drug dealers.

While we leave people on the streets with no options, in a category that renders them unwanted wherever they are, the way we see ourselves changes. I worry that this callousness can be passed on to the next generation. If some Americans are vulnerable to losing everything, I think we are all at risk.

We have many models to draw from and so many local resources in land and infrastructure. If there is strong leadership from county and state government, I think the response from the community will be powerful and compassionate. The official declaration of a shelter crisis will legally open up opportunities for the county and citizenry to work together on solutions. It may seem a daunting task but, once begun, I believe it will accelerate in the wonderful ways that human beings operate when they help each other out. Let's not spend one more winter wondering what can be done.