Not Even From Around Here

Who's afraid of the Bulgarians? 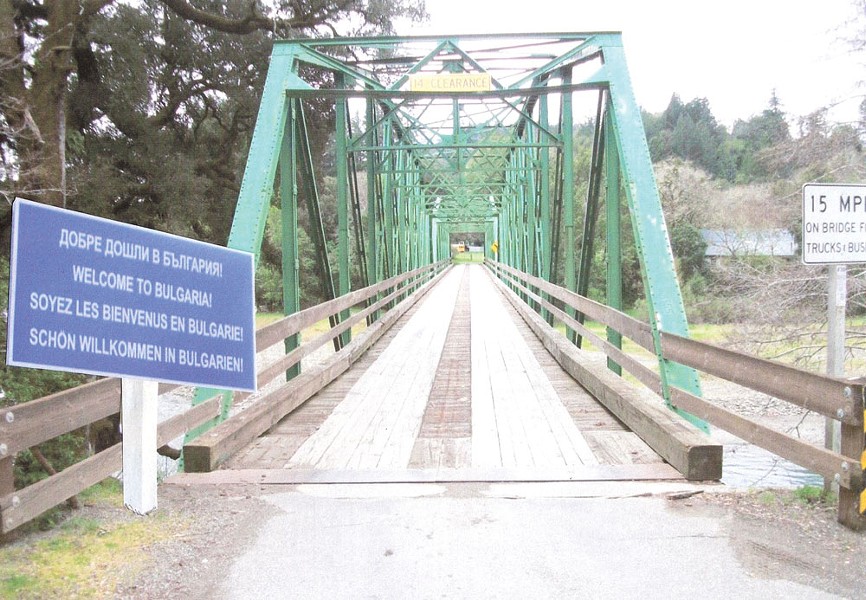 I get alarmed calls every week about the Bulgarians. They're paying exorbitant sums for property in Petrolia, Bridgeville and Alderpoint, I'm told. They're jogging along rural roads with automatic rifles strapped to their backs, according to one woman at a recent community meeting. They're buying out family ranches and slowly taking over the county. And — although absolutely no proof has been offered from either my tipsters or law enforcement — they're all somehow connected to an organized crime cartel.

Shocking stuff, to be sure. And maybe at least 40 percent true. There is an established trend of Eastern Europeans buying property in rural Humboldt County. I don't even have to scan the rolls of the county assessor's office to substantiate this, I just have to go home to Honeydew and sit on the store porch for a while. As for the rifles and the cartel rumors, hey, they could be true, too. It's not that I don't believe you, neighbors, it's just that I think this Bulgarian mania is a symptom of an ugly, hypocritical xenophobia, and I'm a little embarrassed that you don't see it.

When my grandmother was a girl in Depression-era Ferndale, she was taught to shun the newly-arrived Portuguese immigrants. They were, she was told, "not white" and "not from around here." A century later, the passage of time has smoothed the bite of this. Ferndale institutions are proudly peppered with Portuguese last names. Every May, the community gathers to celebrate the Festival of the Holy Ghost. Ferndale proves in miniature what sociologists write large on American history — that communities are strengthened rather than dissolved by immigration and inclusion.

We have had Bulgarian and Polish neighbors in Honeydew for almost 20 years. I have yet to see proof that they're exploiting the Green Rush with more rapacity than the Colombians, the Floridians, the New Jersey-ites, the Los Angelenos, the Mexicans, than any other group of "outsiders" that arrive every day. And they're not doing anything different than the good ol' boys have been doing for years. You know the good ol' boys I'm talking about: my cousins, your sons, our neighbors. Probably a few third-generation Portuguese families, too. Taking the long view of history, those Bulgarians may well be good ol' boys in a few generations, the children of hard-working immigrant entrepreneurs who had the vision to get in on the ground floor of the pot economy.

Granted, the pot economy is not pretty, but neither was the gold rush, nor the timber rush. There are lots of problems in the weed industry, but the main problem isn't the who, but the what. Time spent pointing fingers at the people who talk and look different than us is time wasted. Time spent actually getting to know your neighbors, convincing them to drive a little slower or showing them how to store water, is incremental work, but it's ultimately more productive. And if you have proof that Eastern Europeans specifically are eroding our culture and landscape, for goodness sakes, bring it to me. But don't cry "Bulgarians!" as a shorthand for your fear and insecurity.

A few weeks ago I ran into a neighbor who had read my article on mixed-light grows and light pollution. He liked it! He agreed with me! It was thrilling, to be honest, and now he says there's at least one less greenhouse blurring the night sky in the Mattole. But his buddy the next ridge over had dismissed it at a glance.

"She's not even from around here," he said.

Editor's note: In the interest of full disclosure, Linda Stansberry has had Bulgarian neighbors since the 1990s and in the past happily accepted gifts from them. Specifically, one of them gave her a Walkman for her 10th birthday, back when a Walkman was expensive and pot was much more illegal than it is now. Make of that what you will.