Being the local "bug guy," I was recently asked about a spider that looked "almost exactly like a black widow" but lacked the distinctive red hourglass on the underside of its abdomen. This is a spider with which I am very familiar. They were nearly everywhere where I grew up in Pacifica, California. I hadn't seen any hereabouts but I was fairly confident what was being described was a female "false black widow" or Steatoda grossa. Although in the same family as the notorious mate-killer, this spider is much less dangerous and is usually timid. Neither are they the typical jet black of the widows, but usually a dark maroon.

I was discouraged at the time because I didn't have any photos of the species and a tour of my yard didn't turn any up either. That was until two days ago, I looked over the door to my bathroom and there she was. I collected her, took pictures and let her go. This is a nearly harmless species which is beneficial in that it destroys other spiders and pest insects.

My most recent amble along the Van Duzen turned up several California spreadwing damselflies (Archilestes californica) and a single variegated meadowhawk dragonfly (Sympetrum corruptum) that was too agitated to get a shot of perched, but who did hover just long enough to get a shot of in the air.

A single Mylitta crescent (Phyciodes mylitta) put in an appearance. The larvae of this cheerful little orange and black butterfly feed mainly on thistles and their relatives. 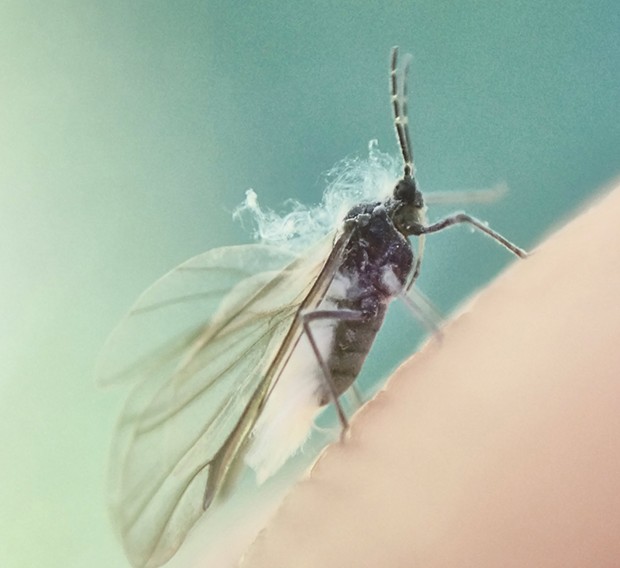 While I was doing a bit of outside work atop a ladder, several tiny chalk white dots flew with slow grace. They often appeared almost magically as they meandered through shafts of sunlight and then disappeared into the shadows. They were out of range of my cameras and I was too busy to investigate.

The following day, however, when I saw them again, I was armed with a good camera and had my feet firmly on the ground. I reached out and scooped one from the air. On the wing it looked more like a tiny bit of ash than a living thing, but in hand it turned out to be a "wooly aphid," most likely of the subfamily Eriosomatinae. They grow tiny white filaments of waxy exudate. Many members of this group cause galls on herbaceous plants and can carry plant diseases.

A tad farther along, I saw a damselfly. On downloading the photos, I thought it might be an Emma's dancer, the only lavender insect I know offhand. But this specimen had blue patches on it and a few minor markings didn't quite match, so I posted it in a local Facebook group and got an authoritative ID from an expert. This was not an Emma's, but a vivid dancer. In this case, the word "vivid" is not just descriptive; it is actually its name (Argia vivida). Its unusual color may be from it having gotten cold.

I saw two grouse locusts, which resemble tiny grasshoppers to whom they are closely related. At about half an inch long, they can be found along stream banks where they eat algae from the rocks. Unlike their larger relatives, they can and do overwinter.

Finally, a flower fly caught my eye nectaring on a coyote bush. Mimicking a wasp's black and yellow warning coloration may give this inoffensive species some protection from predation.