Public defender testifies he lawyered but can't provide any documentation 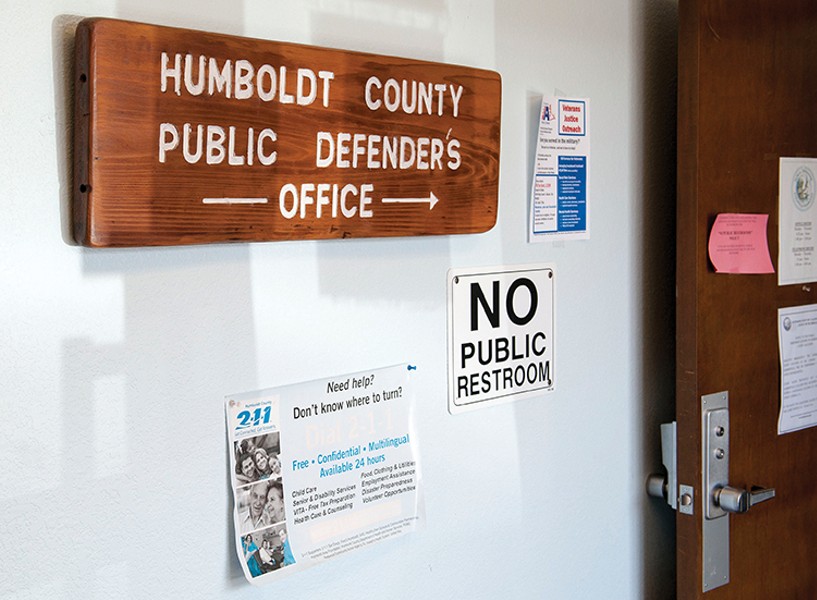 File photo The Humboldt County Public Defender's Office has been mired in conflict since the Feb. 8 hire of David Marcus as its chief.

Local attorney Patrik Griego refiled his lawsuit last week, alleging that Humboldt County Public Defender David Marcus fails to meet minimum state qualifications for his post. And this time, Griego is using Marcus' own words against him in arguing that he is unqualified to represent the county's indigent defendants as the chief public defender.

Last month, visiting Judge Marjorie Carter dismissed the lawsuit but gave Griego the option of refiling after Marcus' July 3 deposition. While Carter said she was tempted to deny the county's request to have the suit dismissed and "get on with this," she said the deposition would likely help inform Griego's suit by further clarifying Marcus' work history.

The heart of the suit rests on a section of the California Government Code that requires a public defender to have been "a practicing attorney in all the courts of the state for at least the year preceding the date of his election or appointment."

Marcus, who served as Lassen County's chief public defender from 2005 to 2011, was working primarily as an insurance claims adjuster in Florida in February, when he was hired by the Humboldt County Board of Supervisors. The county is arguing that the state statute simply requires an attorney be licensed to practice law in California courts and that, because he kept his bar license active and was doing some remote contract work in Florida, Marcus meets the threshold.

Griego, on the other hand, argues that the statute requires an attorney to have actually been practicing law inside California courts and, in the amended complaint, raises questions about whether Marcus was even practicing law during the year preceding his appointment.

Marcus' short tenure in Humboldt County has so far been shrouded in controversy, with members of the local defense bar speaking out against the process that led to his hire, employees of his office sending letters to the board alleging he is incompetent and unqualified, and, most notably, Griego's lawsuit.

On his resume submitted to the county, Marcus represented that he'd been working as a contract attorney specializing in transactional real estate and property loss consulting since 2012 with the firm Cella, Lange and Cella, in which Marcus' close personal friend is a partner. But Marcus claimed to have only spent about 10 hours a week working for the firm and reported receiving no monthly salary.

During the July 3 deposition, Marcus testified that he worked on four cases for the firm between February of 2016 and his hire in February of 2017. But the public defender conceded he authored no pleadings, made no court appearances in the cases, didn't maintain malpractice insurance and hadn't been paid for any of his work. Pressed by Griego, Marcus testified that he wasn't even under contract with any of the clients or the firm itself. But Marcus said he expected to get paid for his work once the cases concluded, though there was no formal agreement as to how. Rather, Marcus said he and the firm had an oral agreement under which, once a case concluded, they would negotiate compensation based on his contribution to the case and its ultimate disposition.

"Did you keep track of your time for the work you did for the Cella law firm for the year prior to being appointed public defender?" Griego asked.

"Nothing in writing," Marcus answered.

"Well, when you say nothing in writing, of course my follow-up question is how, if at all, did you keep track of the amount of time that you spent working for the Cella law firm?"

"Can you tell me from those mental notes specifically dates and times that you worked for the Cella law firm for the year prior to being appointed public defender?" Griego asked.

"Can you tell us specifically which months you did work for the Cella law firm for the year prior to being appointed public defender?" Greigo asked.

Under further questioning, Marcus testified that the bulk of his work on the four cases came in the form of a meeting with his friend, Christopher Cella, who came out to visit him in Florida in September of 2016. During the visit, which Marcus described as partly social and partly business, Marcus said he reviewed legal briefs for three of the cases and gave Cella input. Additionally, he testified that he may have participated in a couple of conference calls with the clients in the cases.

At one point in the deposition, Griego goes month-by-month for the year-long period preceding Marcus' hire in Humboldt County, asking Marcus if he recalled doing any legal work that month. Marcus replied that he was "not positive" or "not sure" for every month but September, which included the meeting with Cella. But under cross examination by County Counsel Jeff Blanck, Marcus testified that he was confident he did legal work in each of those months, he just couldn't recall precisely what it was.

In an interesting tidbit that's unlikely to impact the case, Griego asked Marcus if he'd tried a murder case before. Marcus replied that he had, most recently back in 2002 or 2003, when he was a deputy public defender down in San Bernardino County. Later, after the deposition appeared to come to a close, Marcus met privately with Cella — who is representing him personally in the case — and Blanck. After the brief huddle, Marcus told Griego he wanted add something on the record.

Then, Marcus told Griego he believed he'd been mistaken about that murder case. It went to trial as a manslaughter case, he testified, and it was in 1996 or 1997. "I can't remember for sure," he said, "but I wanted to clarify that."

In his amended petition, Griego makes clear he's dubious of Marcus' testimony. He makes repeated reference to Marcus having "falsely claimed" he'd worked for Cella, Lange and Cella for the year preceding his appointment. But even if you look past the lack of a paper trail or documentation and take Marcus' testimony at face value, Griego argues he's still unqualified for the position.

When the bill laying out the qualifications for a public defender first passed the state Legislature in 1921, its advocates had determined "that the public defender must have practiced in all the courts of the state for the year directly preceding appointment, including superior courts where felonies were tried, police courts, and justice courts where misdemeanors were tried and where preliminary examinations" were held for felony cases.

It's clear, Griego argues, that the statute was intended to ensure a public defender had immediate experience practicing in criminal courtrooms.

Interpreting the statute differently, the county argues, would "necessarily mean that an attorney is only eligible for the office of public defender if the attorney had made a physical appearance in literally all California courts, including every superior court in all 58 counties, every division of the six districts of the appellate court, as well as the California Supreme Court. This is an impossible requirement to meet ..."

The county now has 30 days to file a response to Griego's amended petition. Marcus did not respond to a request to be interviewed for this story but previously told the Journal via email there "was and is no basis for the suit" and that he loves this community and looks "forward to being of service to it for years to come."