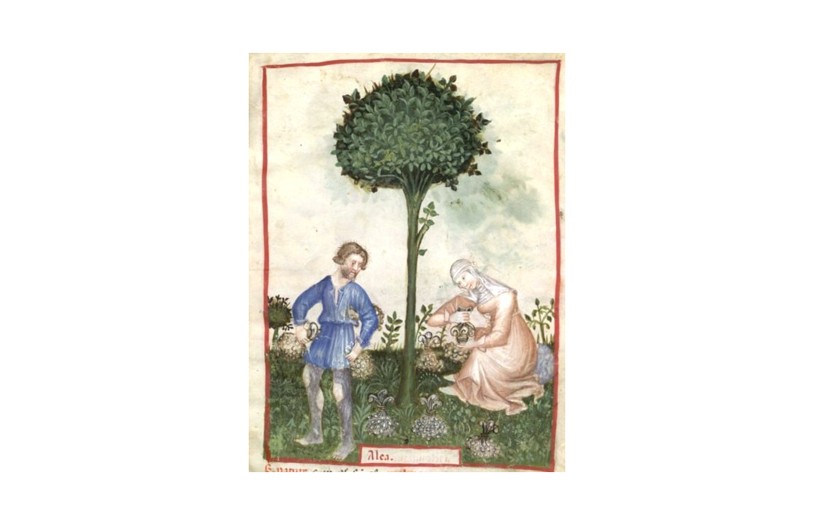 Nov. 18. Among the summer bulbs soon to be available, none is finer in our climate than the dahlia. Why it flourishes here is something of a mystery; one pictures it in warmer, nearly tropical settings, but somehow it has decided that the seaside works well enough and it thrives, putting out flowers larger than cabbages and almost as dense. To deny oneself dahlias would be a crime; it is exactly the sort of luxurious excess we will crave come summer.

Nov. 19. Agricultural scientists have come to the realization that cows produce such vast quantities of ammonia because of a bacteria that kills an important amino acid. Hops, which were originally added to ale to kill bacteria, carry out the same antimicrobial function in the stomachs of cows, thereby reducing the quantities of ammonia they produce. Anyone who has ever relieved a nervous stomach with a pint of beer will understand the inspiration behind the scientists' research.

Nov. 20. A fine Thanksgiving tradition has emerged at our local farmers' markets: We arrive with extra bags and a fatter than usual roll of bills, shop for our Thanksgiving dinner, thank the farmer for her service all season long, and stagger home under the weight of our beets and our Brussels sprouts. In Manhattan one must go around and tip doormen and building supers at the holidays; here we tip our farmers.

Nov. 22. Peas can be planted at any time. If they spend the winter putting down roots, they will be earlier and more vigorous come spring.

Nov. 23. One local barber advises his customers to simply put the cat outside before they leave on vacation. He points out that a cat, being resourceful, will always find something to eat, and will always be waiting on the porch for its owner's return. While this is undoubtedly true, he has yet to bring a single customer around to his methods of cat-rearing.

Nov. 24. Anyone who claims not to like Brussels sprouts has not had them prepared in this manner: Trim them and slice them in half, then cook them face-down in a hot iron skillet greased with good olive oil. Add peeled whole shallots, pearl onions or garlic to taste, along with salt and pepper. Once the cut sides are brown, shake the pan, then roast it in the oven at 450 degrees for about half an hour. Some people finish the dish with a dash of balsamic vinegar or red wine, allowing the heat of the pan to reduce the liquid, but even this small flourish is unnecessary.

Nov. 25. Thanksgiving. Mark this as the day you came to love Brussels sprouts.

Nov. 26. The term "Black Friday" has become affixed to this traditional post-Thanksgiving shopping holiday. It marks the beginning of an anxious season for shopkeepers, who fall victim to our procrastination, our indecision and our irrational need for ever-deeper discounts on ever-cheaper electronics. It would do us all good to shop for the homemade, the hand-crafted, the odd, unusual and uniquely local token of remembrance.

Nov. 27. The tallest building in Albuquerque looms 22 stories above that city.

Nov. 28. Birthdate of Samuel Clemens: novelist, wit and inventor of a little-known board game primarily kept in glass cases in museums. The game, called Memory Builder, so excited Clemens that he set aside work on a novel called The Adventures of Huckleberry Finn to complete it. He hoped to make a fortune from sales of the game, but because it depended upon each player possessing a vast store of historical and scientific knowledge that could be readily displayed in a social setting, the game was played by almost no one.

Nov. 29. If you are sufficiently recovered from the Twain festivities, it is now time to celebrate the birthdate, in 1832, of Louisa May Alcott. She is not known to have invented any board games.

Nov. 30. Brussels sprouts can also be shredded and sauteed in olive oil, garlic and slivers of wild mushrooms, then tossed with pine nuts. Anyone who claims not to like Brussels sprouts after this treatment simply does not deserve them.