Plus: Janiva Magness and inaugural happenings 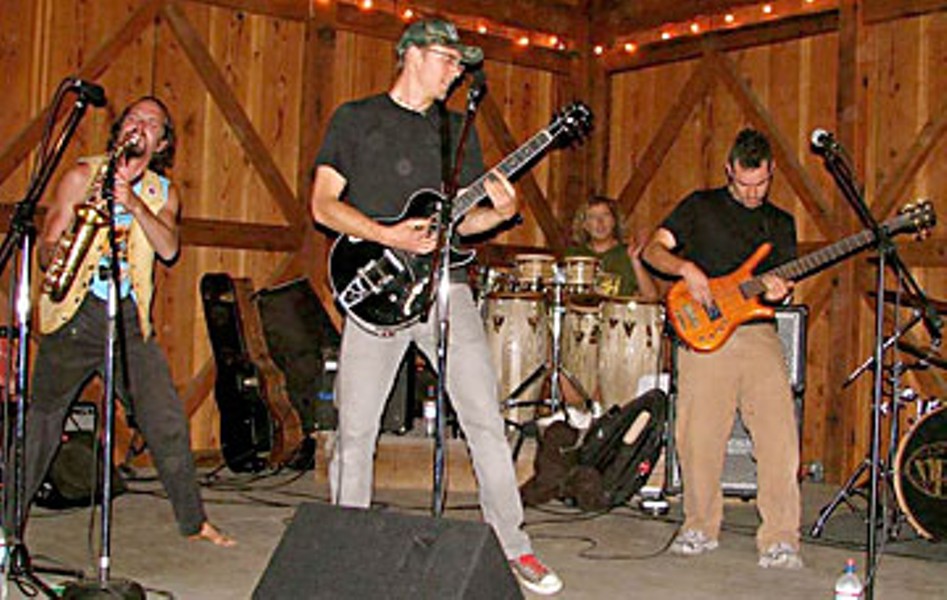 It was five and a half years ago when I met the self-described “Humboldt independent high-energy dance-rock quintet” called NPK backstage at Reggae on the River. A lot has happened to the SoHummers since then: Members went from 20-something to 30-ish, babies were born, the band grew from a trio and recorded three full-length albums. Their latest, The Current, is set to debut officially Thursday, Jan. 22, with the requisite CD release party at the Mateel (with Sub Sab and This Dying Wish). But first, there’s a benefit for Humboldt Surfriders, Friday night at Humboldt Brews.

Benefits are something NPK does well. As guitarist Tanner Speas explained, “When we did the second album, Attraction/Reaction, we put together the ‘Southern Humboldt World Tour.’ We played two or three times a week for about a month and a half, played all the little rural neighborhoods in the area organizing benefit shows for volunteer fire departments, schools, environmental and civil liberty organizations, youth groups, all the nonprofits we could help. In the end, we raised about $50 grand. That established a reputation for us and it also gave what we do more meaning. If all you are is a band trying to get people to come watch what you do, that’s not much. What we try to do is connect with bigger purposes.”

While some of the band’s songs are about partying and relationships, they also touch on more serious subjects. “I try to write about issues that are on my mind,” said Tanner, “things that are happening in the local community or in the world. We have a song on the new album called ‘Frog in the Pot.’ It’s basically talking about the climate crisis and my emotional reactions to that. We had a song about the same subject, ‘Drive to More,’ on our last album. I used the analogy of this thing in our culture where people step on the gas to try to get there faster, do more, achieve more, that kind of motivation, when it really all ties back to fossil fuel consumption. And where does that really lead us? Nowhere in a hurry.”

As noted here last week, blues singer Janiva Magness is headed somewhere in a hurry — to the Riverwood for a show this Saturday, then in May to the Blues Music Awards, where she’s nominated for four awards including “Album of the Year” for her latest on Alligator, What Love Will Do, and “Entertainer of the Year.” She’s won a BMA before — for “Contemporary Blues Female Artist of the Year” — but that does not mean she’s on easy street.

“I have a very rich full life these days. I’m grateful for that,” she said when I called her L.A. home. “Some days are better than others. I will say that being a musician or a blues artist is not for the faint at heart. It’s an intense struggle, and it can be really really glorious.

“The landscape of playing live music, doing it for a living, has changed, and that includes the blues. I have this theory: Blues music has always been around and will always be here. How that happens changes as the world is changing, but people really need live music; it’s such a tremendous healing force. People need to hear real people playing real instruments; it’s about human connection. And blues is the music of the people, so it’s not going away.”

It’s a rare a week that goes by in Humboldt without a major reggae or dancehall show. This week it’s the ever-so smooth vocalist Barrington Levy on Wednesday, Jan. 21, at Toph’s House in Benbow (an early show with DJ Selecta Prime on at 8). Coming to Toph’s Tuesday, Feb. 2: reggae-pop icon Maxi Priest.

Fickle Hillbillies’ guitarist John Chapman called to note an addition to that band’s Saturday show at the Red Fox: It’s now a double bill with The Miracle Show (who also play Friday at Mosgo’s). “We’re doing this with them because they’re more of a draw, being a Grateful Dead cover band and all,” admitted Chapman, noting that bass player Norman Bradford plays and sings in both bands. A reminder, despite the name, the Hillbillies play rock, so don’t expect any old timey or bluegrass.

For bluegrass on the alt. side with fine pickin’, tight vocal harmonies and an occasional Dead cover, check Greensky Bluegrass, a string jamband from Kalamazoo on the road behind their fourth album, Five Interstates, taking the Arcata off-ramp for a Monday night show at Humboldt Brews.

That Monday, Jan. 19, is Martin Luther King Jr. Day, with added significance this year. The local chapter of the NAACP is holding their usual lunchtime celebration at the Adorni Center starting at noon, with the theme “I See the Promised Land.” They’ll have speeches, poetry and music, including the new Spanky and Our Gang, which includes Spanky McFarlane and my friend Karen Dumont, plus Karen’s new vocal group, Echoes of Glory, with Donna Landry and Doug Vanderpool among others.

As I’m sure you’re aware, next Tuesday marks the (final) end of one administration and the (hope-filled) beginning of another, and Humboldt County is ready to celebrate. Professional scene-ster and part-time musician Terrence McNally tells us of one end-of event: “Area bands Side Iron and Magnum [of which T-McN is a member] are joining forces at the Alibi for Operation Mission Accomplished: a Tribute to the Nation’s 43rd President. ‘This is historic times,’ George Walker Bush once quipped. This is indeed. On Tuesday Bush leaves office after eight years of protecting Americans from internationalism, the U.S. Constitution and the Democrat Party. Both bands opted to take their message of decisiveness and OB/GYN love directly to the most liberal corner of the county. Songs such as ‘Shock and Awe,’ ‘I Ain’t One for Fancy Talk’ and ‘Where Wings Take Dream’ will be performed. Attendees are encouraged to keep hope to a minimum.” Note: The show is not on Inauguration Day, it’s Saturday, Jan. 17, at the Alibi.

Tuesday, Jan. 20, is The Big Day and there’ll be dancing in the streets in D.C. and around the world as Barack Obama is inaugurated as our new president. Locally we have a number of options: Jambalaya has an “Inaugural Ball” to be broadcast live on KHUM with deejay Mike Dronkers as host. Supplying the musical soundtrack at the Jam: Absynth Quintet and The Sundown Poachers from Siskiyou County. Says Mike-D., “It’s going to be mayhem, but mayhem for, by, and of the people.”

Humboldt Brews’ Inaugural evening has kick-ass foot-stompin’ Americana from Rev. Peyton’s Big Damn Band, with UKEsperience opening. You’ll find more American music across town at Muddy’s Hot Cup that night as our own Striped Pig Stringband plays host to The Flat Iron Stringband on their biodiesel-fueled “Hard Times in the Country” Winter tour. FIS’ hope is that “down-home music that everyone can relate to” will “bring people’s hearts back to the music of Appalachian barn dances ... just as the Carter Family spread the ‘Sunny Side of Life’ to Depression-era families through the radio waves...”

For American music of a different stripe, check the Myka 9 “Welcoming in a New Prez Party” at the Red Fox Inaug Night. Myka has Humboldt connections (he worked with J the Sarge and DJ Drez as Magic Heart Genies), but he comes out of the legendary Freestyle Fellowship and the L.A. Good Life/Project Blowed scene. He’s on The 1969 Tour, behind an awesome new disc named for the year he was born. He’s trading rapid-fire rhymes on the road with the likes of Sole (from Anticon), Ceschi and Factor (from Fake Four Inc.) plus Meeting of the Minds.

Dell’Arte hosts an Inaugural Ball at the Carlo including a replay of Obama’s inaugural address (the real time ceremony starts at 11:30 a.m. D.C. time). Aretha Franklin sings at the Washington version; The Bayou Swamis play in Blue Lake, where you are invited to come dressed as your favorite politician and contribute something warm to a “Brother, can you spare a dime?” clothing drive.

“Hope” is the word of the day. Keep it alive.