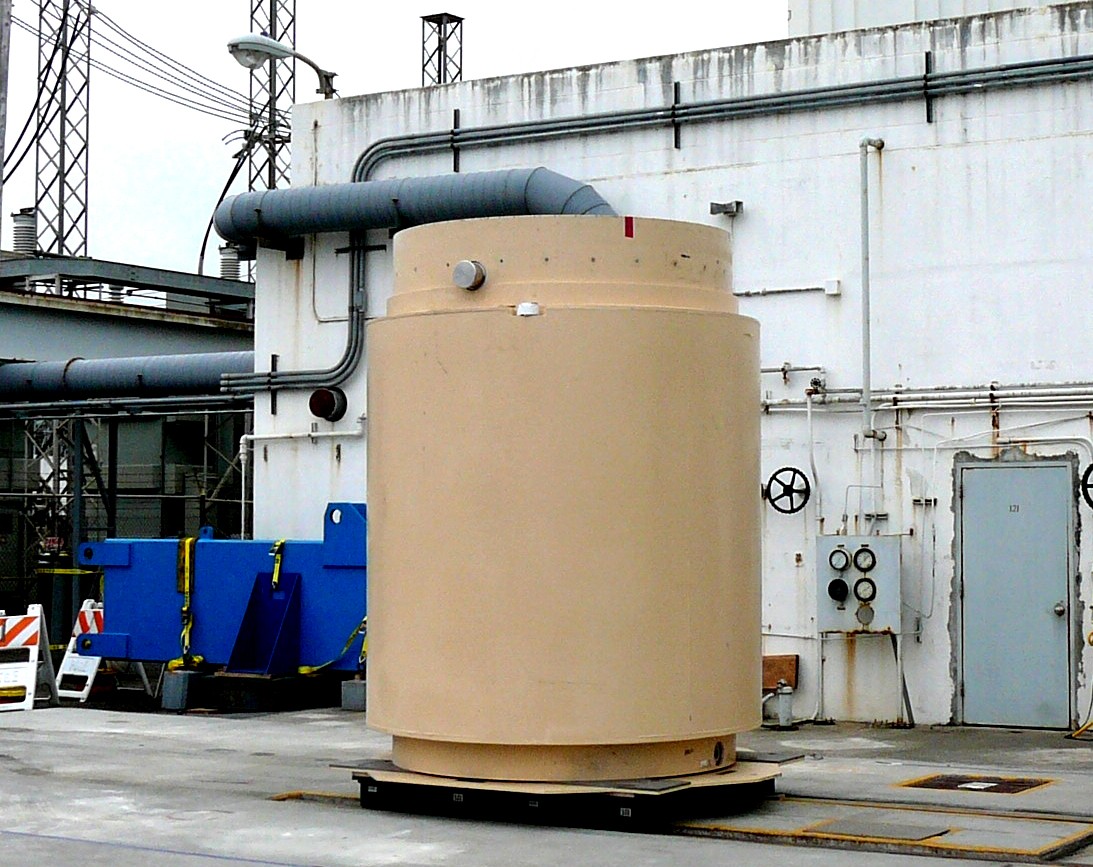 After only 13 years of nuclear power generation, PG&E shut down the Humboldt Bay nuclear reactor in 1976 due to seismic concerns. Two years ago, contractors at the site loaded five dry storage casks (photo) with the remaining hot (radioactive) spent fuel rods. "Dry" here means the rods are surrounded by inert helium gas, as opposed to the stainless steel water-filled pool where they had lain for the previous 35 years.

The rods will probably remain in the casks for several decades, since the U.S. Nuclear Regulatory Commission recently gave its blessing for on-site storage of spent nuclear fuel. In its report, the NRC said that pools and dry casks are safe for "at least 60 years beyond the licensed life of any reactor." Which essentially legitimizes the facts on the ground, since there's nowhere else for the stuff to go.

Yucca Mountain's dead. After 20 years and $9 billion dollars of scientific research and political infighting, the remote site in Nevada is now off the list as a permanent repository for the country's nuclear fuel waste. Not that there ever was much of a list. Ten potential sites were whittled down to three during the Reagan administration, and Yucca Mountain has been the sole candidate site since 1987 -- until the Obama administration nixed any further work on it. So we're back to square one.

Unlike the 600 coal-fired power plants in the U.S., which pay nothing to discharge their global-warming carbon dioxide waste into the atmosphere, the nation's 104 nuclear power plants have a huge problem disposing of waste. Now the NRC decision gives breathing space to an industry which has seen itself as under siege since the 1979 Three Mile Island accident. It also gives decision-makers a chance to reassess how best to maintain, or increase, the proportion of the nation's power -- currently 20 percent -- derived from nuclear fission.

A rational nuclear policy, in my opinion, would direct the bulk of available funds to improve the design of the "light-water" reactors which form the backbone of the U.S. nuclear power industry. According to a recent MIT report, there's no shortage of uranium for the foreseeable future, so light water uranium-fueled reactors are likely to be around for a long time -- perhaps a century or more -- until more efficient systems can be built. And as a co-author of the MIT report notes, "Today, we don't know whether spent nuclear fuel from light-water reactors is waste or a resource" -- that is, with ingenuity and luck, future generations will be able to use what we now term "waste" as fuel for advanced reactors.

So where to put that waste -- 2,000 metric tons per year nationwide -- in the interim? For now, the answer is on-site storage, such as the million-dollar concrete and steel dry casks now buried at the Humboldt Bay Power Plant.

Barry Evans (barryevans9@yahoo.com) believes that the best way to generate more power is to use less: Conservation should be priority No. 1.