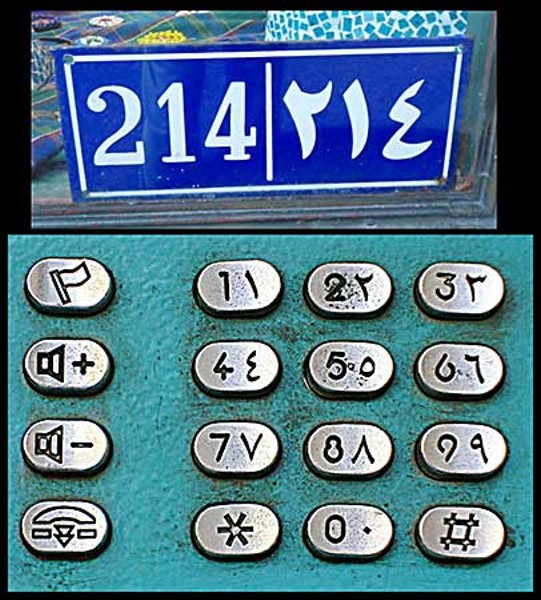 As for mankind, numbered are their days/Whatever they achieve is but wind.

Three different styles of writing numbers can be found within half a block of the gazebo in Old Town Eureka.

On F Street, Talisman Beads and Imports (in keeping with its international offerings) airs its street number both as 214 and ???. The latter symbols are usually (and confusingly) referred to as East Arabic numerals, but are called "Indian" numerals in the Arabic language. In full, they are, from zero to nine: ?,?,?,?,?,?,?,?,?,?. So what are our numerals called? Arabic! (I said it was confusing.) You can appreciate both the similarities and differences in the accompanying photo of an Egyptian public phone keypad.

After that, it gets trickier, for which you can blame the greatest mathematician of the Middle Ages, Leonardo of Pisa, aka Fibonacci (1170-1250), who introduced the number symbols we in the West use today. He did so much more, though. His book Liber Abaci (Book of Calculation) was seminal in converting Europe from the clumsy Roman numbers, with their complicated arithmetic, to the lean, clean, mean system we use today.

Compared with the Roman CCXIV, our "positional" decimal system of ??? or 214 (two hundreds plus one ten plus four ones) looks elegantly simple -- once you know how it's done. Thanks Fibonacci!

Barry Evans (barryevans9@yahoo.com) stopped counting the days of his life when he reached ?????. He lives in Old Town Eureka.