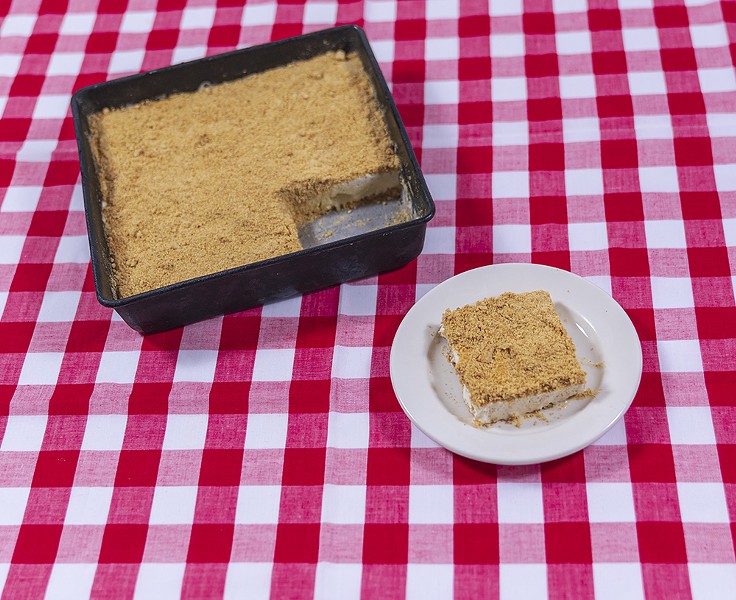 Courtesy of the Louisa Rogers Nuna herself, pearls and all.

My maternal grandmother 'Nuna,' otherwise known as Elinor Walker Flinn, was born in the Tennessee mountains but lived her adult life in Columbia, South Carolina. An upright, dignified woman, she embodied a word we don't use much anymore: lady.

She was married to Pappy, my colorful grandfather, a binge drinker with a wooden leg — a source of great entertainment to his grandchildren. He had lost his leg in Labrador during a hunting accident. Nuna was the quiet, steadfast understudy of the marriage, the dutiful mother, a professional seamstress who sewed her daughters' clothing during the Depression and kept the family alive when Pappy disappeared on drinking bouts.

It was Nuna who showed me that, although I have an outgoing personality, I'm often drawn to introverts. As my cousin says, "She was quiet and calm. I always felt safe with her."

I grew close to her during my teenage years, when most of my family was halfway around the world living in Pakistan, where my father had been posted on his latest State Department assignment. In 1967 and 1968, during my last two years of high school, I attended St. Mary's, a girls' Episcopal boarding school in Raleigh, North Carolina. Switching from the international school in Lahore, Pakistan, to a private academy in the insular, parochial South was the biggest culture shock of my life. Although my parents had been raised in South Carolina, our family had never lived in the South, and the first year, especially, I felt estranged from my roommates and the other girls. I remember a classmate asking me, "Where are you from?" She had a puzzled look on her face, probably because I neither appeared nor sounded Southern. "Well, my parents live in Pakistan right now," I said.

Anywhere outside the region between Alabama and Virginia was "the North." Hawaii, Arizona and Oregon were "the North." Years later, one of them would tell me that I, a caucasian girl, was her first example of "diversity" because of my Indian-style blouses and Bata sandals with toe rings.

On long weekends I escaped the Antebellum columns of the St. Mary's campus and took the Trailways bus to visit my grandmothers in South Carolina. At Nuna's, I would go to her bridge club, where she competed against other Life Masters, and to church with her, where she taught Bible studies. I didn't play bridge or care about church, but I felt relaxed and comfortable fitting into her routines.

Just as she had sewn my mother's clothes, she made me a beautiful dress out of a swath of batik I had bought overseas. She always kept a loaf of Roman Meal bread in her rollaway bread bin and I would sometimes have a piece in the afternoon, rolling the bread around in balls in my mouth and loving its soft squishiness.

Mealtimes were my favorite part of our days together. We'd eat at her dining room table under the watchful eye of the framed weaving: "Gentlemen are requested to spit in the spittoon and not on the floor." In 1968, I watched the African American hospital workers in Charleston striking on TV while eating Nuna's sticky fried chicken, green beans, rolls and homemade pound cake. The strikers and her fried chicken have forever been connected in my mind.

Yummy as her chicken and her pound cake were, all her offerings faded compared to her signature dish: frozen cheesecake. Decades later, my stepdaughters on the other side of the country said I should commandeer that cheesecake for a business. Sell it frozen on popsicle sticks, they said, and I'd make a million. Sadly, I didn't take their advice — a wasted entrepreneurial opportunity and the world's loss.

Unlike Nuna, I never became a seamstress, but — while our cooking styles could not be more different — I did inherit her love of cooking and pride in an honest homemade meal. And the one recipe of hers that I still prepare today is her frozen cheesecake.

In another bowl, whip the cream until it forms stiff peaks, then fold it gently into batter.

Grind the graham crackers or cookies in a blender until they are a sandy texture.

Line the bottom of a square or round 9-inch baking pan evenly with a little more than half of the crumbs. Pour the cream cheese mixture on top and smooth the top with a spatula. Cover the mixture with the remaining crumbs.

Place in the freezer for several hours until firm to the touch as ice cream. Serve and enjoy.

Louisa Rogers is a freelance writer based in Eureka and Guanajuato, Mexico, who loves to cook. She prefers she/her pronouns.