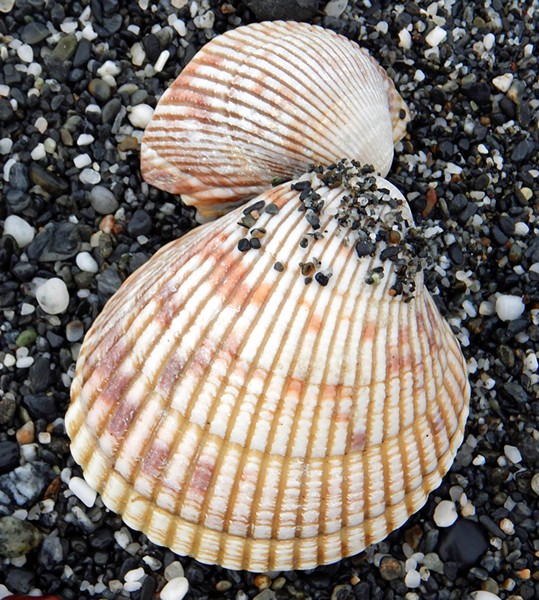 Photo by Mike Kelly The color pattern on a fresh Nuttall's cockle. 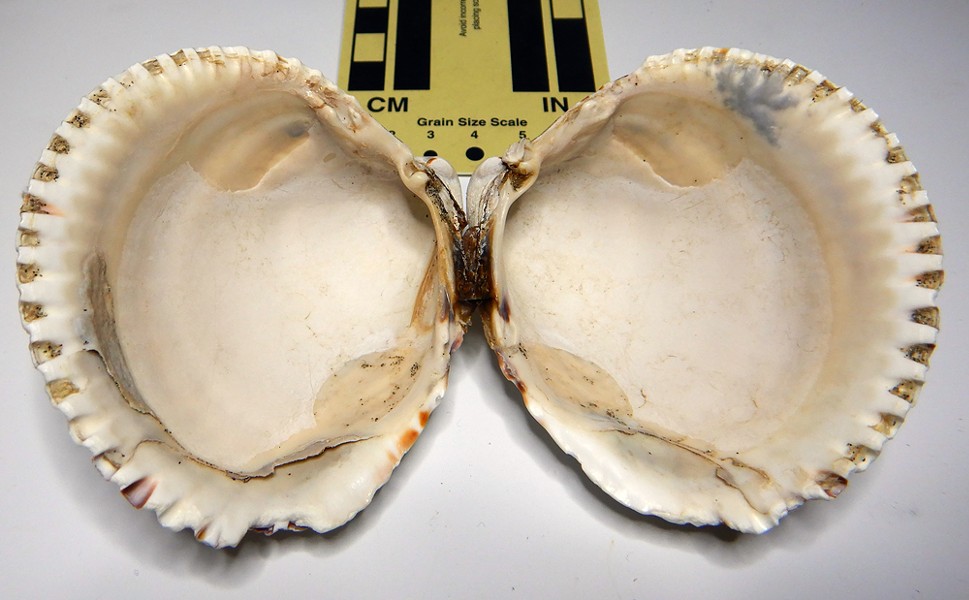 Photo by Mike Kelly Inside both valves of a still attached Nuttall's cockle.

Photo by Mike Kelly A large Nuttall's cockle valve and a baseball for comparison.

Photo by Mike Kelly The linked opening of a Nuttall's cockle.

Photo by Mike Kelly A Nuttall's cockle's siphons and mantle.

I have a shady-looking new neighbor. I'm pretty sure he slashed my tires — just because we like different sports teams. He's that kind. I'm sure he's also the one buying liquor and pornography for the neighborhood children and teaching them to steal my mail. He's scum and I told my friends that I'd kick his ass if I ever got him alone.

I'm on my regular morning beach walk. Few people arrive so early. But there's one car and it belongs to that criminal prick. He sees me and he's pointing menacingly at my baseball jersey. I'm looking for something to defend myself with but there's nothing but clam shells. I'm thinking maybe I can cut his throat with a razor clam ... . But he just drew a freaking sword!

So, I need to avoid close combat. And right now my only hope is this shell of a Nuttall's cockle (Clinocardium nuttallii). Hmm. It's much heavier than the razor clam shell. And these ridges along the edge could do serious facial damage if thrown at a charging lunatic.

This shell is actually one of two calcium carbonate "valves" that once housed the clam's flesh and fluids. The whole animal would have been heart-shaped and robust with significant heft. A large one can be baseball sized. Boy, wouldn't it be great if I had some live cockles to throw like saw-toothed baseballs at this scumbag's head?

I could run away, I suppose. But he's a skinny guy and he is closing in fast. If only I could outrun him like a Nuttall's cockle outruns its fierce predator, the sunflower star. The cockle escapes by thrusting out its muscular foot and leaping from the seafloor to bound away.

And I can't dig my way out of this like a clam might. However, neither can Nuttall's cockle, which buries itself just under the surface, if at all. Its siphon is understandably short compared to deeper-burying clams. Plus, its bulky profile would prevent digging fast like a razor clam.

But Nuttall's cockle doesn't need to dig. The armored shells link together strongly enough to stop, for example, a small shark trying to slice into its flesh — like this greasy bastard is about to do to me.

Oh, how I wish I were a Nuttall's cockle. I'd be living quietly in the fine sand within a Humboldt Bay eelgrass bed or in other calm marine waters to a maximum of about 650 feet. I'd be resting there, siphoning peacefully, filter feeding on plankton and occasionally releasing both sperm and eggs. Oooh yeah ... .

But there's no time for daydreaming with this degenerate's shadow looming. Which reminds me that Nuttall's cockle has tiny eyes on the ends of short tentacles that protrude from its gape. And these eyes tell the clam that a shadow is passing over, which may represent a threat, so the clam can close up just in time.

I'm winding up to throw the shell. But he says, "Dude! You're my neighbor with that awesome baseball jersey. I'm glad you're here. You won't believe this, but I found this pirate sword and there's a wooden chest in the sand. I can't dig it out alone and the tide is coming in. Come help me and we can share the treasure!"

We're running now, and I feel terrible for thinking of him as a dick and almost kicking his ass.

We've just stopped a half mile down the beach. But I don't see a treasure chest. He's facing me. And now he's chopping me to pieces with his sword while chanting, "BEAT LA! BEAT LA!"