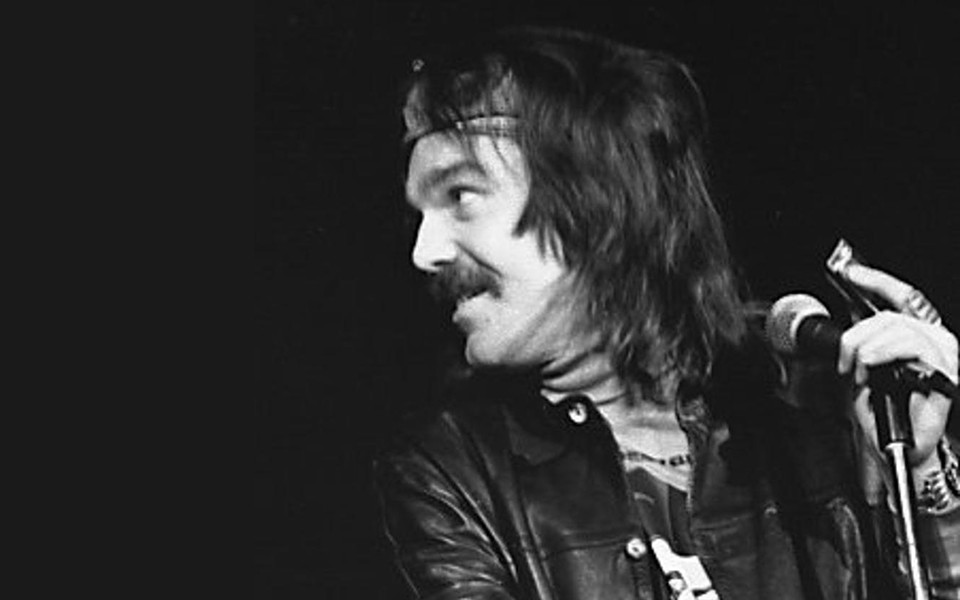 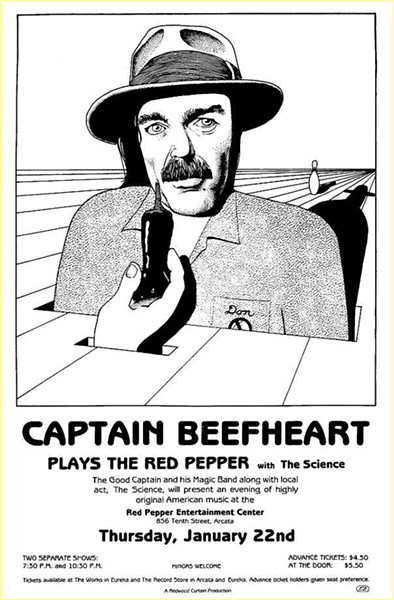 O Captain my Captain! our fearful trip is done,

The ship has weathered every rack, the prize we sought is won,

The port is near, the bells I hear, the people all exulting,

While follow eyes the steady keel, the vessel grim and daring;

O the bleeding drops of red,

Where on the deck my Captain lies,

Don Van Vliet, known to the world as Captain Beefheart, died in Mad River Community Hospital Friday after arriving there by ambulance from his ocean-bluff home in Trinidad, where he lived in seclusion for more than 20 years.

The Captain did not fear death, as he told Kristine McKenna, an interviewer for Spin magazine. "The future is random," he said. "I choose to think that because the alternative is too frightening. Then again, death isn't that frightening, although we're certainly taught to be afraid of it. Society does a real good job, doesn't it?"

Born and raised in Southern California, Van Vliet was a child art prodigy who started exploring blues and R&B in high school with Frank Zappa. The first Captain Beefheart and his Magic Band single came in 1964; it was a mostly straightforward cover of the blues tune "Diddy Wah Diddy" with the Captain wailing on harmonica. Over the years the Magic music got increasingly stranger. In 1969 he released the eccentric masterpiece Trout Mask Replica, a wildly experimental album rated by Rolling Stone as No. 58 on a list of the 500 Greatest Records of All Time.

The Captain continued making music, recording a dozen albums, the last in 1982. He then switched his focus to painting. At some point he relocated from the SoCal desert to a house in Trinidad. He saw his Humboldt home as "a painted birdcage above a hacksaw ocean with lovely redwood stalks with zillions of raindrops falling..." as he poetically put it in Some YoYo Stuff, a marvelous film by Anton Corbijn. (You can tell from his halting speech in the 1993 short that he was having trouble, presumably due to multiple sclerosis -- but his brilliance still shines.)

It's not easy to explain Beefheart's impact on modern music -- artists ranging from Tom Waits to Matt Groening cite him as a major influence, and now that he's passed, you'll find countless musicians pledging allegiance. Not that anyone sounds quite like him with his growling neo-Delta vocals and Dada lyrics, jangling, discordant guitars and seemingly erratic rhythms. The music can sound chaotic, but it was in fact intricately worked out and rehearsed endlessly with, by all reports, the Captain serving as a strict and often cruel taskmaster.

So what did he teach those who revere him? It might be as simple as demonstrating that genius requires ignoring all the rules -- in music and in art. In Beefheart's case the resulting brilliance was sometimes acerbic and disturbing, but he always left an impact. As he put it in a song on Trout Mask, "The old fart was smart."

I heard The Magic Band play a couple of times in Arcata, once at the Red Pepper (now Humboldt Brews) and again at HSU. I also met the Captain a couple of times in the late '80s when I was the chef at the airport restaurant in McKinleyville. Art Tripp, former Magic Band drummer turned chiropractor (and an ex-Mother of Invention), became a regular at the Silver Lining. He liked my cooking and would typically offer me a cognac as a tip. Art and his wife came in one night with Don, and Art introduced us briefly.

Sometime later Art and Don showed up again; Art was there to pick Don up after a flight to Europe where he'd attended an exhibition of his paintings. They lingered late after dinner and invited me to come sit with them when the other customers cleared out. Art ordered cognacs from the bar and the Captain pulled out some Cuban cigars. Smoking was not allowed in the restaurant, but I was not about to tell Capt. Beefheart what he could or could not do, so we all lit up and puffed and sipped and talked -- well, I mostly listened.

I wish I could recall more of that conversation. I mostly remember Beefheart's strong opinions. A new album by Prince was playing on the sound system -- Beefheart complained vehemently and I switched the tunes to some early Duke Ellington. "Now that's real music," the Captain announced. He told us about his arrival in London where none other than Boy George met him on the tarmac. "He gave me a big hug and told me, 'I love your music.' I pushed him away and told him, 'I hate your perfume,'" he said.

He'd sold a few paintings (for a lot of money) and felt the work was going well -- he was happy to be appreciated in an art world where few knew he was a former musician. And he was making far more painting than he ever did playing music.

As Art Tripp noted in a reminiscence posted on the Beefheart Radar Station blog, "Don was primarily a painter and sculptor. What he did in music was no different from what was represented by the images in his wonderful paintings. You could say that whenever Don was with other people, in most circumstances, they were participants in a painting. That was predominantly Don's view of life: as an art statement, with reality being a nuisance. Symbolism took precedence over substance."

And now the symbolist/primitive bluesman/painter is gone, escaped from his painted birdcage to fly free. All over the world people are pulling out old Trout Mask albums or hitting the torrents, listening to the crazy music and thinking, what the fuck? -- amazing.

Not much is stirring on the local music world, with many clubs closed for the post-Solstice holidaze. (Wasn't the eclipse cool?) There are a few exceptions:

The Jambalaya has an Xmas Eve Jam Friday with Pete Ciotti, B. Swizlo and some of the usual suspects getting funky and jazzy.

Of course, most casinos run 24/7/365: St. John leads an open mic night at Cher-Ae Heights Thursday and he and his Sinners play the blues at Bear River Xmas Eve; Taxi does their country rock thing there on Christmas.

Looking for some of those familiar holiday tunes? Guitarist Tristin Roberts and friends are gathering at Mosgo's Thursday evening for something called Jingle Bell Christmas. Tristin's friends include most of Huckleberry Flint: guitarists Dustin Taylor and Brian Pilger, Brian's wife Lauren singing (they all sing) and Ray Robinson on bass. The night's Little Drummer Boy is Will Startare, star of the Journal's Seven-Oh-Heaven, who I assure you is much nicer in person than he is in print. And the whole thing is for a really good cause: Proceeds go to support the work of Betty Chinn, Eureka's angel for the homeless and arguably Humboldt's "Best Person."

One holiday song they'll probably skip: the gritty blues from Captain Beefheart's The Spotlight Kid album, "There Ain't No Santa Claus On The Evenin' Stage." Darkness is falling "down in hominy's grotto; there's a soul die'n ‘n leavin' every second on the evenin' stage," which, needless to say is not bringing shiny gifts for the girls and boys. The Captain ends his song with a series of growling ho, ho, hos that take the pain away with blue bliss.

Hey, happy Xmas to all. Peace.