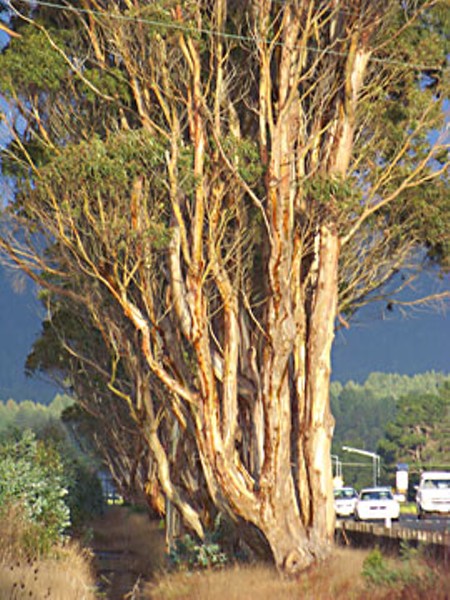 Eucalyptus trees on the Highway 101 corridor. Photo by Heidi Walters

Eucalyptus trees on the Highway 101 corridor. Photo by Heidi Walters

We pause now to interrogate a couple hundred of our longest-enduring residents. Experts tell us these old-timers are in the way. Creaky old limbs. Messy. And, besides, they're not really from around these parts, are they? Australia, actually. And, though they do smell rather nice and get lovelier with each passing year, the fact is many of those eucalyptus trees lining the 101 corridor between Eureka and Arcata are in the way of progress. Out with the old, you know.

So, Eucalyptus globulus, what's your purpose? Why should we keep you around? What good are you?

Well, of course, the trees can't answer. All they can do is rustle those long, silvery-green leaves, peel off a dappled shred of bark, drop some pungent nuts. Or, if they want to make the case for their own removal, they could chunk a limb down on somebody.

Instead, the interrogation turns to us, the other residents of the Humboldt Bay region. What do we think about Caltrans' proposal to cut about half of the eucalyptus on the Eureka-Arcata 101 corridor? The chop-down would be part of a bigger project, long in the works, to make the expressway safer by bringing it up to modern transportation standards, according to Caltrans. Caltrans is considering different scenarios for the stretch, from doing nothing to closing the six at-grade median crossings, long considered hazardous, adding strategic lanes and signals and either putting in turnaround points or an interchange at Indianola. Some of the alternatives would include construction of acceleration and deceleration lanes, including for the California Redwood Company's mill on the west side of the expressway so that slow-moving trucks coming in and out of the mill no longer clog the travel lane. Tree removal also would make space for the required 30-foot "clear recovery zone" -- room to careen in an accident, basically.

According to Caltrans' environmental impact report on the project, about 300 eucalyptus, of a total 600-some in the entire corridor row, would be removed. Some people, like history buff Ron Kuhnel of Eureka, say the count is too high -- that there are really only about 450 trees, which are multiple-trunked in some cases, and so only about 150 to 200 would be cut. Regardless, the visual effect would be the same -- roughly half the row gone.

Caltrans has been working on the corridor improvement project for eight years. In the fall of 2007, when Caltrans finished the draft EIR for it, the tree cutting proposal raised some ire. A coalition of groups, from Keep Eureka Beautiful to Green Wheels to the Northcoast Environmental Center, complained that the EIR lacked some key considerations -- like a separate bike path, for instance -- and that cutting the trees was a bad idea. But it wasn't until late 2008, when a Times-Standard story came out about the eucalyptus trees, that the real stink over them began, says Caltrans' Kim Floyd, project manager for the corridor improvement project.

"Since [that article], we have received quite a bit more comments on the eucalyptus trees than we ever did in the draft EIR circulation," Floyd said. "At the Dec. 3 public hearing [at the Wharfinger], we had close to triple the amount of people attend than were at previous public hearings."

In Caltrans' draft EIR, the historical assessment declares that the trees have no significant historical value and suggests that the trees probably were planted by the state highway commission (the precursor to Caltrans), or perhaps by a private landowner in cooperation with the commission. Lots of people were planting eucalyptus in those days as windbreaks and light barriers, and the state started a nursery program in 1920 to grow them and other trees.

The T-S story, however, placed the birth of the trees at a nursery in Eureka, and cited a 1925 Humboldt Standard article, announcing completion of the corridor, which notes that a local named Henry Devoy had planted them some years earlier without the highway commission's permission -- and that the commission almost cut them down. Instead, the trees were let stand because they were a good windbreak.

And that's not the only story about those trees' origin. "I've actually had a few people tell me their great-grandfather planted the trees," said Caltrans' Floyd. "But they were planted by the Division of Highways ... most likely between 1919-1925."

Trisha Lotus of Eureka, Devoy's great-granddaughter, disputes that. She said Devoy owned a lot of dairy ranches in Humboldt County, as well as a large swathe of redwoods in southern Humboldt -- some of which the family sold to the state to preserve, including what's now called Richardson Grove. Anyway, she said, just ask her Aunt Alice.

Alice Perry, 96, lives in the Bay Area, and as a child spent summers in Humboldt, running around on the ranches and in the redwoods and swimming in the Eel River. By phone last week, Perry recalled how her mom used to put her on the train -- her father was superintendent of the North Pacific Railroad at the time, and they got free passes -- and send her north to stay with her grandparents, Henry and Ella Devoy, in Eureka. She remembers the eucalyptus trees always being there by the bay.

"My grandfather owned three ranches along there -- they were dairy ranches -- and he planted those trees as a windbreak," she said. "My grandfather knew they were very fast growing, and very sturdy trees, and so that's why they planted them there."

But Perry doesn't wallow in nostalgia. While allowing that she has no real say in the matter -- she doesn't live in Humboldt, after all -- and that her niece probably won't be happy with her saying so, she says she can't get too excited about the trees' possible demise. Why, in her neck of the woods the trees are a fire menace.

"Listen, progress is everywhere and you have to live with it," Perry said. "Those trees served their purpose, they were beautiful, and I would say probably sometime they all have to go -- whether by freezing or otherwise. [In 1933, the year Devoy died, in fact, they froze and were chopped down; they sprouted back]. You have to be practical in this world or you're left behind."

She figures her grandpa Devoy, if he were around, would feel the same way. Besides, those trees aren't native like the redwoods.

"He would have said by all means, go ahead [and cut them]," she said. "He was one that moved constantly ahead, always. Save the best of everything and move forward."

Well, then, ask a biologist. Turns out, personally, local scientists seem to have feelings for the trees -- many like them. But scientifically speaking, they are indifferent.

"Generally, native-plant people look at the eucalyptus with a bit of a jaundiced eye," said Bill Condon, a senior environmental scientist with the state Department of Fish and Game's coastal conservation planning section in Eureka. "Eucalyptus is an invasive species and in some settings they can be a problem."

Here on the North Coast, however, they don't pose as much threat of spreading out of control like elsewhere in the state, he said. But they're not exactly bio-meccas, either. They offer some wind protection for birds in certain conditions, he said. And, raptors and waterfowl may use them as perches. But there are other places to perch.

"It's something that on a personal level we're concerned about, from an aesthetic standpoint, but in terms of biological value we couldn't find really strong compelling issues [with the tree cutting]," he said.

Dave Imper, a botanist with the U.S. Fish and Wildlife Service, said the eucalyptus trees are brittle and that the upper limbs get big enough to pose a liability risk. There's no love lost between them and botanists, he said.

"They're non-native, and in pure stands they're allelopathic -- they produce compounds which discourage other species from germinating beneath them," he said.

But the highway is already a disturbed landscape, he said, so it's hard to get too worked up about the eucalyptus. There are bigger plant problems to worry about -- like that non-native acacia gobbling up the countryside down near Fields Landing, or the continued loss of wetlands and species diversity here and everywhere.

"We're fighting battles all over the place to save what's left," he said.

So it comes down to aesthetics, and recent history. Michele McKeegan, of Keep Eureka Beautiful, says she's talked to probably a hundred people about those trees.

"And of all those hundred only one person said, ‘Oh, good, I'm glad those trees are going to be cut. Those branches fall down on the highway.' Otherwise, people said things like, ‘Oh, when I leave the county and then I drive back and I see those trees, I just breathe quieter.'"

McKeegan said even Caltrans' studies have shown that people slow down on average by four miles per hour when they get to the eucalyptus row.

Ron Kuhnel, secretary of the Eureka Heritage Society, said he doesn't buy the argument that the trees are dangerous.

"I have two eucalyptus trees on my property and they are huge," he said. "They've never lost a limb in the entire time I've been here. Yeah, they're a little dirty, they drop seeds. But I know a lot of avid cyclists who don't consider that a particular problem, who want them to stay because they slow cars down. And I think we can all agree that they are somewhat historic."

Kuhnel suggests that it might be cheaper just to buy the mill than build the acceleration/deceleration lanes for it. The overall corridor improvement project could end up costing as high as $62 million, a small portion of which would be for tree removal and native tree replanting to mitigate. Or, for that matter, he said, maybe it'll be a moot point someday if the mill closes because of the decline in the timber industry.

Kuhnel said he hopes Caltrans will choose an option it floated before the Board of Supervisors in September: narrow the median and keep the trees.

Floyd said Caltrans hasn't made a decision yet. There are many things to balance, she said: avoiding wetlands loss, not hurting merchants on the corridor, improving safety, and so on.

"That's one of our highest volume corridors in District 1," Floyd said. "It gets 40,000 vehicles a day. So, this needs to be worked out. We're looking to see what we can do, to see if there are ways to make adjustments to avoid removal of those trees."