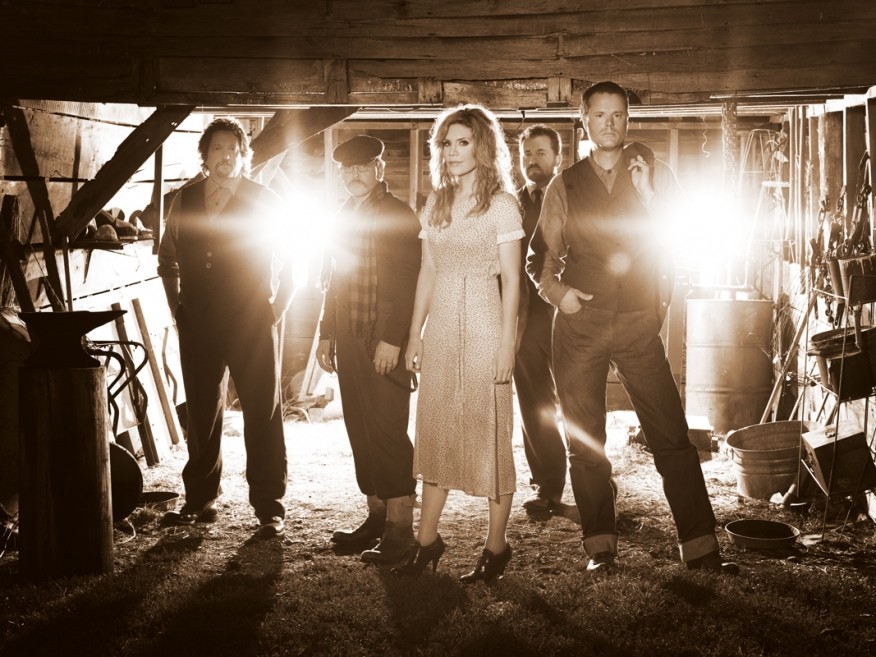 You hear a lot of old-time music from the American South today. It's hard to say why variations on early 20th century folk and country rooted in the Appalachians have surged in popularity over the years, but you can point to the soundtrack for the Joel and Ethan Coen film O Brother, Where Art Thou? as an important milestone at the turn of the millennium. When the brothers Coen hired T-Bone Burnett to assemble period music for a story set in the rural South during the Depression, he brought together the best traditional country musicians around and came up with a record that, to the surprise of many, won a Grammy as "Album of the Year" in 2001. At this point it's sold upwards of 7.7 million copies. An associated concert tour/CD/film by artists from that record, Down from the Mountain, added to the success and to the resurgent popularity of the old time sound.

Allison Krauss and her band Union Station were among the musicians whose careers got an O Brother bump. The soundtrack has Krauss singing on her own and alongside Gillian Welch and Emmylou Harris. Union Station guitarist/mandolinist/vocalist Dan Tyminski dubbed the singing parts for fictional Soggy Bottom Boy George Clooney on "Man of Constant Sorrow" and other songs. Every member of Union Station appeared on the record: ace dobro player Jerry Douglas (who has a strong career on his own), banjo/guitar picker Ron Block and bassist Barry Bales.

Not that that was the start of Krauss' career -- she was a contest-winning fiddler as a child and made her first record for Rounder while still a teenager. She won her first Grammy in 1991; she's been nominated for 41 and taken home 27, more than any living artist. Five years ago Raising Sand, her collaboration with ex-Zeppelin vocalist Robert Plant, won her six of those Grammys (again with Burnett producing). Her latest disc with Union Station, Paper Airplane, finds her returning to old time country roots with a somewhat modern sheen. Good stuff. Krauss and the boys are at the top of their game, which is why their CenterArts show at the Van Duzer is among the season's most expensive. Catch her if you can.

The post-genre alt. something music of Deerhoof is hard to describe. Wikipedia pigeonholes the quartet as "noise music," perhaps because the instruments are often distorted, making sounds unlike typical rock. (Isn't all music based on noise of some sort?) The band's latest album, Breakup Songs, covers familiar territory, relationships and the like, with Tokyo-born vocalist Satomi Matsuzaki singing to herky-jerky rhythms that somehow seem totally danceable. The local alt. crowd will be out in full force Sunday to see Deerhoof at the Depot with Brooklyn alt. duo Buke and Gase (aka Arone Dyer and Aron Sanchez) opening the show with some loopy music made without loop pedals.

The Works presents an evening of esoteric experimental music Saturday with Starving Weirdo Brian Pyle's solo sonic collage project Ensemble Economique, guitar/laptop looper Swimming, EDM by Astro Tarot and headlining, Maria Minerva, from Estonia via London, who has a new album, Will Happiness Find Me?, out on Not Not Fun Records. Maria creates cool, dreamy lo-fi dance tracks with a cut-and-paste method, layering effects and drenching her vocals in reverb. She explains cryptically in her personal blog, "Maria Minerva is myself as my own little sister, born out of need to do whatever. Maria Minerva has not heard that postmodernism is passé. Maria Minerva wishes she was born in the 1980s and born again in the 1990s. They call it lo-fi, I call it 21st century folk music."

The Trouble rocked our "Best Of" party -- hard -- this weekend. The band plays three times this weekend: Thursday at the Mad River Brewing Tap Room, and Friday and Saturday up at Cher-Ae Heights.

The Northwest has long been a hotbed for heaviness and it doesn't get much heavier than Mos Generator, a stoner rock trio out of Port Orchard, Wash. The band's upcoming release, Nomads, is due out later this month, but is currently available at live shows such as one coming up Saturday at Humboldt Brews. Humboldt heavies Lord Ellis open with a roar.

On the EDM front you have the massive overnight Bass Harvest party starting at noon Saturday at Dean Creek Resort near Redway. The line up is dominated by M.I.A. (Murda in America), a drum and bass collective out of Chicago, Danny the Wildchild, M1D1, Xile, MC Questionmark, DJ Oracle among them, but there are plenty of locals including Grasshoppa, DJ iWon (aka DJ Touch), Boss Levelz with Masta Shredda and Itchie Fingaz, Haiku and OnHell.

You might warm up Friday night at Nocturnum with some shamanistic sonic alchemy by Heavyweight Dub Champion, who bring a mystical mix of "deep revolutionary audio with support from a revolving crew of co-conspirators," this time including Resurrector, Sasha Rose, Noah King, Yuin Huzami and iNi.

On Tuesday, World Famous returns to the Arcata Theatre Lounge with Brooklyn EDM duo Break Science and Michal Menert, a Poland-born artist now based in Colorado, another from the Pretty Lights stable.

The next Whomp Whomp Wednesday at Nocturnum (Oct. 3) has Psymbionic from Austin, Futexture out of Asheville, NC, and Humboldt's own Psy Fi.

C-Baker hosts another über-eclectic "Something for Everyone" showcase Friday at the Jambalaya including hip hop by The Dirty Rats, reggae by Madi Simmons, Mykal Somer, Judrum and Elephant Dub Brigade Band and comedy by Humboldt's "Best Comedian" Sherae O'Shaughnessy.

Yo Mama's Big Fat Booty Band hits Humboldt Brews Thursday. The name pretty much nails the oeuvre of the Asheville, NC., crew who update Funkadelic, The Meters and Sly for what the Booty Band calls "nu funk."

The moon is full Saturday night and FuNky FULL Moon IV shines on Ocean Grove with DJ Knutz heading up a vinyl spinning team with most of the Missing Link crew: Mantease, Jaymorg, King Maxwell and Matt (sans Adam).

You get a totally different electronic hybrid from Delhi 2 Dublin, which plays at Humboldt Brews Wednesday, Oct. 3. As the name implies the Canadian band manages to fuse Celtic with Bollywood in a very danceable amalgam.

The SoCal duo Wahid combines Dimitris Mahlis' oud (a Middle Eastern lute) with Chris Wabich's hand percussion on meditative, organic improvisations that take you down long, dusty roads. The destination this time: a show at Arcata Playhouse on Tuesday.

Let's talk tributes. Retro-punk Luicidal, which plays Thursday at the Red Fox, has a name obliquely referencing Suicidal Tendencies, but this is not exactly a tribute. Louiche Mayorga and RJ Herrera played bass and drums in the seminal Venice punk band in the ‘80s, and Mayorga wrote many of the songs on S.T.'s first three albums, so he has a perfect right to sing them even if S.T. founder Mike Muir kicked him out of the band 25 years ago.

Real tributes? You have The Miracle Show doing the Dead at Humboldt Brews Friday and Wepeel reuniting to once again play Weezer tunes Saturday at the Alibi.

It's Marley time Wednesday Oct. 3, at the ATL with People Productions bringing in Bob's boy Stephen Marley and the Ghetto Youths to lay down the positive one-drop reggae. Selecta Prime, Dub Cowboy and Jsun fill in the gaps.

Not so positive: the turmoil surrounding the Capleton show at the Red Fox planned for mid-October. The club's owners and the promoter are standing fast as local gay activists lead a campaign to scuttle the gig due to the dancehall artist's "murder music" past. How it will play out remains to be seen. More on this as it develops.