Occupy: At the beginning 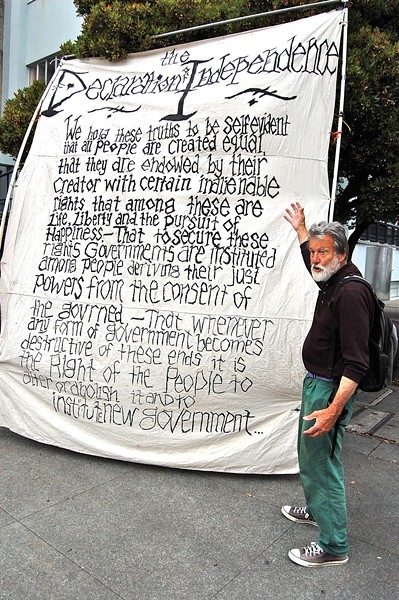 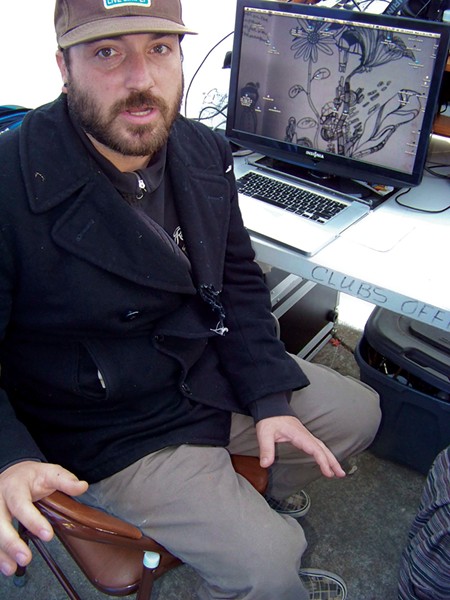 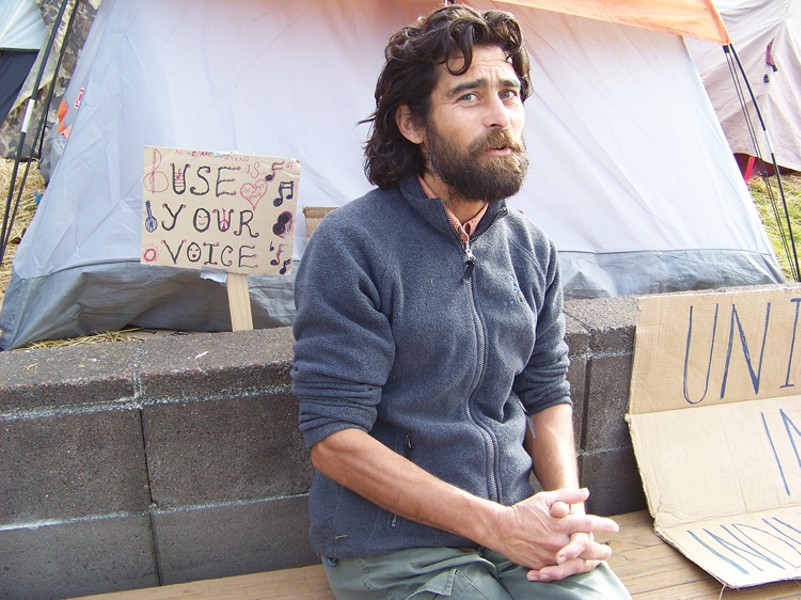 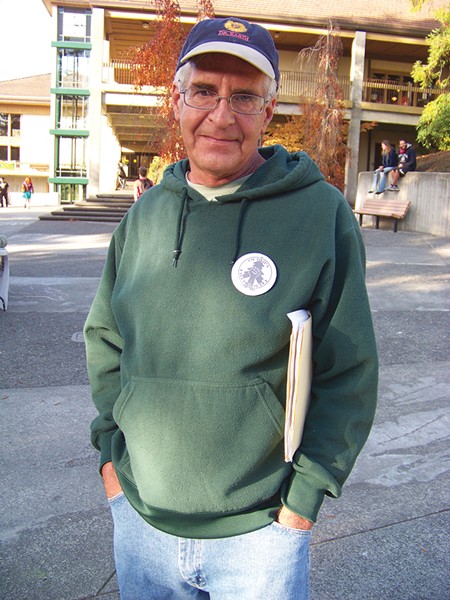 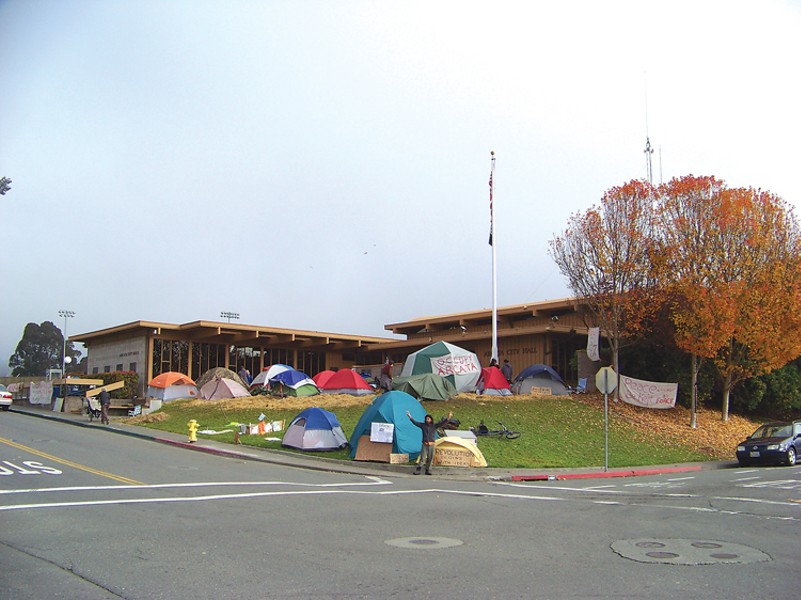 Photo by heidi Walters Occupy Arcata, the day before the Arcata police chief ordered it to remove the tents. 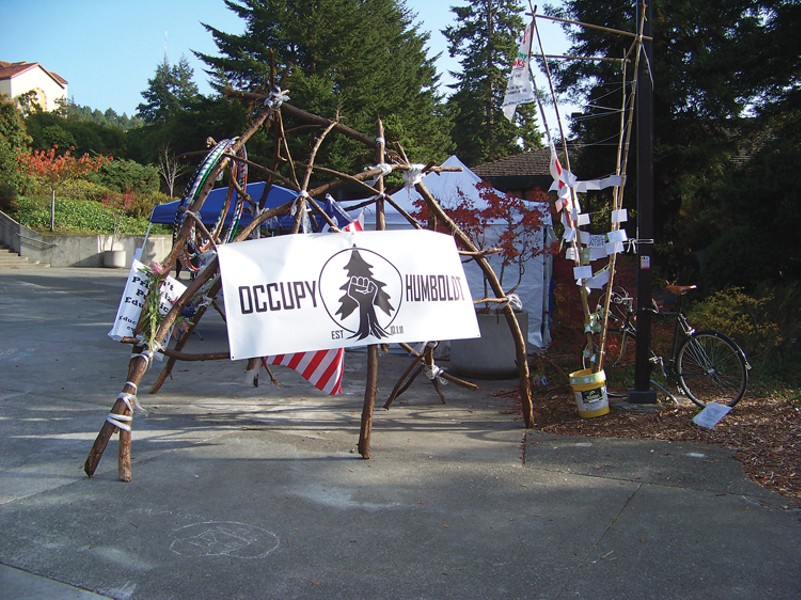 Photo by Heidi Walters On prayer flag-like poles, HSU students have penned their grief over the mounting costs of a university education. 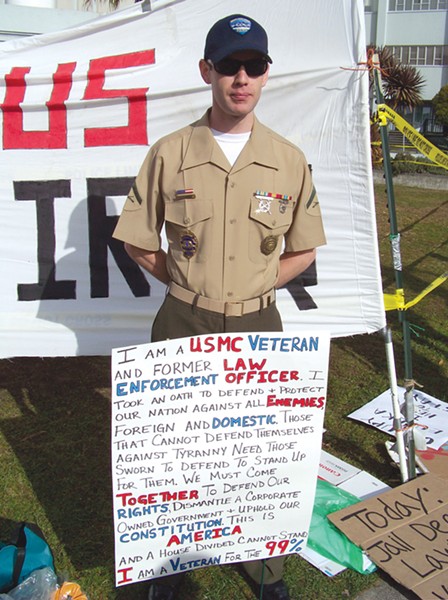 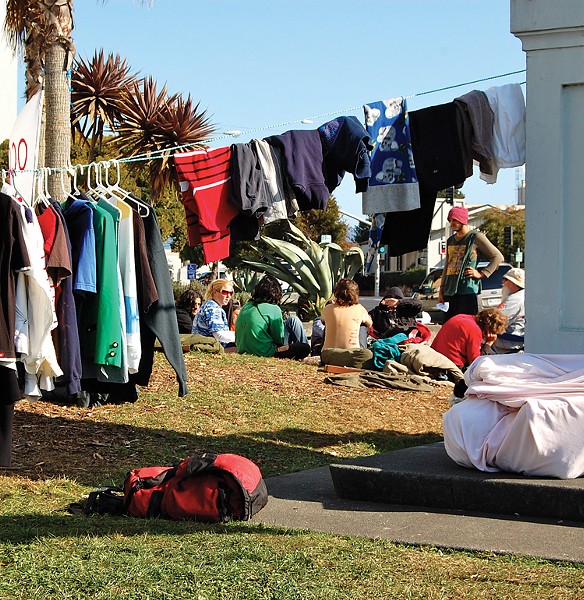 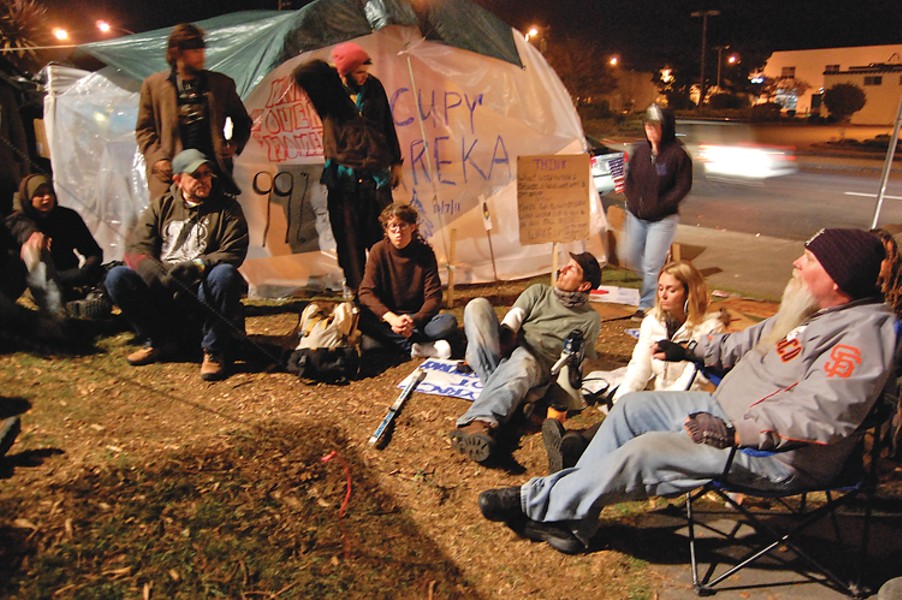 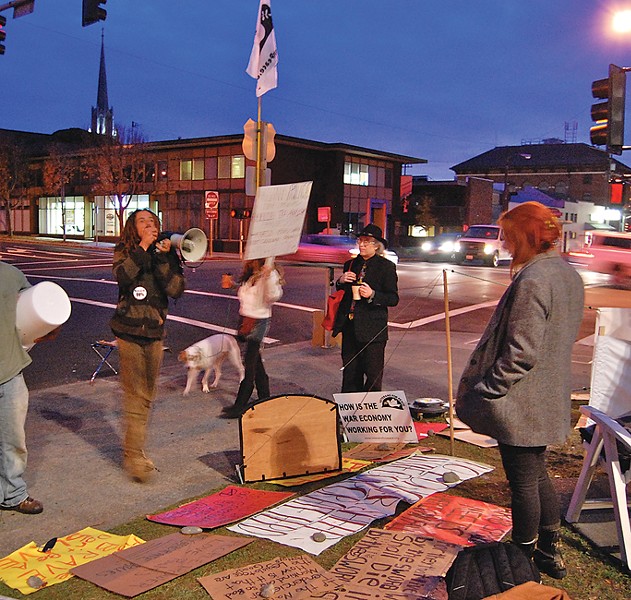 photo by Andrew Goff Preaching the occu-gospel via megaphone. 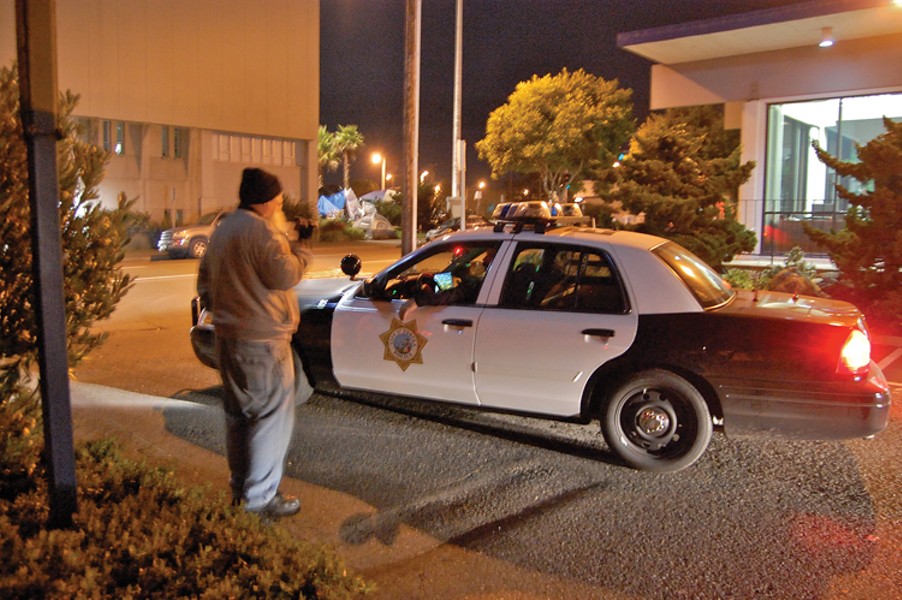 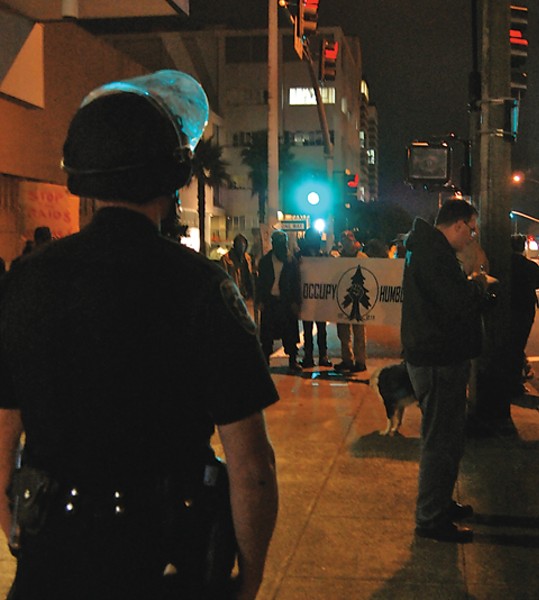 photo by Andrew Goff Occupiers and officers keep their distance from one another on Nov. 7. 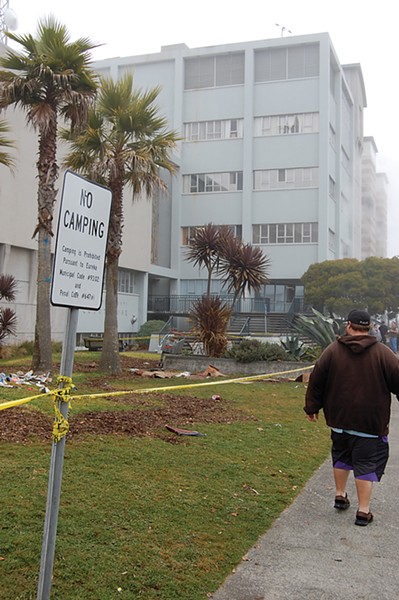 photo by Andrew Goff The aftermath of the early morning Nov. 7 raid. 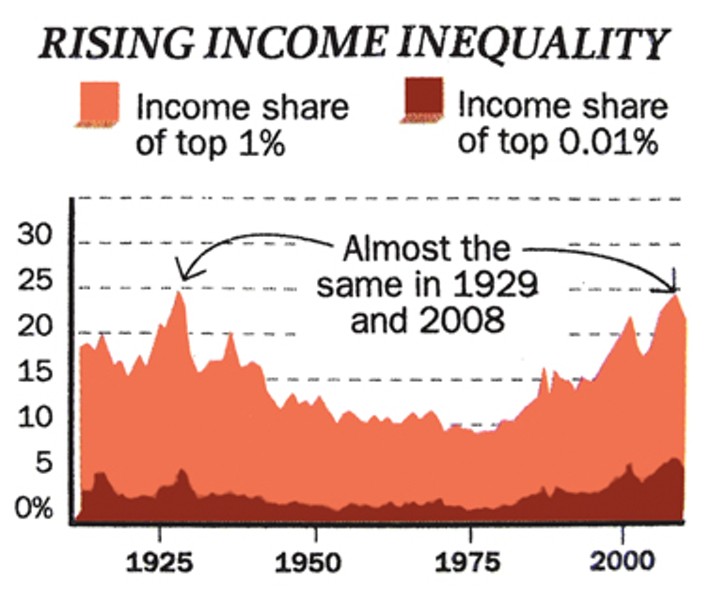 Courtesy of Time Magazine America was once the great middle-class society. Now we are divided between rich and poor with the greatest degree of inequality among high-income democracies. The top 1% of households take almost a quarter of all household income — a share not seen since

Thirteen days after the Occupy Wall Street movement erupted in New York City's Zuccotti Park, it came to Humboldt County. On Sept. 30, Arcata resident Trish Tillotson went down to the Arcata Plaza with signs she'd made from cardboard boxes scrounged from behind a furniture store. They said things like "separation of corporations and government," "love not hate" and "freedom is your responsibility."

Tillotson had been following what was going on in New York and was galvanized when she saw a YouTube video of a protester there getting pepper sprayed. She worried that people here didn't know what was going on, so she made her signs and put up an Occupy Arcata page on Facebook. She and a gathering horde of occupiers went to the plaza every day after that, protesting and cooking food for the hungry.

At the same time, Humboldt State University journalism student Travis Turner was plotting a similar debut. Turner, who writes and shoots for the Journal on occasion and is president of a media outfit called Venatore Media LLC, got fed up with the mainstream media's coverage -- or non-coverage, he says -- of Occupy Wall Street. So he put up a post on his own Facebook page urging people to join in solidarity with the Zuccotti Park protesters by meeting him on Oct. 1 in the grassy area at the top of B Street on campus. About 35 to 40 people showed up that first day, Turner made an official Facebook page, and Occupy Humboldt was born.

Occupy Eureka began seven days later, after Jack Nounnan sent an email from his "Communities For Justice and Peace" forum inviting people to go to the Humboldt County Courthouse on Oct. 8 between 11 a.m. and 2 p.m. to show solidarity with Occupy Wall Street. James Decker answered the call. "That first day, a lot of us talked about the Middle East, and Arab Spring, and how in places like Tunisia and Egypt the price of food had gone so high that working people couldn't feed their families -- and how, in the meantime, their governments quit subsidizing fuel and food," Decker said last Tuesday night after attending a Eureka City Council meeting. "And we thought, 'It's just like here.'"

Occupy encampments formed at the three protest sites, each with a small library and a kitchen, at times a pirate radio station commanded from a laptop, and daily "general assembly" meetings. Otherwise they developed completely different characters. A nurse set up a clinic at the courthouse camp. Occupy Humboldt staged protests at banks, organized an all-day teach-in and began plotting a spring Occupy caravan to Washington, D.C., that organizers hope will sweep up participants in cities along the way. In Arcata and Eureka's camps, fitful societies emerged whose multiple messages and complicated housekeeping issues often seemed to drown out the original message to get corporate money out of politics and make Richy pay more taxes.

In Eureka, protest signs included admonishments to stop war, end nuclear power and rid the town of bad cops. The camp has been raided and cleared out twice in the wee hours of morning by law enforcement - for illegal camping -- and several dozen were arrested. After each raid, protesters repopulated the site, or the sidewalk near it. Their message became more stridently about the right to camp as part of a peaceful assembly and protest. But many, including a number of lunch-break protesters who had jobs to return to, also still came to talk Wall Street and financial injustice. One afternoon a former Marine and ex-cop, Michael Corell, came to the protest with his wife. He's disabled, she quit her job to take care of him, they're broke with debt piling up, and they have three kids. Their struggle aside, Corell was provoked into coming to the Occupy protest when he heard that police had removed the camp a second time.

"As a police officer I took an oath to protect and serve, and I believe in it," Corell said. "People are being forcibly removed from public property ... for peaceably protesting. The cops are the sheepdogs, and they're biting the sheep."

Arcata's original camp, on the plaza, was ordered by Arcata Police Chief Tom Chapman to vacate, following multiple amicable conversations between the chief, the mayor and organizers. It was allowed to set up at Arcata City Hall, a couple blocks away. The plaza had become one big, loud, ugly party corrupted by the town's usual parade of late-night barflies and daytime layabouts -- a dysfunction that annoyed earnest occupiers and townsfolk alike. At the city hall camp, a large white sign went up pleading for a public bathroom -- a long-standing issue the city council had recently revived again -- and that issue seemed to steal the focus. Some protesters used the city hall bathrooms during the weekdays and nearby Safeway's bathrooms almost any time or day, or went en plein air.

The Arcata police patrolled the city hall camp routinely and adopted a patient wait-and-see attitude -- until last Wednesday, when Chief Chapman said they could keep protesting on the site, but they had to take the tents and kitchen down; he cited drugs, alcohol, harassment, urine-soaked grounds and other illegal activity. The next day the occupiers dismantled the camp. Organizer Lois Cordova said many now occupy her living room, where they're hatching a plan to start a group called Humboldt Village, a possibly online site for the non-monetary exchange of goods and services.

One recent morning before the chief's order to de-tent, in Occupy Arcata's designated "smokers' corner" -- a curb across the street awaft in tobacco and pot smoke and booze-breath -- kindly care-worn women mingled with ragtag discontents, and they talked of foreclosures and stalled job searches. In front of the cramped camp on the city hall's lawn, Rachel Smith, 21, and Kyle Brown, 20, sat on a low concrete wall taking in the weak winter sun and propping up a big cardboard sign: "Unity in Individuality." They're homeless. They just found out Smith is pregnant.

Brown moved here from Wisconsin three months ago and camped the first month in the redwoods. Was he here to protest Wall Street? "Not really," he said, looking shy. Once he got his ID, he said, he'd go look for a job.

Smith said she'd recently left an abusive relationship with another man. "I think we all have rights," she said. "I don't vote, I don't have a house or pay taxes, but I'm still human. Some of us just lose what we have all of a sudden -- one minute you're rich and everything, next minute you're homeless."

Tillotson wouldn't show up until later that day. On the phone, she said she no longer camps or cooks at Occupy Arcata -- too chaotic, she said, and besides she's had a falling out with some current occupiers. But she visits often and advocates for a bathroom. "I think homeless people, and people that have disabilities or are poor, are the first indicator of something wrong," she said by phone last week.

Later that same day, in Occupy Humboldt's tranquil, parklike setting on the HSU campus, a tinkle of piano and blare of trumpet leaked from the nearby music building. A structure made of thin wire stood out amid the small cluster of canopied shelters and tents. It was aflutter with small, prayer flag-like handwritten messages from students bemoaning student loan debt and overpaid administrators. The site was tidy and tucked away, unobtrusive. (As long as they adhered to campus guidelines, they were free to assemble and protest as long as they liked, HSU spokesman Paul Mann said in an email last week, adding: "Their self-policing is excellent -- they themselves enforce a 'no drugs, no alcohol' ban at their site ... and they urge everyone to refrain from vile language.")

Under one canopy, two occupiers sat at computer terminals. Nearby, community activist Kern Huerta was eager to talk. After losing his bellman job in La Jolla, he wound his way by highway and John Muir Trail to Humboldt six weeks ago, drawn here by the forest. He spent his first night under the 11th Street bridge over the freeway. Samba music woke him up, and he saw dancers and drummers snaking by overhead.

"I thought, 'This is what this town is like?'" he said, smiling. The Samba dancers were with the Occupy Humboldt group, marching into town to occupy the plaza. Huerta joined them, and he's been with Occupy Humboldt ever since. He wants a job, he said; he'll dig holes, anything. He might go to college. For now, though, he's fully immersed in the movement -- which he barely knew about until he set foot in Humboldt.

"I've been waiting for this moment my whole life," he said.

Activist Jim Paquin arrived with a litany of Wall Street crimes, of statistics on poverty and the  uninsured and the income gap. A Vietnam veteran surviving all right on his social security, he said compassion drives him to immerse in the Occupy movement -- which he doesn't think ever will really end.

"This is a lifetime commitment," he said. "Right now we're a little baby movement."

Turner, one of the first to bring "Occupy Wall Street" to Humboldt, arrived at the computer tent and sat down. He said Occupy Humboldt isn't what he thought it would be -- a local force of solidarity shining a light on the movement he thought the regular media was ignoring.

"It's so much more," he said. "More people are talking at General Assembly now who never used to say anything. Now, I'm hoping that nationally this really changes something."