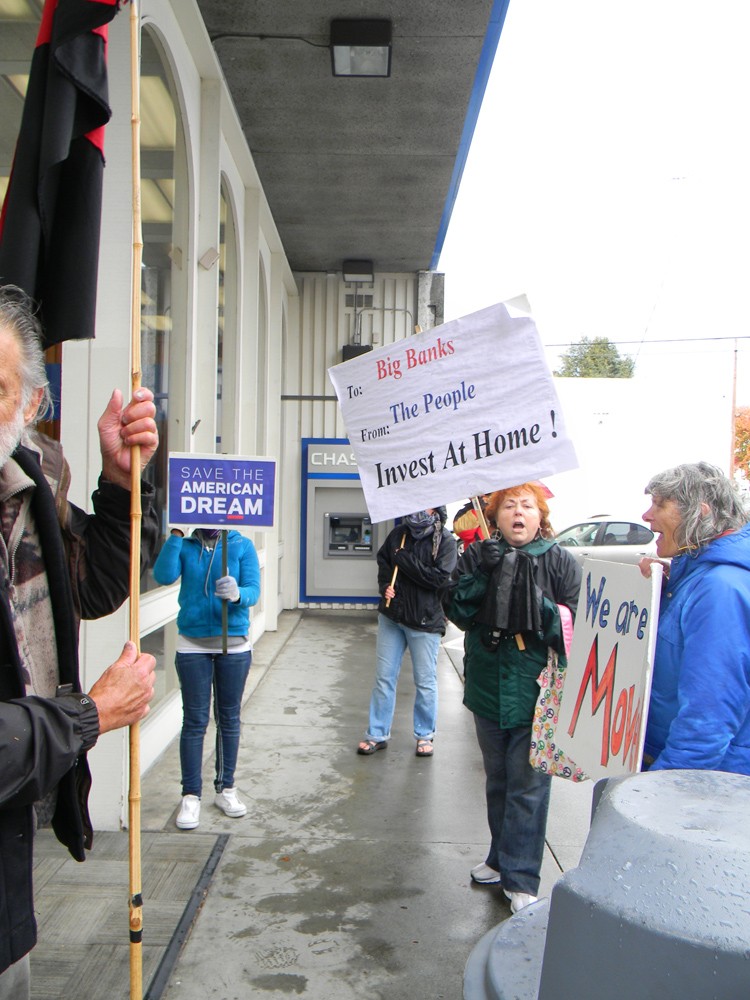 At first blush, last Saturday's Bank Transfer Day seemed like a great idea -- a beautifully simple way for consumers to take revenge (finally!) on our nation's sinister and impersonal mega-banks, the financial behemoths whose predatory lending and sleight-of-hand derivatives effectively turned our economy into the largest pyramid scheme ever devised. And when it crumbled, we bailed them out with our tax dollars.

Bank Transfer Day, the brainchild of a Los Angeles art dealer, imagined an army of righteous bank customers coming together to holler in unison: "I'm taking my business elsewhere!" The idea was to close your accounts with big banks and transfer the money to a local credit union or community bank.

Lots of folks have done so. Since Sept. 29, when Bank of America announced its now-aborted plan to charge a $5 monthly debit card fee, some 650,000 people have joined credit unions, depositing more than $4.5 billion into new savings accounts, according to a press release from the Credit Union National Association. And the numbers have no doubt grown since the release was issued last Thursday, three days before Bank Transfer Day proper.

Local Chase branches braced for disgruntled customers and rowdy protesters, hiring extra security guards. A teller commented to one Arcata customer that they'd lock down the building if necessary. But the mobs failed to materialize.

Saturday around noon, security guard Lee Lawson stood inside the glass door on the back side of the Jacoby Storehouse, sipping coffee and looking out through the rain at people using the ATM. "It's quiet," he said. And it had been all morning.

At Wells Fargo in Arcata, customers filed in and out peacefully. Meghann Thomas, an HSU sophomore from Palm Springs, said she had no intention of closing her account. She doesn't want to pay big ATM fees when she leaves town. "I live so far away from where I go to college, I need one of those national banks," she said.

Over in Eureka at the Bank of America on Fourth Street, Caterina Lewis-Perry of Eureka was doing some banking at the ATM. "I'm a huge local activist," she said. She and and her partner donate food from their garden to the food bank, and they always take reusable shopping bags to the store. But she's not switching banks, either, because she worries about ATM fees when she travels. As a fisheries technician, she travels a lot for work. And half her family lives in Jamaica. "I want to support Umpqua," she said. "I want to support Redwood Capital. But I feel like they can't support me."

Up the street at Chase, a small but steady flow of customers moved through the teller line while, outside, a dozen or more sign-wielding protesters chanted, "Move your money! Move your money!" The security guard locked the door, allowing customers in one at a time. There was a brief discussion among employees about whether or not the police had been called. But soon the protesters moved on.

On a local level, Bank Transfer Day appeared to be a bust, which, curiously, might be for the best if you're looking to stick it to mega-banks. Over the past week, a number of analysts have concluded that moving your money out of big banks would likely have the opposite of the intended effect: It could save the banks money.

Here's why: If your checking account balance is less than $25,000, your bank probably isn't making any money from you. According to Bill Israel, a finance consultant quoted in The New Republic, the average checking account costs banks around $200 a year to maintain, what with all the servicing, statements and teller salaries involved. Banks used to make that money back (and then some) through overdraft fees and debit card swipe charges. But recent government regulations staunched those revenue streams.

"The fact is ... big banks won't shed many tears if those customers go off to a credit union," Felix Salmon of Reuters wrote last week.

So if you didn't get around to closing your account with Bank of America, Chase or Wells Fargo, don't sweat it. You might be better off bleeding the beast from the inside.