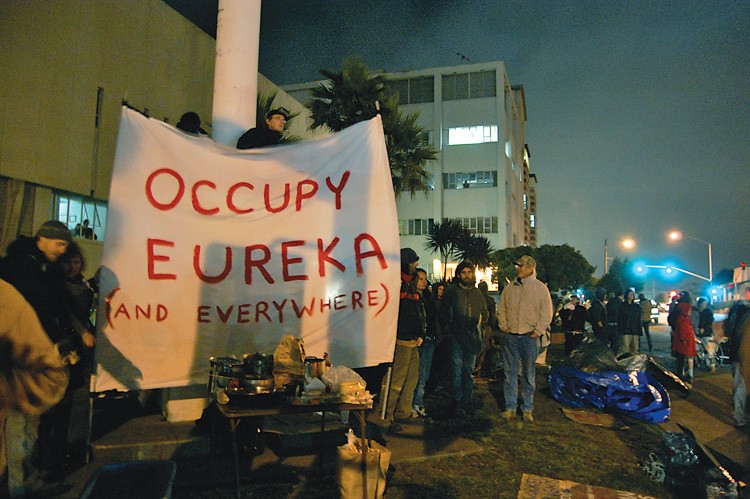 The international Occupy movement, the Arab Spring-inspired, Adbusters-organized campout to raise awareness of big businesses' role in the undeniable increase in global economic inequality, would undoubtedly be on any year-end list of the world’s top 10 stories -- likely at the top.

The official birthday for the Occupy movement will forevermore be commemorated on Sept. 17, when Occupy Wall Street first set up shop in lower Manhattan’s Zuccotti Park. Since then, the “Occupy Together” Meetup page lists more than 2,500 protest communities that have shot up on six continents.

Of course, Humboldt wanted in. On Sept. 30, less than two weeks after OWS landed on New York, Occupy grew its first face here in Humboldt when Arcata resident Trish Tillotson and cohorts deemed the Arcata Plaza ripe for occupyin’. Now, we’ve been graced by not one but three local occu-factions, with Occupy Humboldt staking out HSU and Occupy Eureka holding down the Humboldt County Courthouse. Occupation complete.

As with the entire Occupy movement, clashes with law enforcement have become a major theme, with the pissing match between Occupy Eureka and city and county officers being the most constant example. You put up tents, we’ll take ‘em down. You put up a fence, we’ll hang signs on it. Well, you’re all under arrest. Happy? Yes, actually.

And as with the larger movement, the question most tussled over seems to be what effect, if any, Occupy is having on the issues it highlights. The query seems even more appropriate when applied to the ragtag groups that have been exhausting themselves in our small, rural, geographically isolated region for over two months now. Are they doing any good?

Maybe. Maybe not. We are still talking about them ...