Well, it looks like the salmon season on the North Coast has a pulse after all. After the first three weeks of the season produced very little, especially out of Eureka, salmon are finally starting to show up. The hot spot has been right out front of Trinidad. "It's been like this off and on all season," said Tony Sepulveda of Shellback Sport Fishing. "I've had a handful of days where we've done a fish a rod or better." After long stretches of unfishable weather and the salmon nowhere to be found, the Eureka fleet joined the Trinidad party over the weekend. The fishing was good, with some boats getting limits and others close to it. Most of the boats were working the 03 to 06 lines in 180 to 220 feet of water. There have been plenty of shakers to keep you on your toes as well as plenty of coho. With only 12 days left in the season, it's good to see some smiles at the dock. It's been a tough year but it looks like it may well end on a high note. For more information on the ocean sport salmon season, visit www.wildlife.ca.gov/Fishing/Ocean/Regulations/Salmon. 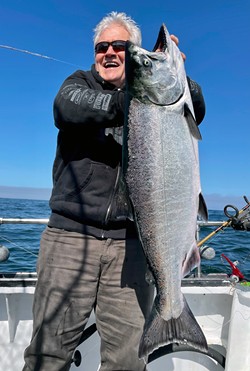 The California Department of Fish and Wildlife issued a press release Monday asking recreational anglers to voluntarily change how, when and where they fish to minimize stress and mortality among fish populations suffering from drought conditions. CDFW is advising anglers not to fish past noon on certain inland waters as even catch-and-release angling during the hottest parts of the day can greatly increase fish stress and mortality.

Coldwater species such as trout, salmon and steelhead have the greatest likelihood of being affected by the drought this year, but low water levels and high-water temperatures can potentially affect all inland aquatic species. CDFW has introduced a series of voluntary angling recommendations – so-called "Hoot Owl" Restrictions — that directs anglers to focus their fishing during the cooler "hoot owl" periods of the day when water temperatures are lowest. A watchlist of specific waters anglers should avoid fishing past noon is included and will be updated as conditions change. Sustained afternoon water temperatures exceeding 67 degrees for trout fisheries could trigger addition to the list.

As conditions change, CDFW will post the updated list on the "Hoot Owl" Restrictions page. For more information, visit www.wildlife.ca.gov/Fishing/Inland/Hoot-Owl.

With few signs of salmon, the Eureka fleet has moved its efforts north to Trinidad, where a decent bite has been going on for a couple weeks. Tim Klassen of Reel Steel Sport Fishing made the run north the past few days and reported a pretty good bite. "There's lots of shakers around and keepers up to 20 pounds," said Klassen. "We boated seven on Sunday and Monday, with fish to 14 pounds fishing in 200 feet of water. Most of the fish are coming at 70 feet and shallower."

"We're seeing a pretty good salmon bite right out front of Trinidad now," said Curt Wilson of Wind Rose Charters. "Most of the fish are in 200 to 250 feet of water from Trinidad Head to Cone Rock," said Wilson. Some of the boats are reporting limits but most days are more than a fish a rod. I wouldn't call it limit-style fishing yet. The rockfish bite remains steady, with limits of blacks coming easily between the Head and Patrick's Point.

The rockfish bite has been great all week, reports Jake Mitchell of Sea Hawk Sport Fishing. "Most of the boats were getting quick limits," said Mitchell. "The lingcod bite picked up this week as well with limits on most days. The salmon bite showed signs of life again starting Thursday and peaking on Friday. It slowed to about a fish per rod over the weekend for those fishing the Old Man."

The salmon are spread out but some are being caught each day, according to Britt Carson of Crescent City's Englund Marine. "The best bite has been between Round Rock and the green can in 100 feet of water," said Carson. "The guys putting in the time are getting limits while others aren't doing as well. There's been lots of zeros. The rockfish and lingcod bite continues to be excellent when the boats can get out. The California halibut bite has been slow due to the wind and lack of effort. Clamming was good on the last round of minus tides, with lots of limits reported. The clams continue to be on the small side."

"Rough weather made for poor salmon catches the past week out of Brookings, although charter boats had a few good days," said Andy Martin of Brookings Fishing Charters. "Warmer water has stalled the action close to the harbor, while choppy seas have prevented most boats from getting offshore, where commercial boats have been faring better. Fishing is good for rockfish and fair for lingcod. No reports yet of tuna out of Brookings, but boats further up the coast have had some success."

The salmon bite has slowed in the estuary. Only a handful of fish were caught each day over the weekend. There were quite a few rolling but the bite never turned on. Anchovies rigged with a spinner blade has been the top producer so far. Best fishing has been on the incoming and a couple hours after the high tide.

The Rogue Bay has been hit and miss for salmon, with some very good days mixed in, according to Martin. "The kings are spread throughout the bay. Windy weather has kept many boats away from the jetties, concentrating effort near Jots Resort and Indian Creek. Straight baits without blades worked best last week," added Martin.