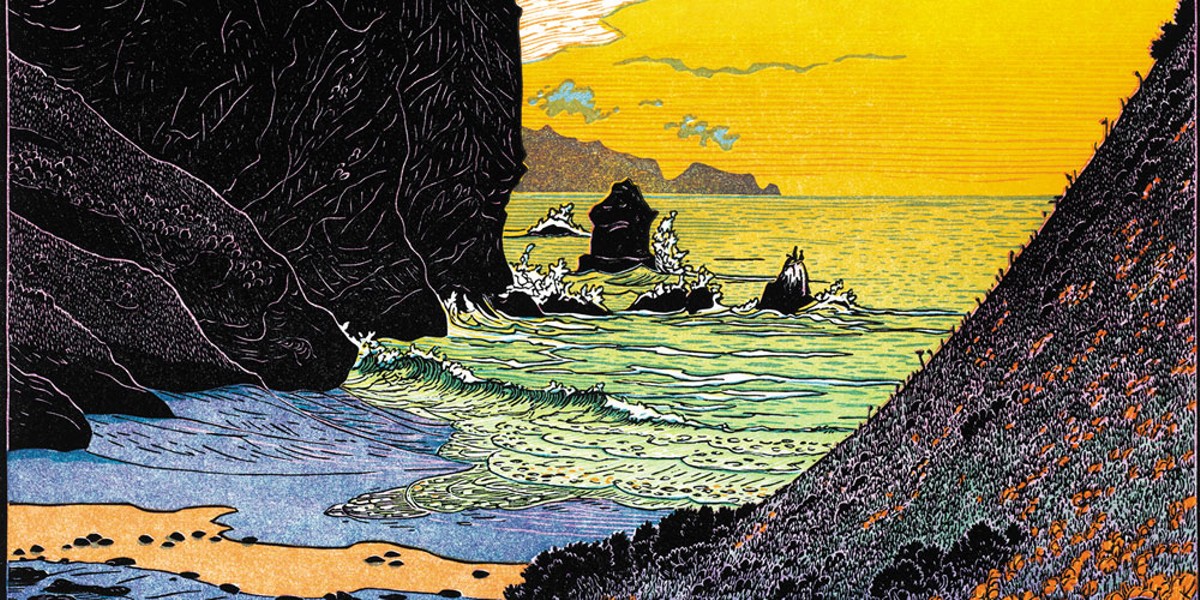 Courtesy of the artist A spring sun sets over "Tennessee Cove, Marin Headlands" by Tom Killion.

In McWay Rocks Big Sur (2013), we view the scene from on high — lean in and a twinge of vertigo might seize you. The diagonally oriented composition yields a striking contrast. The looming headland, with its cloud-like formations of low shrubbery rendered in a wiggly violet line, is balanced by its paired expanse of saturated blue. In the areas where the pictured ocean deepens from turquoise to ultramarine, Tom Killion's pigments possess the same effect of intensity that the scene might believably possess in real life. Here, as in other prints by the artist, an impression of great detail is created, even though the line is actually more economical and reductive than you might at first suppose.

Humboldt State University's Reese Bullen Gallery hosts multi-color woodcut prints of California's coastal landscapes by Tom Killion this month. Killion, born and raised "on the slopes of Mt. Tamalpais" in Marin County, is a fixture in the Bay Area printmaking scene: author of many illustrated books, founder of Quail Press and chronicler of the Northern California coast, he has been making landscape prints in the Japanese manner since the 1970s. This traveling exhibition collects many of the images from his latest book titled, like the show, California's Wild Edge: The Coast in Prints, Poetry, and History, which came out with Berkeley's Heyday Press last year.

Killion has stated that the images he makes all begin in direct observation, with sketches made in plein air — he is not interested in working from photos. At the same time, he is no literalist. The images he makes accommodate a dimension of subjectivity, even idiosyncrasy. There's a wiggly, tensile quality to the line that suggests every aspect of these scenes is interconnected and alive.

Captions record the year and sometimes the season in which the pictures were made, along with a few words about the places they represent. "Hardy Creek on the Mendo Coast north of Westport is where Hwy. 1 turns inland and the rocks form the 'southern gate' of the fabled Lost Coast," one reads. The exhibition wall text also includes information about process and edition size, at a scholarly level of detail that will be appreciated by woodblock aficionados.

Woodcut is among the oldest printmaking processes, with a long history of use in East Asian and Western contexts. The Japanese ukiyo-e or "floating world" artists Katsushika Hokusai and Utagawa Hiroshige are among the masters of the genre; Killion's work has been strongly influenced by their landscapes but it's clear he's spent a lot of time looking at European and American wood engravers as well, especially the work of Eric Gill and Rockwell Kent.

Woodcut technique involves carving into a block of wood or linoleum and chiseling away the negative space around each image to be inked. For each color, a different plate must be created and the paper must be rolled through the printing press separately. Precision is part of the process. Killion's prints are technically accomplished, sometimes involving as many as a dozen colors. Killion has stated that he "carves his images into cherry, all shina plywood, Amsterdam linoleum and other block materials using Japanese handtools." He prints on handmade Japanese kozo paper, using oil-based inks and a German hand-cranked proofing press.

In the Reese Bullen Gallery, director Michele McCall-Wallace took the exhibition option of arranging prints according to the locations they depict, which makes for fun viewing. The sequence runs down the coast from north to south, starting just north of Cape Mendocino. (Humboldt residents can only hope that a future project will lead Killion to venture out to the real Northern California so he can record our beauty spots.) It's positioned to the immediate right as viewers enter. If you follow the sequence as it bends around the gallery, the familiar act of circumnavigation becomes a loose synecdoche for the experience of driving down the coast.

As we move through the gallery, from Point Reyes to Big Sur to Morro Bay to San Pedro, the prints could be postcard views from a surfer's solo pilgrimage. Killion returns to spots at intervals of years and even decades. The logic of the hang dictates that these efforts be grouped together, which provides an opportunity to appreciate the ways in which the artist's style has elaborated over the past 30 years.

Killion belongs to a cohort of ecologically minded Northern California artists who celebrate wilderness in painting, prints and poetry, so California's Wild Edge boasts a large cast of distinguished collaborators and kindred spirits. Like the book it is based on, the exhibition pairs his prints with their words. Wall text includes poems and passages by Gary Snyder, Jane Hirschfield, Jim Dodge and Jerry Martien, as well as older excerpts by authors like Richard Henry Dana. Stop and read on your journey around the gallery.

A public event to celebrate California's Wild Edge will take place in the HSU Library's second-floor Authors' Hall on Thursday, Sept. 22 at 5:30 p.m. Tom Killion will give an artist's talk and Jerry Martien and Jim Dodge will read their poetry. A reception in the Reese Bullen Gallery will follow. The gallery is located in the HSU Art Department Building at the intersection of B and Laurel streets. Gallery hours are Monday, Tuesday, Wednesday and Friday noon-5 p.m., Thursday noon-7 p.m., and Saturday 10 a.m.-2 p.m.