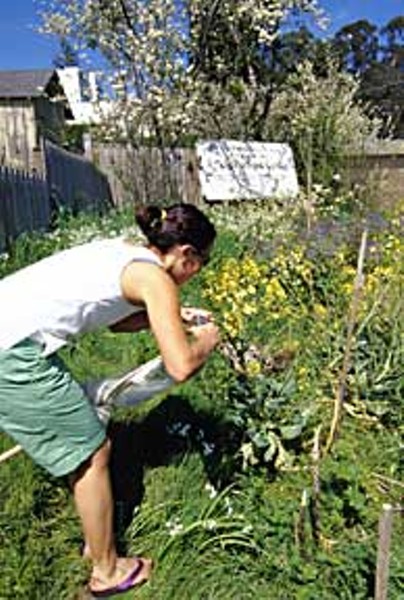 Springtime in Humboldt County has to be my favorite season. Some will argue summer is best. I'll admit that it is hard to beat jumping into a turquoise pool on the un-dammed and naturally warm South Fork of the Trinity River while steelhead swim past, but as inland temps soar the companion coastal fog gets to me. Fall is claimed by many as their favorite, with the amazing color shifts and the crisp bite to the air that gets the lungs opened up after weeks of lazy heat. If winter is your season then you should probably seek professional help (the one exception might be if you are a bird-nerd as the bird populations apparently peak then, but there again.

My dictionary defines doldrums as: a state of inactivity or stagnation. This certainly does not apply to springtime on the North Coast. My wife, the biologist, keeps going on about fornicating bunnies and often interrupts me with, "Oooh, look at the pollinator, he's so sexy!" A carryover of a more liberal science education at HSU I suspect. One thing I cannot claim to have seen this spring is the bunnies, fornicating or otherwise, but the pollinators are in full-on fiesta mode when the late morning sun is out. I get a bit edgy thinking about Killer Bee attacks (inanely, of course) when I hear the heavy drone from the flowering trees and shrubs, severely overburdened with petal and pollen this prolific spring.

A mid-April day at Patrick's Point like the one detailed below is typical.

While attempting to climb the seasonally slimy stone, we were treated to misty rain that cooled things off around noon. By 4 p.m. the sun was beating down unabated - a scorching 65 degrees, not a cloud in sight. Wind would rage through and whip our hair straight up. The sea foamed white to nearly a mile out while 20-foot wave surges ravaged the sea stacks, exploding 100 feet skyward. Then by early evening the clouds flooded in again, bleeding the sky and land of the intense color of just moments before. At night, as planets rose visibly on the line of the ecliptic, the gapped clouds swirled and large raindrops pelted us.

Trilliums begin popping along roadsides (is it really eight years growing 'til they can flower?). The invasive but attractive mustard goes supernova. Thousands of tiny, vibrantly green leaves begin popping out of the deciduous trees, starting as a whisper and over the ensuing weeks becoming a deafening roar of color and new life. As I get older, and learn to recognize and anticipate seasonal shifts to a finer degree, time appears to speed up, and like time-lapse photography my mind can better perceive the beauty of change and cycles of seasons. They become more tangible. When the sun burns overhead through a latticed dome of foliage, leaves backlit providing dozens of crazy shades of green, I can marvel anew at the subtle and magnificent architecture of the infinite continuities of impermanence.

In springtime Humboldt's population becomes even more transitory than in summer, when all the university students leave. Whales cruise through, heading on to Alaska. Maybe the days I have been coastal were too rough for them, because I have yet to spot any this year. Flights in and out increase - the avian kind. Jherime Kellermann - a dyed-in-the-wool-bird-nerd, his business card offers his expertise as Avian Ecology and Research - assures me this is true. Godwits, of festival fame, sanderlings, and whimbrels head back north to the Arctic to breed. Aleutian geese (also of festival fame) with Western tanagers wing their way through while Wilson's warblers and lazuli buntings are just arriving.

Springtime means I get to wear my entire wardrobe, though usually not all at once. It is often warm and dry enough for shorts and short-sleeved shirts, and my anemic-looking legs and arms are ravenous for some vitamin D. Springtime also means that I usually have a spare rain jacket and windbreaker that lives in my car or backpack because the weather is more moody than the throes of menopause (this is of course speculation, but I suspect I am not far off - on the menopause part).

Another great part about springtime is tax time - getting them prepared, sent off and done with. It is a kind of spring-cleaning. The work of the year before is officially put to rest - a time when winter and shorter days are fading into memory and slowly being replaced by longer snippets of warmer sunshine. The compost pile balloons up from cleaning out the fridge of its winter stores. Now we can start thinking about shedding our winter layer of blubber, because it is easier to want to run, ride, climb and enjoy the outdoors (unless you are one of those crazed kayakers or surfers who don't mind being half-hypothermic) when the sun's not so emasculated. ("weak, feeble" - I am not implying a gender or gender bias, I swear).

For me, springtime is a promise. A promise that I won't be moldering forever in the wet half-light of a more northern latitude. A re-birthing of lost hope in a drowning world, one that will eventually dry out. I imagine the land as a depraved alcoholic who has given up and is slipping into a drink-induced coma, only to be slapped awake and given a really greasy breakfast and strong coffee, then manages to sweat through the delirium tremens and embrace the dry sunshine, breaking free of the perpetuating darkness. Oh the glory!

Okay, maybe that is a little dramatic. But I sure like it when I know the freezing icy hail I am experiencing will very soon be superseded by the warming, waxing sunshine. It makes it that much easier to appreciate the power and dramatic light of a storm when you know the clouds will soon part and sunbeams will shoot through.