Ode to the Wooden Walking Stick 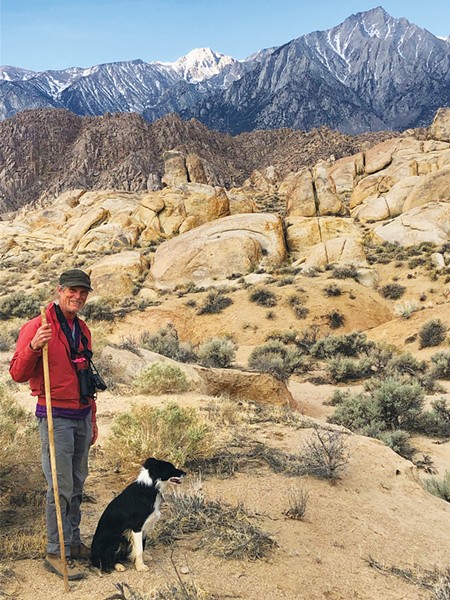 Photo courtesy of Tom Lisle The author hiking with trusty companions, the walking stick and Pip the dog.

Quadrapeds are better evolved for traveling over the planet than we are. With only one foot to recover from the missteps of the other, we bipeds are continually courting disaster. But with a walking stick we become tripedal, crossing creeks from rock to rock or on logs barely big enough to bear our weight. On easier terrain, our arms, otherwise just flailing away, are put to better use braking and pushing us up the trail.

While walking devotees prefer telescoping graphite poles more and more, I remain a hold out for the wooden walking stick.

I first began carrying a walking stick on backpacking trips in my 20s. I would pick up a suitable stick as I set out and cast it aside at the end of the trail. Unbeknownst to me, I was acting out a search David Duncan poetically describes in his novel The Brothers K. In it, his character takes urban youths into the wilderness to begin a search for an inner life that is "like a blind man learning to get around a dark but beautiful city at night with one of those long, sensitive canes. Going into the wilderness alone is simply a way of getting your cane."

My first take-home stick was a beaver-chewed willow branch found lying on a gravel bar in Prairie Creek. The beaver had cut it at an ideal diameter and length, and improved the grip and general looks by chewing off the bark and leaving fine teeth marks up and down the surface. Without modification, it balanced perfectly between my middle and index finger on a knob of a former twig so I could carry it in two relaxed fingers as my arm swung to my gait. Soon, planting the stick became as mindless as planting a foot. Thus, I discovered the aesthetics of a gloriously imperfect walking stick. Tragically, on a bad day a few years later, I broke my stick when I got it stuck between creek cobbles on the Lost Coast, slipped on a rock and fell full length in the wet. I grieved.

Since then, though I keep an eye out for another beaver-chewed masterpiece, I've resorted to cutting walking sticks from living willow sprouts reaching for sunlight on the banks of the Mad River. (Even there, finding the right limb takes some looking.) I then peal the bark, shave off the bumps and allow the stick to dry.

A good stick is fairly straight, shoulder tall, about as big around as a quarter and weighs a few ounces. Fine qualities emerge with use: The grip wears smooth but firm; the business end frays, producing a felt-like surface that adheres to slick rocks, like the sole of a fishermen's wading boot. With familiarity, a good stick becomes more than just an implement. Although wooden sticks have slipped behind the graphite telescoping variety in technological innovation, they retain the capacity to gain soul. My organic stick has the timber, heft and resilience of a limb bone. It shortens about an inch per year, reflecting my mortality.

To take this one step further, the spirituality of walking sticks is sanctioned in the Bible: "Even though I walk through the valley of the shadow of death, I will fear no evil, for you are with me; your rod and your staff, they comfort me" (Psalm 23). No mention here of a telescoping graphite pole. More stick than staff, my stick could neither part the Red Sea nor dislodge Little John from a foot bridge, but it does bring me comfort.

My stick is not to be trifled with, however. As a hydrologist with the Forest Service, I was visiting my crew who were laboring in the August heat of the Klamath Mountains, sieving a few hundred kilograms of gravel and sand from Clear Creek to determine the distribution of particle sizes. Every data-gathering tedium has at least one distraction and that day it was a heat-crazed, biting horsefly with outrageous iridescent eyes. The big fly landed on a boulder nearby and in the next instant, my stick, with no conscious guidance, swept through the air in one true arc and smote the fly. The crew, crouched in their labors, regarded their samurai.

Walking sticks have many other applications. In general you can do things with a 7.5-foot arm/stick appendage that you can't do with a 2.5-foot arm, especially when the end is replaceable and invulnerable to pain:

• When you point out something with a 6-foot stick, "Where?" becomes an evasion.

• When the march up the pass is a bit much for your 8 year old, insert the stick under her armpit and pull her along.

• Use it as a monopod for binoculars or a camera.

• It acts as a probe for mushrooms and rattlesnakes.

• It works as a pee-sniffing dog prod.

Not everyone has such high regard for the wooden walking stick, as you will find when you attempt to check your stick in at the airport. It will get no respect from United Airlines despite being tops on the list of items to bring on backcountry adventures in faraway lands. I once flew to Phoenix en route to the Sonoran Desert. To effect its disguise and avoid boarding with a cudgel, I checked in my stick inserted into a fishing-rod case. Sure enough, it didn't arrive with the rest of my baggage. Maybe the duct-taped end of a stick protruding from the case gave away the seemingly worthless contents. Negotiations with Lost Luggage were getting nowhere.

"Yes, it's a fishing rod case. It's worth, umhh, about $500." How can you pinpoint the value of a wild stick you have found, cut, peeled, whittled and shared hundreds of miles with? "How would you like to be sued for a snakebite?"

Happily, the stick reappeared and we had a great time exploring the desert together. No snakes.

Tom Lisle (he/him) is a retired hydrologist living and walking in Humboldt County.

Get Out hiking Walking stick