Of Cubs and Men 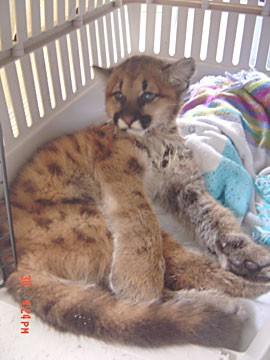 Last week a reader came into the Journal office with what sounded like a really juicy story tip. It involved a death, a government agency and a cover-up. And it wasn't an isolated incident. The agency responsible for protecting the victim, it was alleged, had a hidden agenda and a history of past offenses. For the sake of expediency? To save money? She wasn't sure.

There was only one problem: It was going to be difficult to uncover the truth. The non-profit whose job it was to defend the victim wouldn't go on the record, I was told, because it was afraid of losing its funding, and the government agency, of course, would deny any wrongdoing.

I called an agency spokesperson and explained the situation. He said he hadn't heard of the incident but promised he'd do some research and get back to me. I got in touch with my original source again. He's lying, she said. Perhaps, I thought, but I needed a primary source to confirm that. She'd do her best, she said, but she knew how the system worked. She was afraid that the truth would end up being buried. She got in touch with her source, but s/he still wasn't willing to go on the record. There was too much at stake. In fact, s/he worried s/he had already said too much.

Then there was a break in the story. After leaving multiple messages on the non-profit's answering machine, a volunteer called me back with the director's contact info.

On Friday evening, after work, my cell phone rang. It was Amanda Auston, director of the Humboldt Wildlife Care Center, and, contrary to what my source had told me, she seemed quite willing to talk about the mountain lion cub that had been picked up at the end of April on Highway 299 and sent to the Department of Fish and Game's Wildlife Investigations Lab in Sacramento, where it was euthanized due to head trauma and a possible spinal injury.

"I wish the cub was given the chance to recover," Auston said in a follow-up e-mail last week, "because I think there was a fairly good possibility it would have. However, there was definitely no guarantee."

My source had received information from someone who was certain that the cub's injuries weren't serious enough to warrant euthanasia. Auston, on the other hand, said that the cub was in bad shape when they got it. It was emaciated and couldn't stand up. She had taken it to the Arcata Animal Hospital where they ran various tests, the results of which gave Auston hope the animal might survive. Still, the local vet wasn't able to say for sure if the animal had suffered head trauma. The state veterinarian in Sacramento, on the other hand, determined it had and opted to euthanize the two-month-old cub.

Department of Fish and Game Spokesperson Steve Martarano said last week that deciding whether or not to euthanize a mountain lion is always a tough call. "You try to do what's best for all involved," he said. "We do make that effort [to place them in a facility], but often times they're injured so badly." Moreover, once a mountain lion cub has come in contact with humans"there is zero chance that [it] can be rehabilitated and released to the wild," he said.

Auston understands all of this, but on a gut level she wonders if captivity is really worse than being put down. "If it had recovered, it would have spent the rest of its life in captivity," she said in her e-mail. "... Personally, I don't think that would be such a bad thing (considering the only alternative to captivity was euthanasia) given the cub's age and provided a good home in a large natural enclosure could be found. However, I realize some may argue against that — which I can understand. ... In wildlife rehabilitation, there is rarely a situation where the answer is black or white. Most of the time, it's a large gray area. ..."

The same can't be said for conspiracy theories: They tend to eschew gray for the Manichean black and white of good versus evil. Perhaps being part of some vast DFG plot gave the cub's death more meaning, but it did little to help ferret out what actually happened to it. Unfortunately, for readers and journalists alike, the real story is rarely the most scintillating version of the truth and is often painted from a pedestrian pallet of variegated shades of gray.