Of Pentaprisms and SLRs 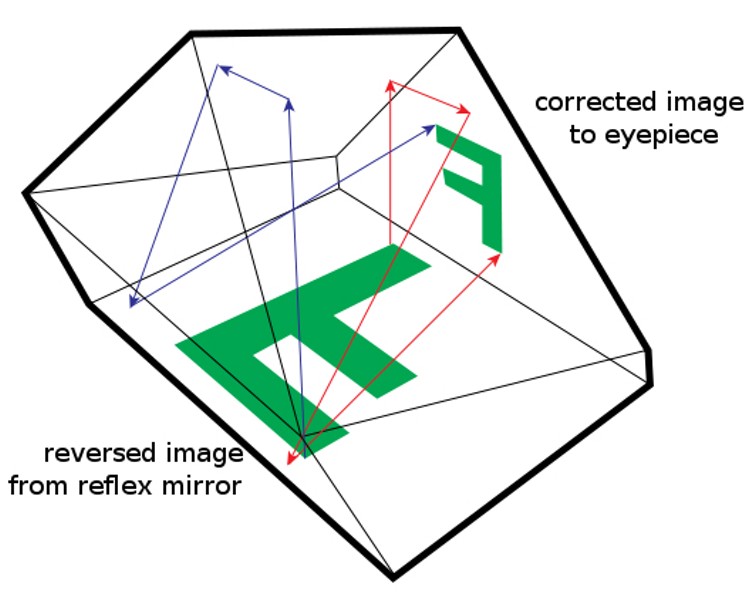 Barry Evans With the lens removed, the 45-degree mirror of an SLR can be seen, with the screen above it. Above that, housed under the word OLYMPUS, is the pentaprism.

Most serious photographers I know worship at the altar of the pentaprism, the key component of a Single Lens Reflex (SLR) camera, and its digital equivalent, the DSLR. One look through the viewfinder of an SLR usually suffices to convince the most loyal "point and shooter" that the image they're seeing is richer, more accurate and real than all the hi-definition view screens in the world. In fact, the view though the viewfinder of an SLR is the world, while what you see on the screen on the back of a typical non-SLR digital camera -- well, it's the difference between looking out of the window and looking at a TV picture of what's out the window. Night and day!

Of course, you aren't really seeing the view that the film (or, in a digital camera, a Charge-Coupled Device, CCD) "sees," whichever type of camera you use. But viewing via a pentaprism -- more strictly, a roof pentaprism -- is the closest we get to a perfect image in a modern camera.

In an SLR, light from the lens is intercepted by a 45-degree mirror up and through a screen into the subtle angles of the pentaprism before being sent through the viewfinder. Suppose the camera is aimed at a letter "F" (see diagram). After being reflected (the Reflex part of the name) by the mirror, the F appears upside down and back-to-front on the screen (big F). A light ray is first reflected by one side of the "roof" of the pentaprism, goes horizontally across to the other side of the roof, back down to the inclined front (lens) side of the prism, from where it's reflected out through the eyepiece (small F). When viewing through the eyepiece, you get the uncanny feeling that you're looking at the actual scene without any intervening lens, mirror, screen and prism, so clean is the system. (In a non-SLR, light from the lens simply falls onto a CCD which sends an electronic image to the view screen.)

Wait a bit, though -- that's how we see through the viewfinder, but isn't a camera supposed to actually take photos? Once camera makers had perfected the pentaprism viewing system some 60 years ago, they were faced with a huge mechanical hurdle: how to flip the mirror out of the way (so light could reach the film or, more recently, CCD) and return it to its 45 degree position, all in the blink of an eye. They succeeded, and these days the mirror flip is barely noticeable for most shots.

We've come a long way since Nicéphore Niépce -- more on him in a future column -- took the first photograph in 1825.

Barry Evans' (barryevans9@yahoo.com) bravest act was throwing out 10,000 slides ten years ago. Check out his books at Eureka Books and his travel photos at Old Town Coffee & Chocolates.