Of Politicians and Robots

Soulless automatons can dash your hopes at the movies, too 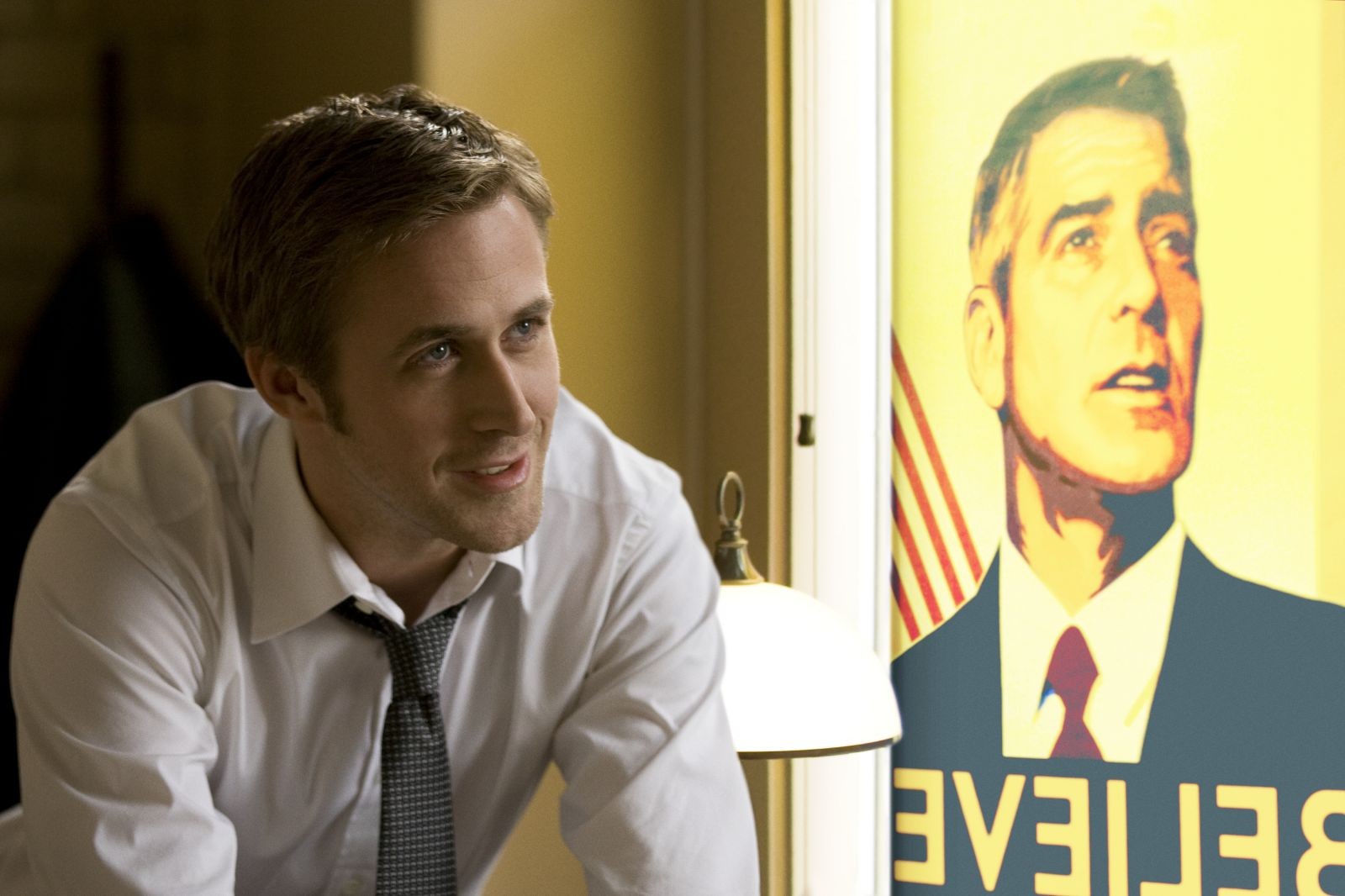 THE IDES OF MARCH. I wish there was more to be said about The Ides of March. I've enjoyed George Clooney's work as a director since Confessions of a Dangerous Mind (2002), but I don't think any of his subsequent films achieved the resonance of his debut. It could be argued that Confessions benefited more than anything from the sure hand of screenwriter Charlie Kaufman, whose run of dazzlingly inventive scripts puts him among the finest living American screenwriters.

Clooney and his writing/producing partner, Grant Heslov, are undeniably smart, talented writers, but their insistence on topicality occasionally sucks the air out of their work. Case in point: the masterfully crafted Good Night, and Good Luck (2005), which, despite a gorgeous aesthetic and riveting performances, never quite captured my imagination.

Like that film, The Ides of March is flawed in a minute yet critical way. On paper, it reads like a sure-thing: outspoken, left-leaning director-star working from his own script; campaign trail skullduggery just months before the real thing gets going; a cast so loaded with talent its impossible to ignore ... and yet, somehow, it never coheres.

To spin it more positively, the cast, not surprisingly, is this movie's best attribute. Ryan Gosling, as idealistic political consultant wunderkind Stephen Myers, continues a formidable streak of tough, subtle performances. His portrayal of innocence lost -- or more accurately, innocence killed and eaten by ambition -- is totally convincing, as are the performances of Phillip Seymour Hoffman, Jeffrey Wright, and Evan Rachel Wood.

Paul Giamatti is good, too, but sometimes his theatricality threatens the integrity of his scenes. Probably the flattest note, performance-wise, is Clooney's as Pennsylvania governor and would-be Democratic nominee for the presidency Mike Morris. He's certainly not bad, but the role demands little more of him than his usual smoldering intensity and easy charisma.

Ides succeeds technically, too. The late-winter hardness of the Midwest permeates the look and feel of the movie, traded occasionally for the weird familiarity of interchangeable hotel rooms, saloons, and temporary offices. It's paced well, and crisply edited, and it contains a few truly memorable sequences.

But by the end it's less than the sum of its parts. Unintentionally, the bloody-knuckles aspect of contemporary American politics loses its ferocity. We get to see the fight, but it feels staged. R. 102m. At the Broadway and Mill Creek.

REAL STEEL. Adaptations always run the risk of disappointing their fan base by altering an old story, casting it in a modern light. The stories of Richard Matheson are no stranger to the flaws and flourishes of film adaptation, though a number of them have withstood Hollywood's brutal re-branding, most notably I Am Legend, Stir of Echoes and What Dreams May Come. With a repertoire as impressive as Matheson's, you'd hope his most recent story-to-film, Real Steel (loosely based on his 1956 short story Steel) would be equally brilliant. Sadly, it falls short, landing somewhere between intolerable and hackneyed.

The film's most glaring shortcoming is the loosely constructed time line. The story is set in 2020, a mere eight years in the future. We are expected to believe that in that short time span, traditional boxing has fallen by the wayside to high-tech, violently spectacular robot fighting, which is presented as a legitimate enterprise firmly solidified in the hearts of fans across the country. Even with the leniency generally allowed to science fiction, this is a stretch. And the glaring flaws don't stop there.

What could have been a modern look at society's addiction to violence is instead an overly sentimental tale of a precocious boy (Dakota Goyo), his amoral father (Hugh Jackman) and their underdog robot. Every aspect of these relationships, and other relationships in the film, is predictable and sickeningly saccharine. The kid has chutzpah, but it's overpowered by the bland interactions with his father and the incredibly boring robot.

The plot never rises or falls. Rather, an unbelievably long exposition bleeds directly into one contrived montage after another. Truly, the film might have been better as one extra-long montage. At least that would have eliminated the clumsy foreshadowing, horrible dialogue and mundane secondary characters, and it would have added some much needed brevity. Real Steel may find a place in the hearts of 12-year-old boys, but the fandom will probably end there. PG-13. 127m. At the Broadway, Mill Creek and Fortuna.

THE THING. Again, playing with fire (or ice, in this case) by messing with a classic. This new Thing tries to sidestep the ire of John Carpenter fans by calling itself a prequel, not a remake. Same idea, though: Mysterious creature frozen in the ice of Antarctica awakens, shifts shape and terrorizes a group of scientists. R. 103m. At the Broadway, Mill Creek and Fortuna.

THE BIG YEAR. Ads for this comedy have highlighted its triple-funnyman cast of Steve Martin, Jack Black and Owen Wilson while carefully obscuring it's subject matter: competitive bird watching. (It's based on Mark Obmascik's 1998 book of the same name.) I don't know why. That's hilarious! PG-13. 103m. At the Broadway and Mill Creek.

Giant space monsters are on tap at the Arcata Theatre Lounge for Sci-Fi Pint and Pizza Night, Thursday from 6 to 10 p.m. Specifically, you can expect 1958's domestic abuse revenge flick Attack of the 50 Foot Woman, a local short called Astrobot Apocalypse and the self-explanatory Teenagers From Outer Space (1959). Free with a $5 food or beverage purchase. Sunday at 6 p.m. the ATL has the modern classic of stop-motion animation The Nightmare Before Christmas (1993). PG. $5.

On Tuesday the main branch of the Humboldt County library will continue its Alfred Hitchcock-themed Based on the Book month with Rebecca (1940), starring Sir Lawrence Olivier and Joan Fontaine. Free!

50/50. Half funny, half poignant tale of a 26-year-old (Joseph Gordon-Levitt) diagnosed with cancer. Costarring Anna Kendrick and Seth Rogen. R. 100m. At the Broadway, Mill Creek and Minor.

CONTAGION. Society is faced with a fast-moving, lethal, airborne epidemic. For Humboldt movie fans: It's kinda like Outbreak. PG-13. 106m. At the Broadway.

DREAM HOUSE. What's Daniel Craig doing in here? And Naomi Watts! Yikes, is that Rachel Weisz? How psychologically thrilling! Or am I dreaming? R. 110m. At the Broadway.

DOLPHIN TALE. True story of an injured dolphin saved by a prosthetic tail so that she could star in a ridiculously adorable movie. PG. 113m. In 3D and 2D at the Broadway and Fortuna, 2D only at Mill Creek.

THE GUARD. Brendan Gleeson's a crass and exuberant Irish cop and Don Cheadle a straight-laced FBI agent sent to help him bust a drug-smuggling ring. Odd couple! R. 96m. At the Minor.

THE HELP. A racially diverse group of women form an unlikely friendship around a secret writing project in segregated 1960s Mississippi. PG-13. 146m. At the Broadway and Minor.

MONEYBALL. When assembling your baseball team, don't go with your gut. PG-13. 133m. At the Broadway and Mill Creek and the Minor.

WHAT'S YOUR NUMBER? Alternate title: How Many People Has Anna Faris Had Sex With, And Which One is Mr. Right? R. 107m. At the Broadway.