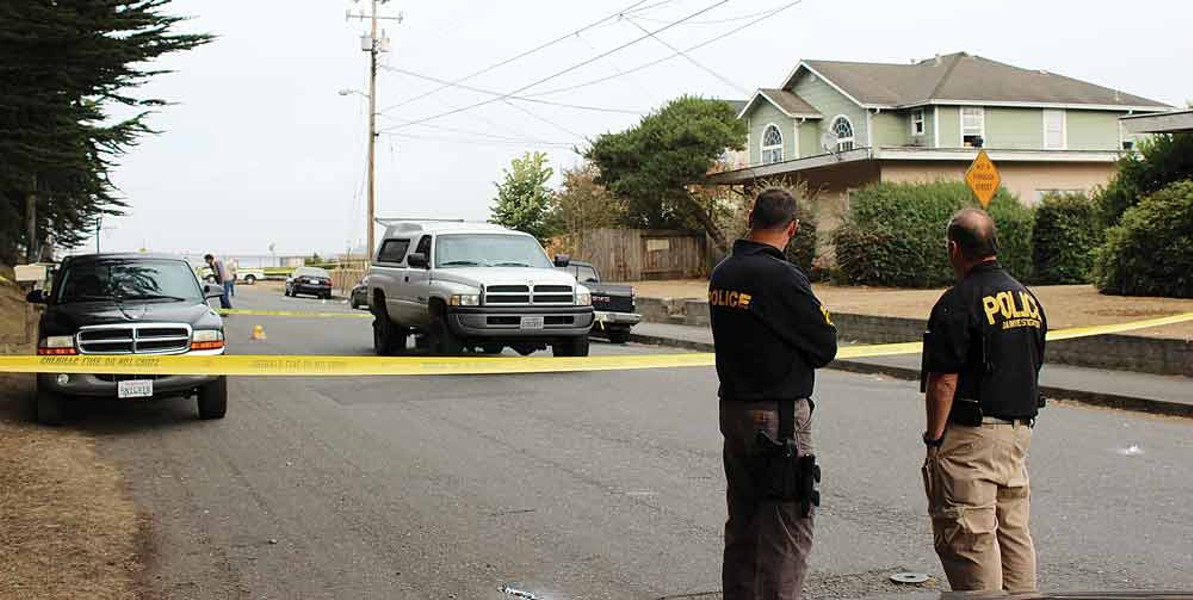 "Shots fired. One down." Those were the four words yelled into a Eureka police radio shortly after midnight on Sept. 18 after a 22-year-old man was shot and lay dying on the front lawn of his cousin's home. Those words also initiated a complex protocol for what essentially will be three parallel investigations: the first to determine whether the officers involved acted criminally; the second looking at the potential liability exposure for the city; and the third to determine whether the involved officers followed department policies and whether those policies need to be changed.

Details of the Eureka incident remained scant as of the Journal's deadline Tuesday, but the shooting occurred as officers were looking for two people wanted on felony warrants in the 1600 block of Allard Avenue. An officer in the area reported seeing two subjects in an argument, one of whom he believed had a gun. He called for backup. Ultimately four officers confronted Thomas "Tommy" McClain — a recent transplant from the Fresno area who worked for a local roofing company — and radioed into dispatch, "We've got one at gunpoint." About a minute later, shots were fired, reportedly after McClain reached for a gun.

Amid a public clamoring for answers, Mills said he wants a "thorough, complete, forensic examination of this incident" and won't release details until he is confident they are accurate. Mills will rely on the work of a multi-agency team tasked with investigating the homicide. In the wake of the shooting, Mills sat down with the Journal to discuss how his department handled the incident from the moment shots rang out early that Thursday morning.

EPD is in the process of updating its entire policies and procedures manual, and has yet to finalize revisions to its section on handling of officer-involved fatalities. The existing policy — enacted by former Chief Garr Nielsen amid controversy over the 2007 in-custody death of Martin Frederick Cotton II — calls for the California Department of Justice to step in and lead an investigation. But, the DOJ disbanded most of its investigative functions several years ago and shuttered its Redding office. The agency simply no longer has the capacity to investigate Eureka's officer-involved shootings, so the department had to go off-script Sept. 18 and initiate the county's Critical Incident Response Team (CIRT).

Immediately after the shooting, Mills said, officers called an ambulance for McClain, secured the scene and waited for reinforcements. Mills said he got to Allard Avenue about 20 minutes after the shooting and spoke briefly with the officers involved — simply asking them if they were OK and if they needed anything. He said the officers gave a brief statement to senior detective Ron Harpham — who is leading EPD's homicide investigation — at the scene. Known as a "public safety interview," Mills said the statement wasn't meant to recount details of the incident, but simply to convey what police needed to know to finish safely, properly secure the area and process it for evidence.

Then, the four officers were instructed not to discuss the incident with anyone — under threat of firing — and transported back to EPD headquarters, where they were set up with off-duty officers to keep them company and to keep an eye on them. Mills said the officers' hands were swabbed for gunpowder residue and their guns were seized, with evidence technicians logging how many bullets remained in each. Detailed photographs were taken of each officer in uniform, and clothing with potential physical evidence was seized. The officers were allowed to confer with an attorney, who advised them of the process and their rights, and to call their families to tell them they'd been involved in an incident but were safe.

But, Mills said, official statements were not taken that morning. "We don't interview them in detail until we get enough evidence to talk to them intelligently so that if something is amiss, we know," Mills explained, adding that studies have also shown officers' recollections to be more accurate 24 hours after a critical incident, when adrenaline has subsided and they've had a chance to rest.

Meanwhile, as the involved officers went through their process, Mills said Harpham surveyed the scene of the shooting, instructing officers to tape off Allard Street and ordering them not to let anyone into the cordoned-off area. From there, he returned to headquarters to activate CIRT, comprised of officers from EPD, the Arcata Police Department, the Humboldt County Sheriff's Office and the Humboldt County District Attorney's Office. Under the team's protocol, the agency involved in the incident has the authority to dictate how the investigation is handled, what personnel are involved and what agency will take the lead in the investigation. Opinions vary as to best practices, with some agencies preferring to tap another to lead the investigation into the conduct of its personnel to avoid any appearance of impropriety.

Mills said he wanted EPD to remain in the "coordinator" role of the investigation — not wanting to task another agency with the labor-intensive undertaking — but assigned the DA's office a co-lead designation. Mills said that because the DA's Office will ultimately make the determination of whether officers broke the law, he wanted its personnel involved from an early stage.

Harpham called in DA Investigator Marvin Kirkpatrick, as well as detectives from APD and the sheriff's office and a pair of DOJ criminologists. They all responded to EDP headquarters, where they were briefed before heading to the scene of the shooting. Mills said the team was given minimal information — just that there'd been a shooting involving four officers, that there was a dead subject at the hospital and a potential crime scene in the front yard of the Allard Avenue residence — so investigators would see the scene with fresh eyes. Before the team left, Mills said he admonished them: "In no uncertain terms, I want a complete, thorough and objective investigation. I know you love the people you work with, but we need objectivity here." In response, he said he got some "cockeyed looks," as if the investigators bristled at the implication.

Mills said the criminologists were tasked with processing the crime scene — with a special eye on the location of officer boot prints and shell casings — while detectives were sent to interview witnesses and write search warrants. Meanwhile, audio was pulled from the EPD dispatch system of all calls to and from the scene of the shooting and video was pulled from the responding patrol cars' dash-cam systems.

When the officers involved did ultimately give formal statements, he said it was classified as an investigative interview, so they weren't read their Miranda rights. "If at some point we got reasonable suspicion they are culpable of a crime, we would Mirandize them," he said.

Two of the involved officers remained on administrative leave as of the Journal's deadline, but Mills said they are doing in-house work for the department. He said they won't return to the field until passing a "fit-for-duty" assessment from a psychologist. "We want to ensure they are capable of doing their jobs," he explained. "This is a hugely traumatic experience and we need to make sure everyone is psychologically ready to step back out there."

The city's insurance carrier, the Redwood Empire Municipal Insurance Fund, is conducting its own review, and Mills said the information unearthed in the criminal investigation will also be used to conduct an internal review to determine if the officers involved followed EPD policy. Finally, Mills said he will also bring in outside use-of-force and critical incident experts to review the incident "through a different prism" to see if departmental policies need changing.

A community eager for answers will have to be patient. The criminal investigation will ultimately be turned over to the DA's Office for review, but that could take months as it will include forensic testing from DOJ laboratories that have a backlog of cases. After reviewing the case and determining whether or not to pursue criminal charges against the involved officers, the DA's Office will issue a public report.

Because the processes surrounding officer-involved fatalities is largely shrouded in secrecy, the public can grow uneasy. Some communities have impaneled citizen review committees to take an independent look at such incidents. In an article in Police Chief Magazine, Drew J. Tracy, a former cop who is now president of the Critical Incident Review Group, suggests a policy requiring a local district attorney to present every officer-involved fatality case to a criminal grand jury for review as a way to engender confidence in the entire process. "Sending every law enforcement shooting to the grand jury provides citizen scrutiny and reminds citizens that law enforcement does not believe its incidents are above citizen review," Tracy wrote.