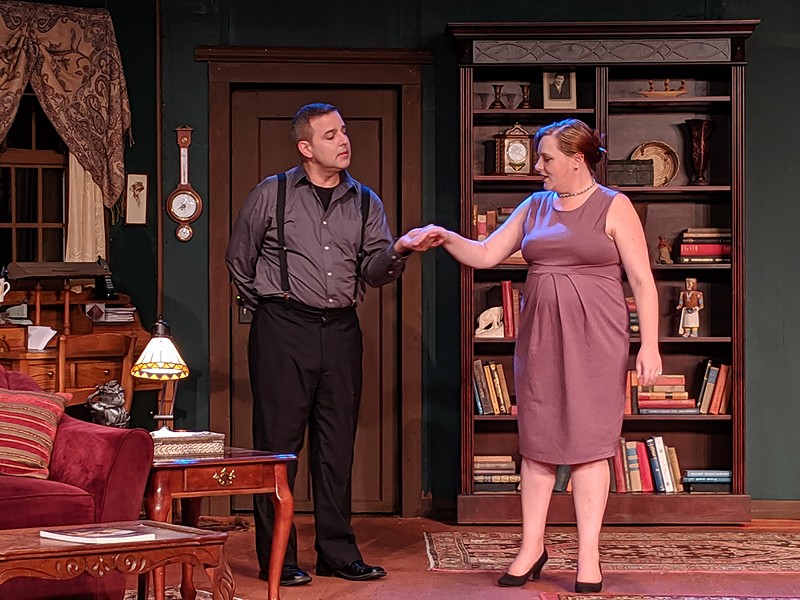 Photo by Calder Johnson David Simms and Scott Q. Marcus in the parlor mystery at NCRT

If you're looking for lighthearted entertainment that will have you wondering who did it right until the very end, you'll have a lot of fun with North Coast Repterory Theatre's latest production. Spider's Web is deservedly one of Dame Agatha's most popular staged works, second only in performance numbers to The Mousetrap. It has all the hallmarks of a classic Christie mystery: people who are not what they seem, dead bodies that appear and disappear, a house full of secrets and a collection of (sometimes inadvertently) comedic characters who at times rival the best of P.G. Wodehouse.

Our heroine, Clarissa Hailsham-Brown (a sly and sassy Sarah Traywick) is the second wife of Henry Hailsham-Brown, a frightfully proper foreign office official played with perfect precision by George Inotowok. The couple, together with Pippa (Fiona Siebert in a spot-on portrayal of the English schoolgirl of the 1950s — yours truly can relate), Henry's daughter from his first marriage, have moved into an English country house obtained at a remarkably low rent after the mysterious death of the previous occupant, a local antique dealer by the name of Sellon (pun presumably intended).

The Hailsham-Browns have three house guests. Sir Rowland Delahaye (a delightfully solicitous Dave Simms) is Clarissa's former guardian, Hugo Birch (Scott "Q" Marcus in full-on nervous Nellie mode) is a local justice of the peace, and a young man named Jeremy Warrender (a slightly creepy Steven A. Santos), who has designs on Clarissa. All three are on the receiving end of practical jokes dreamed up by Clarissa — her favorite pastime, which will take her into dangerous and uncharted territory down the road.

Rounding out the household are Mildred Peake, a strange gardener who came with the house (Toodie Boll with her crazy woman persona turned up way past maximum, to the evident delight of the audience), Elgin the butler (a suitably deferential Ken Klima) and Mrs. Elgin, the cook, whom we never meet.

The house, meanwhile, has its own tales to tell. Pippa has discovered a secret door that leads to a recess and a second secret door into the library, which she enthusiastically demonstrates to Jeremy. She has also found an envelope with potentially interesting historical autographs in a secret drawer in an antique desk that belonged to the departed Mr. Sellon. This latter item of furniture appears to hold more than the usual amount of interest for both Jeremy and an unexpected visitor to the house, Oliver Costello, Pippa's mother's lover and a suspected drug dealer (a scarily thuggish Ray Waldo), who claims Pippa's mother wants her back.

All this skullduggery is bound to lead to trouble and it does — naturally while Henry is off on a secret mission to pick up a foreign dignitary and bring him back to the house under cover of darkness. After Oliver Costello's head has a fatal encounter with a heavy-duty stick, there are various crazy proposals for corpse disposal that all go out the window when the police arrive — having received an anonymous tip about a murder at the house — and the body mysteriously disappears.

Inspector Lord (a rather overenthusiastic Queena DeLany) and grumpy Constable Jones (Leslie Keig, who provides some delightful comic relief during the second intermission) cannot get Clarissa or any of the other well-meaning characters to tell the same story twice. But in true Christie style, just at the point when Clarissa is sure she's about to be carted off to the police station and jailed for life, the real murderer attempts to kill again.

Director Carol Lang does such a great job keeping the action humming along that we are not only surprised by the ending of the play but also that almost three hours have passed since the opening of the first act. It's hard to see where anything could have been cut to shorten the running time without damaging the flow but there are two intermissions, and Kira Galloway's stage management keeps everything running smoothly. Calder Johnson's scenic design and construction is 1950s English-country-home classic, just begging for cocktail parties and games of bridge. Megan Hughes' costumes are home-counties neutral; the men's sleeveless wool pullovers are a nice touch, and Henry's peach tie and pocket square are most elegant. Howard Lang's sound design, Johnson's lighting design and the properties assembled by Diana Lynn and Carol Lang all come together to draw us seamlessly into the Hailsham-Browns' world.

My only real quibble with this otherwise rattling good production is the accents — not so much lack of quality as inconsistency. If everyone could just settle on a neutral mid-Atlantic accent rather than roaming randomly around the United Kingdom with an occasional foray into the Republic of Ireland, I, for one, would be a happy camper.

Four speak up for liberté, égalité and sororité in The Revolutionists, running Thursdays through Saturdays at 8 p.m. and Sundays at 2 p.m. through Sept. 28 at Redwood Curtain Theatre. Call 443-7688 or visit www.redwoodcurtain.com.

More French fracas breaks out on Sept. 26, when The Three Musketeers draw their rapiers at Ferndale Repertory Theatre. The Alexandre Dumas adaptation continues through Oct. 27 with shows Fridays and Saturdays at 8 p.m. and Sundays at 2 p.m. Call 786-5483 or visit www.ferndalerep.org.