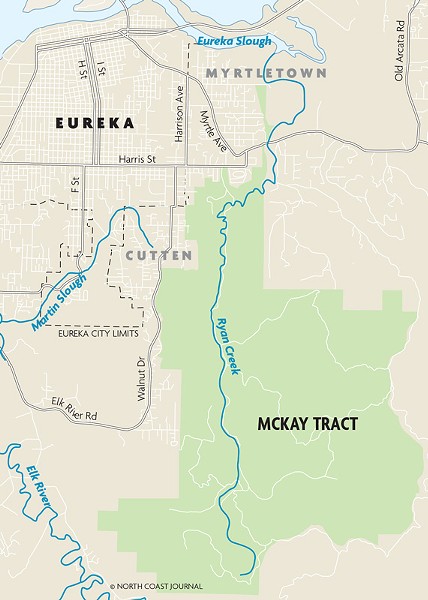 Humboldt County's board of supervisors is almost certain to get the keys to a $6.7 million chunk of property in the next several months — even if a few officials are looking in the gift horse's mouth.

The county — with aid from Eureka and other agencies — has been working on a plan to adopt a portion of the McKay Tract for years. The Trust for Public Land helped raise millions to purchase 1,000 acres of the 7,600-acre parcel from Green Diamond at no cost to the county, and staff from the county's public works department finalized a pitch to the supervisors Monday.

But there are concerns — namely, the cost of maintaining, protecting and policing the property with a tight county budget. "It comes debt-free," says Humboldt County environmental services Deputy Director Hank Seemann, "but it comes with a responsibility to manage and maintain."

In a report released this week, county staff predicts managing the McKay Tract as a community forest would cost more than $1.5 million over the next five years, which would be offset by around $1.2 million in timber and other revenue generated by the forest.

Over the next several decades, timber revenue will rise and cost will diminish, according to county projections. But that doesn't alleviate immediate concerns, particularly with a $3.6 million projected budget shortfall this year.

Opening the McKay Tract to the public would mean more crime, according to Sheriff's Office Lt. Steve Knight, and an increased burden for the agency with no current plan to fund additional deputies.

The area is currently patrolled by a private security firm, but the sheriff's office still responds to reports of dumping, wood thefts, homeless encampments, motorcycle trespassers and a variety of other crimes. "We've had dead bodies out there," Knight said.

While people regularly trespass on the McKay Tract for recreation and other uses, Knight says usage — legal and otherwise — is sure to increase with public availability.

At Tuesday's board of supervisors meeting, Seemann countered that notion slightly, saying he believes a high number of people currently trespassing on the McKay Tract for recreation decreases dumping, theft and further illegal activites. He speculated that granting legal public access would help keep crime down. "Allowing the public for appropriate use is an antidote for conditions like this," he said. And while it's not part of the county's current funding plan, Seemann said an ultimate goal would be to pay for a park ranger position, possibly in collaboration with the city of Eureka.

Arcata's community forest — touted by supporters of the McKay Tract acquisition as a model of success — is regularly patrolled by an Arcata Police Department forest ranger, who also monitors Redwood Park and the marsh. Between April and September, an additional officer is assigned to those areas to deal with regular reports of illegal camping, dogs off leash and loitering.

Arcata Police Chief Tom Chapman said the forest is widely used, and aside from occasional flare-ups of tension between people who use the trail system for different leisures, there are few problems. Arcata's timber harvest used to pay for the ranger position, but now that cost has been absorbed by the police department — a necessary function, Chapman said, evidenced by a rise in illegal encampments and other problems when the department suspended the ranger position for a few years around 2008.

Covering the forest's costs hinges on harvesting timber. A forestry consultant hired by the county projects 24 million board feet could be cut out of the property over the next 50 years for a total net revenue of more than $10 million.

Turning again to Arcata's forest as a model of success, Seemann said the city has a revenue surplus from timber harvest that's allowed the city to expand its forest and trail network. Good forest management could, optimistically, reduce the county parks' current reliance on the general fund to cover 40 percent of its costs.

If approved by the supervisors on April 15, the county would likely own the forest by June — but public access is still some time off. Entrances to the forest need to be identified and 17 miles of roads need to be upgraded or repaired.

Based on supervisors' reactions Tuesday, the acquisition is all but set to go through. There was a general congratulatory feeling as each of the supervisors thanked the agencies and county staff involved. Lamenting a small crowd in the chambers for Tuesday's discussion, 4th District Supervisor Virginia Bass said, "I believe the community trusts in us that we're making the right decision."

1,000 acres – Size of the initial acquisition being considered by the county in the McKay Tract, which totals 7,600 acres of forestland within the 9,400-acre Ryan Creek watershed.

17 miles – Amount of logging roads running through the property.

Check out the county's plans online at https://co.humboldt.ca.us/pubworks/mckayforest.