Despite high-profile closures, merchants say they will weather the storm

An Old Town fixture that has closed. Photo by Heidi Walters 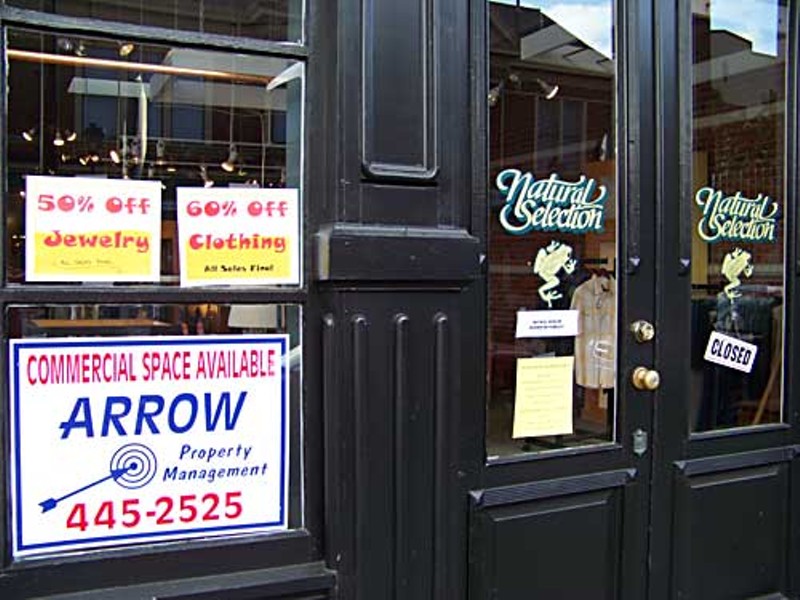 The empty windows of key, long-time Old Town inhabitants -- Natural Selection, Restoration Hardware, Geppetto's Toys -- might make you think a viral merchant-vanishing bomb has gone off, and who knows whom the infection will take down next.

But not everything is as it seems, according to Charlotte McDonald, executive director of Eureka Main Street, an association of Old Town and Downtown businesses in the area between the waterfront and 8th Street and A Street and I Street.

"It's not all just doom and gloom," McDonald said last week.

In the past year and a half, 15 businesses have closed (or are about to). But 27 businesses have opened. She said the recession may have played a role in some of the anchor stores' closures, but it wasn't the only reason. Restoration Hardware -- the flagship store of a nationwide chain -- was sold recently to a private corporation, which decided to close it and another store (and, to open one in Canada).

"And with Natural Selection, [owner] Roy Kohl has wanted out of the retail business for some time now, especially with [his] opening of Oberon Grill, now -- that's very labor- and time-intensive," said McDonald. (In a Times-Standard story, Kohl blamed the closure on the recession, and also on stores like Target and Bed, Bath and Beyond which opened earlier this decade; a number of merchants pooh-pooh that latter notion, however.) And Geppetto's closed for a number of reasons, including personal. (Natural Selection and Geppetto's are keeping their Arcata stores open.)

"If we were in a strong, thriving economic climate and this was happening, it would be a lot bigger concern," said McDonald. "I mean, it's a concern, don't get me wrong. We've lost a lot of industry up here. Look at Humboldt Creamery, filing Chapter 11. Look at what's happened to the timber industry -- we don't have a pulp mill now. All those things have direct effects on what's going on with our businesses."

"Prom season's getting us by," Abram said. "But it's been quiet. Still, we have a lot of people who are trying to shop local, and, with the prom coming, we're getting a lot of moms."

As if on cue, the door opened and three girls hurried into the gowns room -- a colorful froth of everything from long and elegant to short and poofy -- followed moments later by two girls coming in to pick up their already ordered dresses.

Next door at Going Places, a travel store, owner Janyce Neiman had her inventory paperwork spread out on the front counter.

"We just had our 23rd birthday," she said. "So we're doing OK. But it's not a good time. We're very cautious, and we are watching item by item. I weigh every order -- do I send it off now? Do I wait? I make a list of orders and then prioritize. And I've always done that, but now instead of weighing pounds, I'm weighing ounces."

Neiman said some of her suppliers have closed and sales reps are losing their jobs. The travel industry felt the pinch earlier than other markets -- trips are expendable items. But this isn't the worst she's seen.

A couple stores down at Ciara's Irish Shop, sales associate Eileen Henderson was putting labels on a mailer for the shop's fifth anniversary sale, which coming up. The shop has been there for 30 years, but the current owner -- C.C. Cree, who also owns Cotton Works -- has had it five years.

"We had a great month, great sales, " said Henderson. She added that things were good over at Cotton Works, too, a few doors over. Cotton Works is closing in June, but not, Cree says, because of the recession.

"I told my landlord last fall -- before the recession -- that I would not be renewing my lease," Cree said. "I've had this shop three years and, mainly, I'm just gone from home a lot. My husband wants to see more of me. And, I'm in a marathon -- the San Diego Rock ’n' Roll Marathon on May 31 -- and I need time to train. I do the bookkeeping for both shops, and the buying."

Inside Bella Baskets -- across the street from the empty Restoration Hardware -- Mark Sanchez was contemplating his good fortune. The shop's been there two years, and he and his wife have owned it for a year.

"Our business is still increasing over last year, month by month," he said. Christmas was the busiest, with baskets of local products racing out the door. "January paid for itself. February was booming the last two weeks. And March was good enough to close and go on vacation."

Sanchez allowed that because his shop's not been around long enough, it's hard to really gage how it's doing in the recession. But, he said, he doesn't actually see a recession in Humboldt County -- not like in the rest of the country, anyway. The tourists are coming in, the locals are loyal. There could be more traffic, certainly.

Scott Brown, one of the new proprietors of Eureka Books, next door, said a group of Old Town merchants recently formed to promote the Old Town core. He's concerned about all the closures. He also predicts that the empty storefronts might be filled with existing businesses rather than brand new ones. For example, North Soles, which has a shop tucked into a hidden corner of the F Street Plaza but is planning to move into the south half of the old Restoration Hardware building this summer. Humboldt Herbals had an upstairs shop but recently moved to a more visible, spacious downstairs corner spot on Second Street.

A rather bright spot, it turns out. Midday on Monday, the herbal shop was bustling.

"Since we moved downstairs, in February, our business has doubled and we've hired three new herbalists," said owner Julie Caldwell.

Back the other direction, on F Street at The Works music store, proprietor Larry Glass, a city councilman, said Old Town's holding its own. He said he's applied to the city for advertising funds to pull more tourists off Highway 101.

"Times are tough down here, but we are all united," Glass said. "And they're no more dire than anywhere else, locally or in the state. For all the hoopla about businesses closing down here, I've seen it worse. Shortly after Bayshore Mall opened, that was worse -- especially on 5th Street, where more than half the stores were empty."

However, Glass added, nobody prospers unless everybody prospers, and the demise of certain stores at the mall, like Mervyn's and Gottschalks, doesn't help anyone.

"Mervyn's employees use to shop here all the time -- there were a lot of vinyl buyers," he said. "The thing that has hurt us the most is so many regular customers are moving away for work. That's the dark cloud hanging over us this summer. And we're counting on short-trip vacationers to see us through."