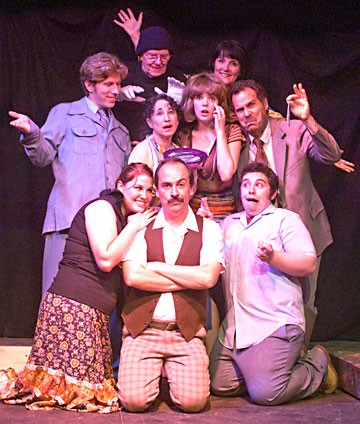 Michael Frayn is an unusual playwright. He began as a reporter and columnist, and has written several novels and books of philosophy, such as the nearly 500-page tome, The Human Touch, which I've actually read (encouraged by the San Francisco Chronicle, which paid me to do so.) Probably his most famous play is Copenhagen, a drama concerning two founders of quantum physics. His most recent plays are biographical and political, and he's a well-regarded translator of Anton Chekhov.

Then there are his comedies, one of which was so subtle that lead actor Ian McKellan didn't realize it was supposed to be funny until opening night, when he heard the audience laughing. Noises Off is anything but subtle, although Frayn maintains it is philosophical: He writes that it concerns the actors' fear of facing the unrehearsed world outside the theatre. But like another British philosophical playwright -- Tom Stoppard -- Frayn found that philosophy goes over best on stage when it is expressed by people dashing frantically about, with at least one young lady in her underwear.

Noises Off is generally acknowledged to be his comic masterpiece, and one of the funniest plays in contemporary theatre. I saw the original Broadway version in the ’80s, from the back of the 1,100-seat Brooks Atkinson Theatre (the last rush ticket I ever bought), which at that distance was like watching a circus of comical ants. So I made sure to sit close to the stage at Ferndale Rep.

In the first act we see a theatre company in a rushed final rehearsal of a farce called Nothing On. The set -- part of a country house replete with the many doors required by farce -- is turned around for the second act so the backstage is visible, and the relationships and romantic misalliances set up in the first act result in riotous physical comedy. (It was probably this act that Frayn kept rewriting, to include new business invented by various casts.) The stage is turned around again for the third act, for a performance at the end of the tour when the actors' relationships have devolved further, and the chaos has spilled onto the stage.

The first act is usually just the set-up for the next two, but in the Ferndale production it was genuinely funny. The cast performed the physical comedy of the second act flawlessly, producing the most hilarious moments. The third act had lots of payoffs and comic business but seemed less coherent, which is an odd word to use about chaos.

Besides accomplishing the physical bits at break-neck speed, the actors also had to quickly sketch characters in the first act, aided by Frayn's skill in providing most with attitudes and catch phrases to capture their characters. The entire cast -- Adina Lawson, Bryeon Earle, Sam Cord, Brittany Gonzales, Bill and Gerri Cose, Jim Berry and Daniel Amaral -- performed both jobs with skill and conviction. Sam Cord deserves special mention for the most acrobatic stunts.

All in all, it's a high quality production, with a solidly handsome set designed by Gary Franklin (during the two unavoidable but draining intermissions, audience members seemed to like watching it be turned around), and 1980s period costumes (complete with leisure suit) by Christen Condry Whisenhunt. Director Renee Grinnell, who did Lend Me A Tenor at NCRT last season, again demonstrates her facility for fast-paced farce.

Some of the physical humor involves a telephone cord, a lost contact lens and a plate of sardines. It's fascinating that in the age of cell phones, disposable lenses and microwaved snacks that this comedy still works. Also the story involves a style of theatre and a theatrical tradition unfamiliar to most of us here, and largely gone. Even the titles (Noises Off, Nothing On) are British and theatrical puns.

But even without the depth of reference, the basic structure and theatricality of Noises Off can delight audiences in Humboldt County. Plus the style of Frayn's language is familiar -- he shares a comedic (and philosophical) lineage with Monty Python, Douglas Adams and Beyond the Fringe.

Besides, theatre stories have their own charm and wide attraction. People who have participated in theatre may have encountered actors like the earnest Frederick, the pompous but vague Garry, etc., or they recognize the stage culture of endearments and entanglements, and this knockabout will have additional resonance, and even sweetness.

But you have only this weekend to catch Noises Off at Ferndale Rep. It closes Sunday.

Apart from Ferndale, if things are quiet around here this weekend it may be because several Dell'Arteans (Michael Field, Barbara Geary, etc.) and Four on the Floorians (Jackie Dandeneau, David Ferney) are away. They're appearing in Boston with the Dell'Arte production of Tartuffe, at the Cutler Majestic Theatre of Emerson College on Saturday. It will doubtless be some compensation for the city not hosting the World Series after all.