The flora and fauna of Ft. Lauderdale 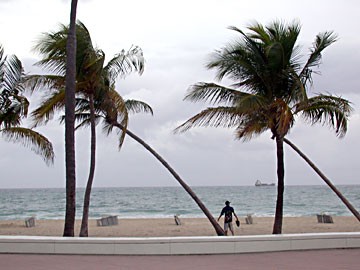 I almost got my wish. A few weeks ago, I was jonesing for mojitos at midnight in Miami (even the alliteration is compelling) and suddenly there I was, stumbling down Fort Lauderdale's seedy Beach Boulevard at 2 p.m. on a Thursday, mildly irritated by the gray sky and wind and prospect of a storm. For this I came to Florida?

At the beach, five or six guys rode out to sea and back on wavejammers, snowboard/windsurf/parasail hybrids that rip you across the surf so fast you leave a rooster tail wake. Catch a sizable enough wave and you'll be hurled aloft momentarily, tossed 10 or 20 feet into the air before plummeting back to the ocean. I took a photo with my cell phone and e-mailed it home. "Did not know this was a thing," I wrote.

Across the street, a row of '80s era beach bars hosted the local fauna. Guy living the dream playing "Down Under" on guitar, accompanied by a prerecorded drum track, in a Corona-themed bar complete with beer in buckets. Middle-aged couples from Jersey with their lips wrapped around jumbo sangria glasses while staring vacantly at the beach. Crowds of sunburnt Midwesterners gathered, mouths agape, around a T-shirt shop selling shirts with slogans like "I Pee in Pools" and, weirdly, "I Support Single Moms," above a silhouette of hot babes dancing around a stripper pole.

I was starting to get that "I am witnessing the collapse of civilization" feeling that often comes over me when I'm around large numbers of Americans on vacation. That feeling would, I knew, give way to a rising sense of guilt and self-loathing over the fact that I couldn't enjoy a simple day at the beach with my countrymen. Knowing that the guilt and self-loathing was on its way only seemed to accelerate its arrival. I passed yet another bar offering 2-for-1 Giant Sangrias and thought, "You know what my problem is? I haven't had nearly enough 2-for-1 Giant Sangrias today." I grabbed a table on the sidewalk and placed my order.

I had come to Florida for the Tropical Plant Industry Exhibition (see, I did find a way to work plants into this story). After my talk I walked the show floor and looked at bromeliads, proteads and anthuriums, all primped and oiled to a high gloss. After that I was ready for the beach. What I wasn't ready for was the bewildering local flora around the resorts.

Impatiens the size of shrubs. Coleus growing like trees. Houseplants — rubber trees, philodendrons — stuck in the ground in rows, some of them still in their pots. Royal palms on the beach leaning dangerously to the left — always to the left — and, in the fast draining sand, deprived of nitrogen until their leaves turned yellow. The yellowing is helped along by a bug called the royal palm bug, a local insect that sucks the life out of the Cuban species of royal palm — and it just so happens that the Cuban import is the one that really took hold around here. The chemical solution to this bug infestation is too dangerous for homeowners to attempt, so their only option is to pour fertilizer in the sand — 15 pounds a year is recommended — to green up the plant. That nitrogen no doubt washes right into the ocean, but never you mind. We're on vacation here.

While I contemplated the natural history of the royal palm, the couple sitting next to me eyed their almost-empty sangria glasses mournfully. "This two for one thing," the woman asked one of the close shaven, square-jawed Germans who staff all the bars along the beach, "How does that work?"

"Well —" said the German, probably wondering what part of "2-for-1" the woman didn't understand, "you buy one and you get the other one free."

"But those two drinks," the woman said, peering into the depths of her gargantuan glass. "Are they both in here?"

No, they were not. The 37 cents' worth of Hawaiian Punch and 52 cents' worth of cheap rum that passed for sangria and retailed for $13.95 actually came with the promise of a free refill. You might say that the second gallon of rum-laced high fructose corn syrup is your reward for getting through the first one.

That's how I rationalized it, anyway. Eventually I sucked down the last of my maraschino cherries and got up unsteadily to catch the final shuttle back to my hotel. On the way out of the bar I saw a sign posted on the beach, next to the wavejammer rental stand. "Turtle Nesting Beach," it read. "Street lights off/reduced March through October."

Turtles? On the beach? I realized, with the kind of clarity that only 2-for-1 Giant Sangrias can deliver, that even the reptiles were suffering under an illusion. Just turn down the lights and maybe the turtles would overlook the Bubba Gump Fish Shack, the Midwesterners in their "I Pee in Pools" T-shirts, and the disaffected German waiters staring across the ocean to their homeland. The turtles were expected to go on, against the odds, to find a place in the sand to lay their eggs. Whether they were being swindled or saved, I couldn't be sure.

This was not much of a habitat for turtles, and it was certainly no habitat for me. I was so grateful to see the hotel shuttle bus driver, a Cuban who had brought me to the beach a few hours earlier, that I gave him all the loose bills in my pocket for a tip, as if I was leaving a foreign country and handing over the last of the money I wouldn't be able to use once I got home.