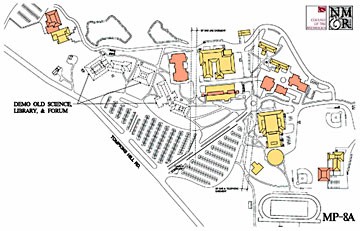 The Physical Science Building at the College of the Redwoods sits atop a grassy knoll on the corner of the campus. As was explained in detail at a special meeting of the community college's board of trustees last Thursday, the building also sits atop something called the Little Salmon Fault. In fact, much of the campus seems to be standing on shaky ground.

As it turns out, the fact that the fault runs through campus may result in a windfall of sorts — a state funding stream in excess of $50 million in bond money to pay for a collection of new buildings. If all goes according to plan, revenues from Proposition 1D, a 2006 school bond intended for repair and upgrade of existing campuses, will help replace the Student Services and Administration Building, the Student Union and the Forum Theater, and pay for construction of a new academic building with assorted science and humanities classrooms.

Naysayers who spoke against the plan had a range of complaints: Some questioned the assertion that the "seismically deficient buildings" would fall down in an earthquake. Many simply did not want the look and feel of the campus to change. They love the modern redwood and stone structures built in the mid-1960s. As Peter Portugal, son of CR's founding president Eugene Portugal put it: "Those buildings represent the heart and soul of CR."

Others questioned the wisdom of taking on a major renovation when the campus is facing a variety of other troubles. Bill Hole, an instructor in CR's historic restoration program, pointed to the school's budget crisis, the threat to its accreditation status and an almost complete turnover in the upper administration. He asked, "How can a school with such a record of bad management believe they have the qualifications to take on such a large project with public money?"

An oft-repeated complaint was that project was approved without sufficient public comment. The trustees approved the modernization plan, basically an overhaul of the entire campus, at a meeting in September 2006 in Del Norte County that interim CR President Tom Harris described as "a retreat." There was little or no public input, a fact that Harris noted and more than one trustee apologized for. Last week's meeting was supposed to make up for that, but as more than one person pointed out, the plan was "already a done deal." The only thing on the agenda for the special meeting was a reaffirmation of the authorization.

In a straight-to-the-point presentation at the start of the meeting Harris explained that the college did not start with plans for a major overhaul. Because of the faults, what began in 2004 with a remodel that would have been paid for by Measure Q (the $40 million bond passed during the administration of former CR President Casey Crabill) spun into something much larger.

Geologist Frank Bickner of LACO Associates presented the science. Trenches dug by his firm suggest that the Little Salmon earthquake fault, first discovered in 1953, runs under all of the main buildings you see as you look up the hill from the parking lot. Bickner explained that under California's Alquist Priolo Special Studies Zone Act new structures cannot be built within 50 feet of an active fault. Buildings built prior to the law's 1972 passage are OK, but if a major remodel is planned, and it costs more than 50 percent of the value of the structure, it's demolition time. Well, maybe.

While the final phase of the CR master plan posted on the school's website notes, in all caps, "Demo old Science, Library & Forum," Harris said emphatically that "there has never been a plan to tear the buildings down." It was suggested that the supposedly threatened building could be leased out. Who might rent them was not made clear.

Project proponents, most notably wheelchair-bound trustee Tom Ross, pointed to the campus' lack of accessibility for handicapped. New building would solve that.

In the end, the appeal of easy money outweighed all concerns. The trustees voted 7-1 in favor of reaffirming their previous decision. The project will move forward.

One thing that did not come up at Thursday's hearing was the appeal of the project's Neg. Dec. (mitigated negative declaration of environmental impact) filed by Alex Stillman, a preservation proponent who sits on the Arcata City Council. In all likelihood the question of whether there should be an EIR will make its way to the Board of Supervisors. You have not heard the last of this issue.