On Stage Over the Holidays 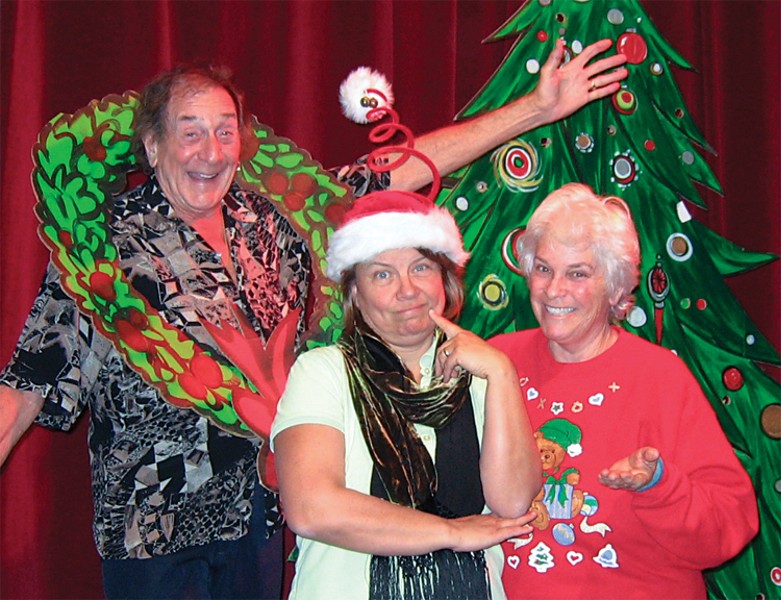 Coming to North Coast stages are celebrations of the holidays and plays about the complications of families celebrating the holidays.

Dell'Arte begins the celebratory season with its annual series of (mostly) free holiday shows, beginning Nov. 25. This year the Dell'Arte Company takes on the season's high art standard, The Nutcracker, but with a low rent form of cartoon comedy with a recession edge in The Nutcaper, a tale (or tail, according to the pun-filled press release) of three unemployed and hungry mice who "occupy" the Rat Kingpin's fancy mansion but wind up taking the famous Nutcracker hostage. Amidst the comic mayhem, a holiday message of generosity and kindness emerges, all to music that includes Tchaikovsky's tunes for The Nutcracker ballet.

Joan Schirle directs a cast that includes Pratik Motwani and Meridith Anne Baldwin (who appeared in Mary Jane: The Musical). As usual the show starts at the Carlo (Nov. 25-27) and tours far and wide, including Klamath, Orick, Point Arena, Redway, Scotia, Bridgeville, Burnt Ranch, McKinleyville, Trinidad, Eureka and Arcata, before returning to the Carlo Dec. 15-18. Tour dates, times, and locations are below and at www.dellarte.com.

The current economy also influences the Arcata Playhouse presentation of A Recessionary Christmas Tale on Dec. 1-3 and 8-10. It features Jackie Dandeneau, Lynne and Bob Wells and Amy Tetzlaff, with live music by Tim Randles, Tim Gray and Marla Joy, together with different special guests for each performance.

The Humboldt Light Opera Women's Chorus, otherwise known as The Babes, celebrates the season with a preview concert of holiday music on Saturday, Dec. 3 at the Morris Graves Museum of Art in Eureka. The event is scheduled from 6 to 9 p.m. More information: humboldtarts.org. The Babes perform their full concert on Saturday Dec. 10 at 7:30 p.m. at the Arcata United Methodist Church. Selections include sacred and celebratory music, and such offbeat seasonal songs as "Christmas Shopping Blues." More information: hloc.org.

Redwood Curtain invites everyone to a Holiday Open House during December Arts Alive! in Eureka on Saturday, Dec. 3 from 6 to 9 p.m. In addition to good cheer, they will announce their 2012 stage season and present a sneak preview of their January radio show. www.redwoodcurtain.com.

Meanwhile, two plays opening on North Coast stages feature families coping with familiar holiday complications. Back at Ferndale Repertory Theatre by popular demand is A Christmas Story beginning Friday, Nov. 25, at 8 p.m. It's the same story as the movie, which has been seen in 24-hour marathons on various Turner cable stations since the ‘90s, but with Ralphie, the young hero, recalling his Depression era Indiana childhood as an adult. It's also the same play that Ferndale presented in 2008, and not the musical version that's been touring with Peter Billingsley, the actor who played Ralphie in the movie, as producer.

The HSU Department of Theatre, Film & Dance presents the contemporary holiday comedy, Some Assembly Required for two weekends, beginning Thursday, Dec.1, in the Gist Hall Theatre. Once again a family gathers for the holidays, and even though there's reportedly a poignant echo of A Christmas Story, this time the humor is edgier, with some dangerously zany characters mixed in with holiday mayhem. One review of the play noted that this family "makes the Simpsons look like the Brady Bunch." No leg lamp, but how about a Christmas tree decorated with barbed wire?

Some Assembly Required is by Canadian playwright Eugene Stickland, and though it's had more than 30 productions, it's a rare opportunity to see it in the U.S. Directed by Rae Robison, the cast features Evan Needham, Romy Clugston (an exchange student from Australia), Kyle Handziak, Karianne Nelson and Shea King. Director Robison says there's a very good chance that playwright Stickland will be on campus for opening weekend. Some Assembly Required plays Thursdays through Saturdays, Dec. 1-3 and 8-10 at 7:30 p.m., with a 2 p.m. matinee on Dec. 11. More information: HSUStage.blogspot.com.

For Arcata, Eureka, McKinleyville, Trinidad: Free tickets can be picked up at Wildberries, Umpqua Banks and Pierson Building Center; in person at the DAI Box office, and tickets will be available at the venues before each performance.

The audience is asked to contribute non-perishable food items, which the cast collects and donates to local food banks. ?It is estimated that Dell'Arte's annual holiday show reaches approximately 7,000-10,000 people each year, including many school-age children.