On the Jimmy Reed Highway 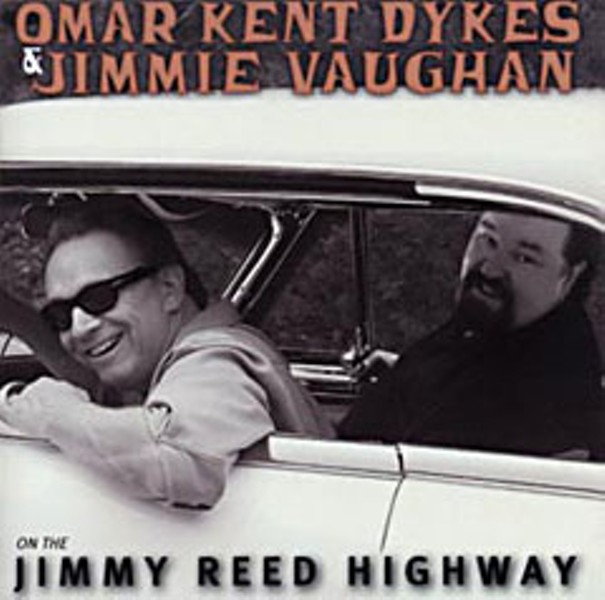 'On the Jimmy Reed Highway' by Omar Dykes/Jimmie Vaughan


Less is more. The space between the notes is at least as important as the notes themselves. That concept has been well enunciated by bluesmen like James Harman, Freddy Below and Jimmie Vaughan. This new release from Kent "Omar" Dykes and Jimmie Vaughan is a great illustration of the idea.

Chicago Blues has always had a receptive audience in Texas, and Austin became a second home to many Chicago blues vets in the '70s. Antone's Nightclub welcomed Muddy Waters, Buddy Guy and Jimmy Reed. Kim Wilson, Lou Ann Barton, Angela Strehli, Jimmie and Stevie Ray Vaughan — they got to meet and perform with the real-deal blues stars.

Reed was one of the first bluesmen to regularly chart with Top-40 hits — "Big Boss Man," "Baby, What You Want Me To Do," "Ain't That Lovin' You Baby." I remember hearing those as a kid, and Reed's wailing, lonesome harmonica impressed many listeners who weren't often exposed to the blues, as did his relaxed, drawling vocals. For some reason he was accepted by American radio while Muddy Waters and Buddy Guy had to wait 20 years for "crossover" acclaim. But Reed was part of the fabric of the '50s and '60s, and a tribute album is justified by his influence and appeal.

While a few of the tracks here include Derek O'Brien on rhythm guitar, this is mostly a stripped-down, bare-bones operation — just like a Jimmy Reed record. It's a tribute to Reed, with nine of his songs and three bonus tracks — two by Omar Dykes (of Omar and the Howlers) and one by Reed's lead guitarist, Eddie Taylor.

Vaughan dedicates the album to Taylor, who also served as Reed's arranger, saying, "This record is as much about him as it is Jimmy Reed." Taylor championed the unobtrusive guitar and can be nearly invisible on some Jimmy Reed sides, though he anchored the rhythm and dropped in fills like he was decorating a cake.

Kent "Omar" Dykes came to Austin from Mississippi in 1976 with The Howlers and first recorded in 1980. His voice really sounds like Howlin' Wolf — not over-done, just plenty raspy, in a way that marries well with the material and the accompaniment. Ronnie James, formerly of Little Charlie and the Nightcats and The Fabulous Thunderbirds, plays acoustic stand-up bass on this release, and his swinging sense both propels and puts the brakes on, as needed. James Cotton sits in on harp on "Caress Me, Baby," with Lou Ann Barton dueting with Dykes. Cotton really nails the Reed harmonica sound without sounding like an imitation Reed.

Barton sings on three more tracks, and her harmonies shine that subtle light, that easy grace, that Texas twang, too. Delbert McClinton sings and plays harp on "Hush, Hush," while T-Birds bossman Kim Wilson plays on three tracks, and the late Gary Primich plays harp on a couple more. All these performers have long left the beer joints and pass-the-hat gigs of their early days, earning top dollar and top billing around the world, but they still bring the roadhouse sound alive. Song after song has me tapping my foot, and if I shut my eyes there's a jukebox and pool table, a wooden floor and those red vinyl bar stools.

So this is a gathering of the best Texas blues players of their generation — matured, but still possessing the prowess they showed at the start, and romping through a set of Jimmy Reed numbers in free-range fashion. With the wide-open spaces.