Outside Mullingar at Redwood Curtain Theatre 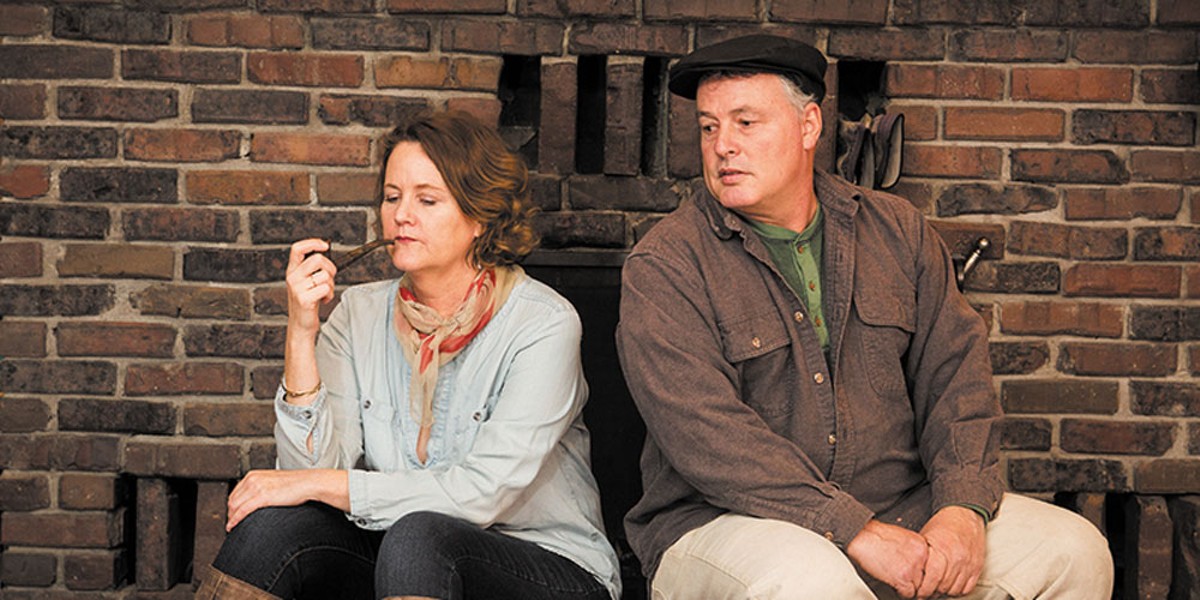 The people and legacy of Ireland have long loomed large in literature, cinema and the stage. So much so, that with its elements of sorrow, longing, upheaval and loss, it can risk veering into well-trod territory, or even cliché, never mind that these are vital moving parts to the historical character of the people. And through the view of American audiences looking at the page, the screen or the stage, what comes to the mind's eye is more the Irish-American experience, such as in the works of Eugene O'Neill, than the Emerald Isle.

Which is where John Patrick Shanley's Outside Mullingar, directed by Kristin L. Mack at Redwood Curtain, takes an interesting sidestep, telling a modern story that's timelessly Irish, with elements particular to the nation and at the same time universal. No mean feat that, but Shanley, a Tony and Pulitzer winner for Doubt (which was staged outstandingly in 2010 by North Coast Repertory Theatre) is up to the task. Mullingar, which had a Broadway run five years back, was inspired when Shanley, born and bred in New York City, visited the Irish farm where his father was raised.

The play opens in the Irish midlands. Tony Reilly (Jerry Nusbaum) doesn't plan to leave the family farm to his son Anthony (Craig Benson), and tells him as much as we first meet them, returning from the wake of Christopher Muldoon, owner of the adjacent farmland. Tony just doesn't feel that his son takes the same joy in farming that he did, and thinks him not up to the task, even though it's quite clear that Anthony is relentlessly hardworking, feeling at home and doing his best thinking out in the pastureland.

Next door at the Muldoons are the widow Aoife (Elisa Abelleria) and her daughter Rosemary (an excellent Pamela Long), and the same question of land inheritance. Rosemary is a pipe-smoking, outspoken free spirit who still resents Anthony pushing her into the mud on a strip of land between the families' farms back when they were children. The mud-pushing fracas is one of a couple good running jokes throughout the story, and not the only one that turns out to be very telling all the way to the play's end.

The fates of Anthony and Rosemary as they must live with the uneasy dynamic of being neighbors and figuring out what to do with their farms is a fine underpinning to the story, and Shanley's dialogue is sharp. The repartee is both comedic and romantic, and it's great without calling attention to itself. Benson and Long have great energy together, and the nimble four-person cast works especially well in Redwood Curtain's intimate setting. While some great Irish-isms fly ("You're half woman, ya are," "He had the blood of kings in 'im") the play is much more focused on the life choices that face people such as Anthony and Rosemary. And despite all the talk of hay bales and the great rain sound effects by the crew under Mack's direction, we get a glimpse of a 21st-century Ireland, one in which the characters drink not whiskey but tea (and one very pivotal bottle of Guinness) and there is talk of the demise of the "Celtic Tiger," the Irish economic boom that collapsed so drastically in the mid-aughts.

If perhaps Shanley's story doesn't always blaze into wildly original territory, that's more than made up for by the poignant moments in the story, which never lags or has a wasted word. It's a tale of heart and insight, and on the evening I saw it, there was nothing more fitting than arriving in a driving downpour and departing during a break in the rain. I'd recommend seeing it within the same circumstances, but that one's out of our hands, really.

Outside Mullingar plays at Redwood Curtain Theatre in Eureka on Friday and Saturday at 8 p.m., with a Sunday matinee at 2 p.m. Call 443-7688 or visit www.redwoodcurtain.com.

Dell'Arte International's first year students bring the Blood and Thunder to the Carlo Theatre from March 17 through 19 at 8 p.m. with their explorations of melodrama. Call 668-5663 or visit www.dellarte.com.

It's fun with twins when North Coast Repertory Theatre presents William Shakespeare's tale of mistaken identity The Comedy of Errors from March 24 through April 16. Call 442-6278 or visit www.ncrt.net.