Blitzen Trapper and The Parson Red Heads, plus TacocaT, Slugabed, AQ and The Flecktones 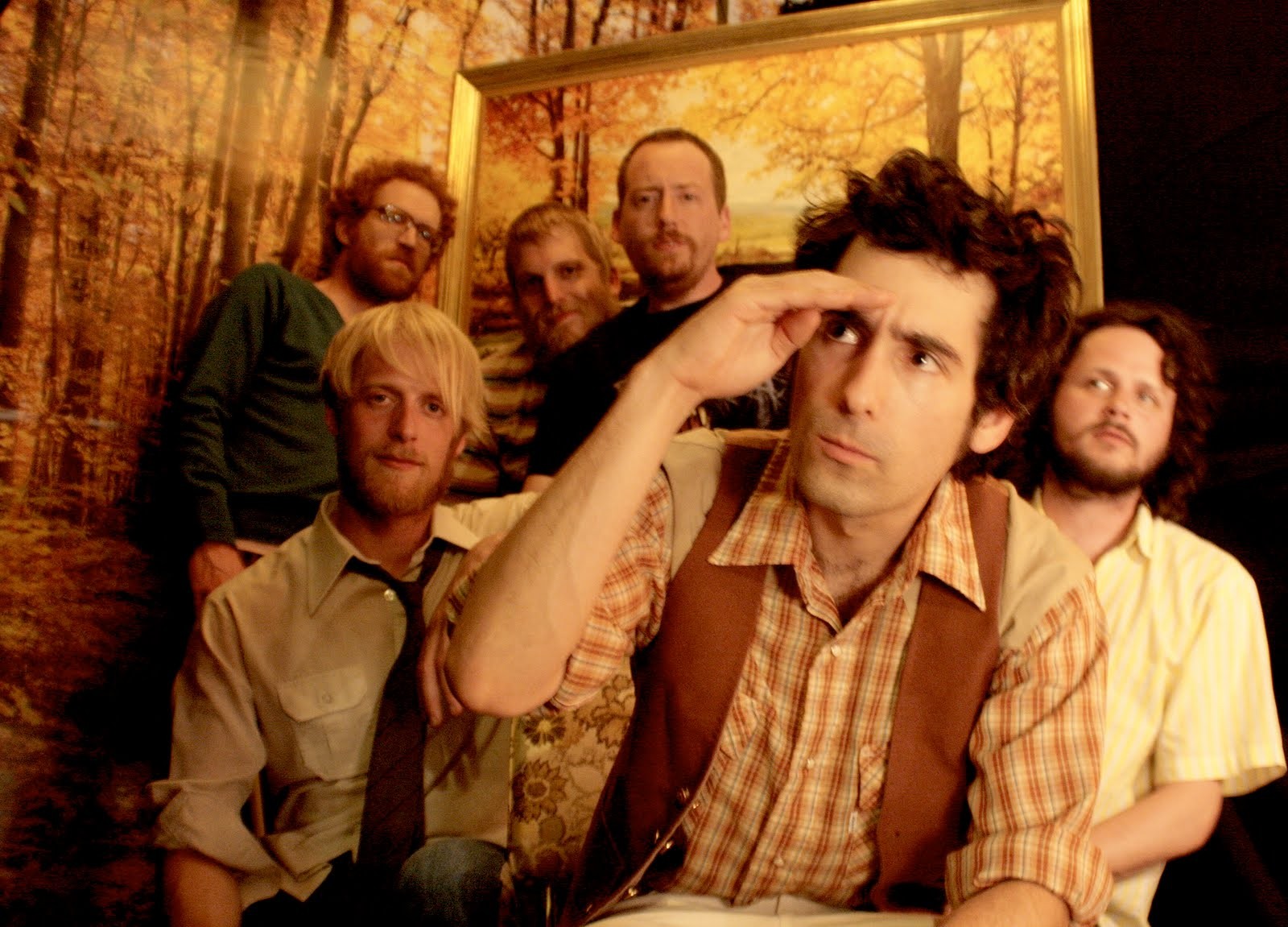 Fans of folky indie rock know the work of Portland's Blitzen Trapper, especially since the band's cool breakthrough album from a few years back, Furr. Perhaps you heard BT play "Might Find It Cheap" earlier this winter on Letterman. American Goldwing from 2011 is the latest disc, another neo-classic collection of folk rock songs about love, loss and sometimes drinking. Like just about every band on the planet (well, officially just 500), B-Trapper's heading down to Austin for SxSW, gigging along the way, in this case with fellow Portlanders, The Parson Red Heads. The ginger neo-psyche-folk quartet recently achieved a pinnacle of online indie hipness: a Daytrotter session, as well as the ultimate (unrelated) über-hip Portland rite of passage: an appearance on the IFC series, Portlandia. If you've seen the series you'll remember the first season opening song, "Dream of the ‘90s" ("...is alive in Portland"); season two includes a spoof/takeoff, "Dream of the 1890s," with Fred Armisen in a big beard explaining how the Victorian dream lives on in mutton chops, artisanal baking, etc. and singing along with P-Red Heads dressed as a barber shop quartet. First date on the Blitzen/Red Heads West Coast tour is the Sunday show at Humboldt Brews.

Also on the way to SxSW, Seattle's grrrl-fronted palindromic pop-punk quartet TacocaT, whose new 7-inch EP, Take Me to Your Dealer, includes a tune, "Volcano," rumored to be in contention for one of High Times Magazine's prestigious Doobie Awards. You'll find the foursome at the Shanty on Monday night, sharing the bill with local "girl group gone to space," The Monster Women.

World Famous Productions continues its rep for cutting edge electronica with a Saturday show at the Arcata Theatre Lounge featuring local fave Danny Corn down from Portland, Salva, up from S.F. and local producer Cacao with headliner Greg Feldwick aka Slugabed, a rising star on the London scene, over here on his first ever American tour. As he put it via Twitter, he's "set to invade some countries and kill people," adding, "It's just whether I can get away with it or not." WFP describes him as exploring the "outermost reaches of dubstep, hip hop and beyond," but I don't hear much dubstep or hip hop in his soon-to-be-released Ninja Tune package, Time Team. There is plenty of "beyond" however, with some truly awesome electronic excursions into the unknown.

Local blues jammers Children of the Sun seem to be on a mission to open for or play alongside every band possible, spanning multiple genres. Friday the Sun Kids join forces with The Absynth Quintet for a show at the Jambalaya, AQ's first since New Year's Eve. Humboldt's finest "kinetic gypsy jamgrass" band just got some good news: AQ is on the schedule for this year's Strawberry Music Festival Memorial Day weekend -- a big deal and way cool.

My old friend Karen Dumont is back in town Friday for a gig at Ferndale's Cafe Main Street with Spanky McFarlane (of Spanky and Our Gang and The Mamas and The Papas fame), a benefit to raise money for Karen's cataract surgery.

Tribute of the week: Rusty Evans and Ring of Fire playing Johnny Cash tunes Saturday night at the Riverwood. Yes, he'll be dressed in black -- Rusty even looks like Johnny.

Busy week at the Arcata Playhouse: Thursday the Redwood Jazz Alliance brings in Harris Eisenstadt's Canada Day (see our calendar section for more on that). Friday it's a local take on The Vagina Monologues (moving to the Eureka Theater Saturday and Sunday). For Sunday, former local Joshua Boronkay assembled a crew he calls "Monsters of Humboldt Folk" with Berel Alexander and Niko Daoussis of The Bucky Walters, aka Cyber Camel. Don't know about the show name since none of the three is really what I'd call a "folk" singer. For starters, Josh describes his own sound as "more along the lines of old New Orleans, neo-ragtime." The HSU grad currently lives in Oakland, but he went through the music program at HSU and was a founding member of The Bucky Walters. He also played bass in an early incarnation of the Berel Alexander Ensemble. "We all know each other's tunes, so we'll collaborate," said Josh, who is hoping to persuade Joey from The Buckys to join in on banjo. Josh explains that Cyber Camel is Niko's solo project. "He has some looper stuff and has a kick drum and high-hat, so it's a one-man-band. I may get up and lay down some bass, maybe guitar. And I'll get him to jam with me too."

Monday at the Playhouse Chris Parreira presents San Diego-based songwriter Steve Poltz, whose biggest claim to fame (and undoubtedly an ongoing source of royalties) is a co-writing credit on the Jewel hit "You Were Meant for Me." (He also toured with her and played on her records.) Opening the show: the amazing local fingerstyle guitar picker Todd Krider.

Wait, we're not done: Tuesday the Playhouse hosts the return of Red Molly, an East Coast folk trio with Molly Venter on guitar, Laurie MacAllister on guitar and banjo and Abbie Gardner on guitar, dobro, and lap steel -- all three sing and harmonize. No, the band is not named for Molly V. (who is a brunette BTW). Venter is actually the newest member, although she's been with the trio for almost two years. The band name comes from the to-die-for redhead in Richard Thompson's brilliant ballad of love, crime and a motorcycle, "1952 Vincent Black Lightning."

Also on Tuesday, a show at the Jambalaya featuring self-proclaimed "guitar geek" Deke Dickerson, whose website shows him playing an electric with four necks. (The Delta Nationals open.) An awesome picker in the country swing/rockabilly style, Deke is also a collector with a twisted sense of humor. His www.dekedickerson.com site is worth a visit if only for the array of bizarre album covers alongside promo photos of armless musicians and gospel singing midgets.

Speaking of Latin beats, Ponche! plays at the Jambalaya Saturday.

The Red Fox Tavern brings the hip hop Friday with ELI, formerly known as Smoov-E, plus Mumbls, In The Redd, The Affiliates, Dot Smith, Krai and Tip Toe.

Then you have a bit harder, more political brand of hip hop Monday at the Jambalaya: the "Revolutionary Culture Tour" featuring M1 of Dead Prez and DJ Child.

A classical Arabic and contemporary fusion music concert Saturday at the Bayside Grange features the Georges Lammam Ensemble, a Bay Area-based combo led by Lebanese violinist Lammam. The queen of Humboldt bellydance Shoshanna is putting on the concert. Yes, she will dance, and before it's over, the dance floor will open up for everyone.

Banjo innovator Béla Fleck returns to HSU's Van Duzer Theatre Wednesday with the original line-up of his band, The Flecktones, as in Howard Levy on keyboards and harmonica, Victor Wooten on funky bass and Victor's brother Roy, aka Futureman, on Drumitar (an electronic-percussion instrument of his own invention). Those who know their Flecktones history will remember that Levy was part of the original band in the ‘90s, but was replaced by Jeff Coffin. When Coffin joined the Dave Matthews Band full time a couple of years ago, Levy returned. Word is, this is the final tour with this configuration, so say goodbye.