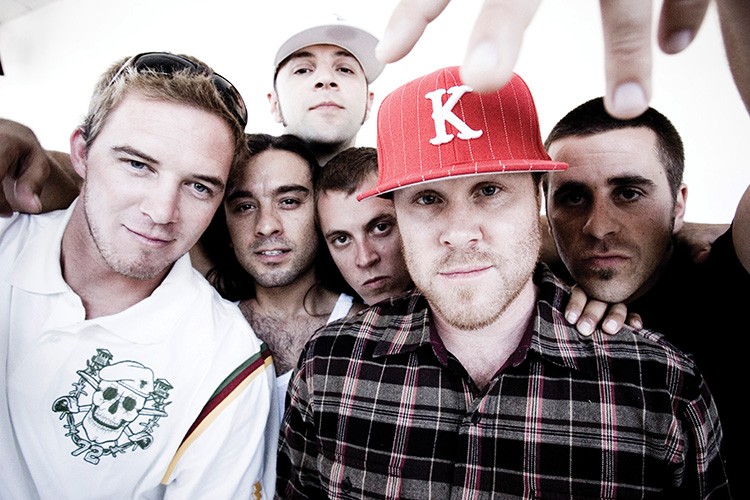 Start with a surfer dude's devil-may-care attitude, add a touch of ganja-fueled reggae, a little taste of punk rock and hip hop and you have Slightly Stoopid. The band got its start in the mid-'90s in Ocean Beach when best buds Miles Doughty and Kyle McDonald were in high school. Bradley Nowell from the like-minded trio Sublime heard them and signed them to his label, Skunk Records. He even guested on a track on Slightly Stoopid's 1996 debut, Slightly $toopid. Sadly, Nowell died from a drug overdose before the record came out.

Stoopid stuck with the slightly sublime reggae-ish beach vibe and ended up working the festival circuit, playing Coachella, Lollapalooza and the N.O. Jazz Fest. The lineup expanded to seven along the way, pulling members from The B Side Players and John Brown's Body along with special guests from other bands. Stoopid's most recent disc, Top of the World, includes guest spots by Angelo Moore from Fishbone, Chali 2na from J-5, reggae veterans Barrington Levy and Don Carlos, and saxophonist Karl Denson, an unofficial eighth Slightly Stoopid member. Denson is along on the winter tour that brings Slightly Stoopid to the Mateel Saturday night. (He's also playing the Mateel's Black and Red Ball on Feb. 2, with his own band Tiny Universe.)

DJ Red's "100mph Soul Party" Thursday at the Jambalaya features master crate-digger Red with Mantease and Matt 'n Adam spinning "nothing but up-tempo, hip-swingin' '60s soul," says Red. "Joining us will be Humboldt Pin-Ups, with their lusty new 2013 calendar available for purchase. (Rumor has it some of the models will be there to sign calendars, but only if you ask nicely.)"

Across town at the Arcata Theatre Lounge Thursday, it's a wild alt. extravaganza with the synth-pop girl group Blood Gnome playing songs about "kittenless futures, gator wrestling, Italian horror films, jerks and tsunamis." The gals are joined by surf-noise garage rock duo Shores Galore with Ellis Wallace from The Kiwis and Gregg Dix from Super Brown, and The Hand of Doctor Foxmeat Paints a Monochromatic Rainbow, a doom-pop, witch-house, death-rattle glitch-hop solo project.

If you've been paying close attention you know that the recently opened Siren Song Tavern on Second Street in Old Town is a new venture from the folks who used to run the Accident Gallery on C Street (a little art shop off The Works remains). Thursday the gallery's Accident Slam poetry night returns at the Siren Song with a poet's open mic, a competitive slam and a reading by David Holper, who has a new chap book, Ghosts of Silence (Kindle only). In addition there's bluesy music by ShugaFoot, house band at the nearby Speakeasy. Proceeds go to sending a poet to the Slam Nationals.

Davis folky Rita Hosking sings about forest fires, demolition derbies, culture clash, the working class and hope at a Humboldt Folklife show on Friday at the Arcata Playhouse. Hoskings is backed by Cousin Jack, a combo that involves no cousins -- instead it includes her husband, Sean Feder, on Dobro and banjo, Andy Lentz on fiddle and Bill Dakin on standup bass. Expect tunes from a new CD, Little Boat, available only at shows until its official release in March.

Looks like the Fieldbrook Family Market might be closing shop in February, at least for the time being. While neighborhood grocery stores do not typically serve as music venues, this one has had folk and rock bands playing in the store and out back on a regular basis for years. Old Dog plays country rock there on Friday, then there's at least one more party Feb. 1, featuring Jeff Jolly.

The Jambalaya calendar may say Children of the Sun are at the club Friday night, but the band's bassist, Drew Mohr, says otherwise. He also plays fretless bass for the HSU Calypso Band spin-off Steel Standing, a 10-piece steel pan ensemble led by Rebekha Zdunich. That's who's playing. Opening the show: Gobzilla, with Zach Lehner from Area Sound on the mic and Gobi on turntables.

The Angelina Inn has been home to Mike Riley's Country Jamboree on Sunday afternoons for a couple of months now, with a core band featuring Nashville transplant "Mighty" Mike Riley on vocals and guitar joined by lead guitarist John De Mello (also from Nashville) and bassist John Dias, formerly of The Bandits. It's not exactly an open jam session but a wide range of local musicians show up to take part. This week Riley and company also play Saturday night as Mike Riley's Country Band.

The Bamboozlers play Sunday at Robert Goodman Wines, a show that bassist Chuck Johnson describes as the trio's first "real" gig, "since we usually just play parties, Arts Alive and such." The band definitely swings. "Dancing? You decide," says Chuck.

On the EDM front: The KMUD electronica contingent is throwing a benefit at the Mateel Friday night: Luminous New World features "glitch-a-delic soul whomp" by L.A.-based producer Nico Luminous, Oakland's Knowa Lusion and Humboldt's own Hypha, plus visuals by Duff and a fire show by The Mischief Lab.

Mia NorCal and Bass Harvest present a Conquest Records showcase on Saturday at Red Fox with junglist DJs 45 Thieves and Walkingstick and local support from a busy Grasshoppa.

Savage Henry's monthly CU Last Tuesday stand-up night at the Jambalaya features big deal S.F. comics Matt Lieb, Ryan Papazian and OJ Patterson headlining a night of stand-up with locals Josh Duke, Tony Persico and John McClurg, all hosted by Joe Whiskey-Whiskers Deschaine from Ba-Dum-CHH. If Tuesday isn't good for you, the S.F. crew is hanging around to do two more shows Wednesday, an early all-ages thing at the Works followed by the first ever comedy night at the Angelina Inn. Ha!