An exacting critic tries his hand 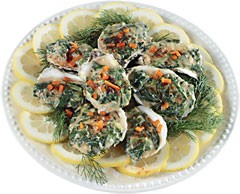 It all started with my locavore-restaurant concept, a whimsy that became a column. But readers took it seriously: "When are you opening, what's the name going to be, who are the chefs?" As though some millionaire had just presented me with a check for $875,000. Of course, folks in the food business know that restaurant start-ups are anything but whimsical.

But it did get me thinking. The locavore and "slow food" movements are in their infancy in terms of practice, whatever their philosophies. Frankly, it is quite a challenge to cook locavore, generally defined as food that travels not more than 100 miles from the source.

Of course, for 99.9 percent of human history, locavore was the default condition. Even at the height of the Roman Empire, with shipping routes and well-maintained roads, food was essentially local. Olive oil, dried delicacies, preserved fruits, wine and, above all, salt and spices, were about all that was imported. The basic diet was what was grown or raised in your community. Following the disintegration of the empire, feudal keeps were almost completely self-sufficient -- the lord's table might have game or other meat, but for most, food was beer, bread, porridge and the pot-au-feu, hopefully enriched by any animal that could be shot, snared, fished or scavenged.

The growth of towns and trade in the Renaissance led to a more diverse menu of imported delicacies, but only the wealthy could indulge. This was the case up into the late 19th century, when methods of food preservation made possible regional, even national distribution.

Now fast forward a century, an era when many people choose not to cook -- there are ready-to-eat alternatives all around us. "After all," writes Jean Johnson, "wasn't that part of what the Women's Movement was about? Freeing ourselves from the endless, thankless chore of cooking?"

The locavore and "slow food" movements are part of a grassroots backlash, taking an active role in eating seasonally and locally, and supporting community farms that produce our food.

Humboldt County vegetarians have an advantage, though not as much as one might think. One of my students bragged, "I eat locavore every meal!" I asked him what his usual evening meal was, and he said, "Sautéed veggies over rice." Well, where does the rice come from, and what kind of oil do you sauté with?

Grains are a problem. Bread requires meal -- wheat, rye, corn, etc., none grown commercially anywhere close to us. (That may change: Shakefork Community Farm sold hulled barley and oats at the Farmers' Market this year, and Windborne Community Farm, in Scott Valley, has a mill that produces several flours, most of it for subscribers in the Bay Area.)

If there are vegetable oils processed locally, I don't know them. You want butter on your mashed potatoes? Better have a cow-owning friend who churns her own butter. The local dairy collective ships cream to Los Angeles, where it is processed with others throughout the state, packaged into boxes and shipped back for sale. Only the marketing is local. (However, both Loleta Cheese and Cypress Grove use local milk.)

Many are the pitfalls that await the naive locavore cook. But it behooves me to practice what I've preached. And so it came to pass that we had a four-course attempted-locavore meal.

-- Mini-Kumamotos oysters on the half-shell, locally processed olives, with chilled shots of moonshine.

Aged white cheddar cheese, with raspberries, apples and pears, and our own lemon cordial.

I would be remiss not to critique my own meal, so here it is:

First course: Local oysters are a blessing. Beni shucks and serves them with lemon juice and zest and our own chile sauce. The locally cured olives were frankly horrid: tough, bitter and under-marinated. I had saved a mason jar of Hoopa moonshine willed me by Marco Katz when he left town. We served it iced in chilled tiny glasses. Freezing mitigated the raw ethanol (at least 100 proof), but not enough -- it was harsh.

Second course: There's no way to lose with fresh corn, and I blended Strauss Family butter (which has a very high fat content) with local chiles I had smoked. Heavenly. The Mad River Scotch Porter was robust without too much sweetness, and had a finish of smoked peat.

Third course: Despite the relative simplicity of the menu, it was neither easy nor cheap. Wild Chick Farm is a case in point, if you want to eat 1) local, 2) organic and 3) humane. The cost of their whole chickens was about $6.65/lb.

For that price (which includes the bones, neck, stuff you'd normally discard), you could have filet mignon! Are you sure you want to go locavore?

On the plus side, it was among the best chicken we've ever tasted, basted with blended garlic and lemon juice, along with quartered baby lemons (a recipe I adapted from Diana Kennedy's Nothing Fancy). The pan juices were whisked with a little Mad River Farms blackberry-chipotle barbecue sauce. And we wasted nothing of that chicken, freezing the bones and meat to make stock.

Even local potatoes need salt and butter or oil. We whipped them with Olinda Ridge MB olive oil from Mt. Shasta. Salt is another matter. Even in the Dark Ages people imported salt. (But I've spoken with an entrepreneur who thinks salt could be a locally produced product.)

The tiny haricots verts or flageolet beans were available briefly this summer. We hand picked the very smallest from bins of yellow and green ones, and blanched them before dressing with olive oil, more chunks of lemon (locally grown) and cranberry vinegar from Langlois, Ore. The same oil made a third appearance in duck-egg mayonnaise for wedges of green and orange heirloom tomatoes. The Double IPA is a new addition to Mad River's collection, dry, bubbly and bitter, possibly better than my previous favorite IPA, Lagunitas Creek.

Fourth course: To conclude this supper, we ate the last cheddar made by Bandon Cheese Factory, before they were bought by Tillamook, which ended their production of artisanal cheeses. Happily, we have a raspberry patch, a Gravenstein apple tree, and our young Asian pear trees fruited this year. The lemon cordial is a homemade Meyer lemon version of the Italian liqueur Limoncello, made by macerating lemons with cheap vodka and sugar, neither local.

Bandon and Langlois are just up the coast, about 100 miles. Mount Shasta is well over the limit in highway miles, but about 100 as the crow flies.

Of course, it all depends on your definition of "locavore." I'd say we scored 90 percent on the meal. Percentages, however, are less important than commitment. The "tipping point" will come when enough of us want local food to make it both profitable for the supplier and lower in cost to the consumer. Meanwhile, we do what we can.