Plunging into the bay and beyond 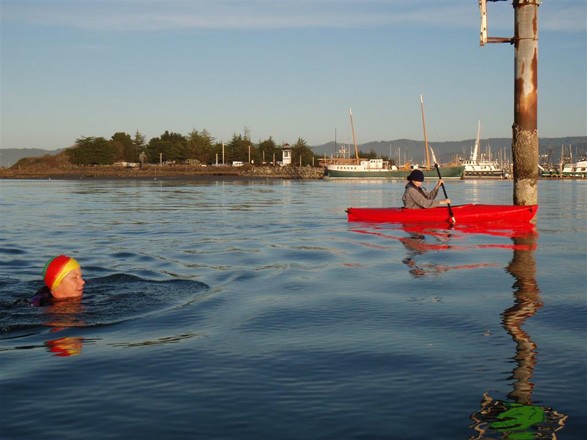 Why would anyone choose to swim in an indoor pool with nothing to look at but painted stripes and concrete ceilings? Especially when right outside are the big, wide, inviting waters of Humboldt Bay and Stone Lagoon.

Mention "bay swimming" at a party, though, and you'll hear, "Yuk," "It's way too cold," "Are you kidding? It's toxic!," or "You'll get hit by a boat." This is a marketing problem! San Francisco Bay, with busier sea traffic and more turbulent currents, boasts a large and enthusiastic community of open-water swimmers. Yet almost no one swims in Humboldt Bay, and only a small cadre swims regularly in Stone Lagoon.

What could be more "locavore" than using the water that exists right here for exercise and pleasure? It's not as straightforward as pool swimming, but with some strategizing beforehand, anyone can take advantage of our clean, legal, local, no-cost resource.

Of course, any natural body of water has potential risks. "In any ocean or bay, viral contamination is possible from bacteria associated with water runoff and sewage discharge," says Susan Buckley, Humboldt County's Public Health Branch director. Her advice to swimmers is to use common sense. "Don't swim if you have cuts or open sores. Don't swim after a heavy storm, or near runoff. Avoid swallowing water, and after swimming, dry your ears and shower." For extra caution, she suggests keeping your head above water.

Bay sanitation also depends on the season. "It's not safe after the first flush," says Dr. Frank Shaughnessy, professor of botany at Humboldt State University. Fertilizer-laden runoff, which can lead to nausea and diarrhea, comes on the heels of the first major rains, typically in October, he said.

Although the bay looks murky, it's clean enough that about 70 percent of the state's oysters are grown here. "'Turbid' does not mean polluted," says Susan Schlosser, marine advisor at the California Sea Grant, a federally funded agency that sponsors marine research and education along the state coast. "The only reason the bay isn't crystal-clear is that the bottom is mostly soft sediment that gets stirred up by currents."

Where to swim: Humboldt is the largest bay between San Francisco and Coos Bay, Ore., offering plenty of options for getting into the water. Before diving in, it's best to plan backwards and think about the easiest places to get out. Hoisting up from the water onto Eureka's C and F Street docks requires considerable upper-body strength. Easier options include the Samoa Bridge and Eureka Marina boat ramps, where a swimmer can walk right up the ramp, or the spongy floating docks north of the Adorni Center, which are only a few inches above the water. Swimmers can also use one of the four ladders spaced periodically along the wall of the Fisherman's Terminal, currently under construction at the south end of the Eureka boardwalk.

Once in the water, swimmers have the option of hugging the shore or swimming out. Since Humboldt Bay is replete with fishing boats, crab boats, oyster boats, yachts, the Madaket, kayaks, rowboats and sailboats, the safest option for avoiding water traffic is to stay close to shore. Those who choose to swim out into the bay can't assume boaters will see them, and ideally should be accompanied by a kayaker or rower.

For open-water orientation, landmarks that can double as swimming objectives abound: the channel marker halfway to Indian Island, the orange buoy just beyond, the fisherman‘s memorial, and the docks of moored sailboats at Woodley Island.

When to swim comes down to a complex algorithm of factors involving temperature, tides, currents and wind. Perfect swimming conditions are at low tide (when water can be as much as eight degrees Fahrenheit warmer than high tide), and early morning, before Humboldt winds get up, when the water will be calm. The slowest currents occur during a slack tide, about half an hour each side of low and high tide. During strong currents, swimmers will be fighting their way in one direction, then floating back.

At low tide in summer, the water will feel quite reasonable (at least after the initial shock) to swimmers wearing a thin "shorty" -- a thigh-length Neoprene wetsuit -- along with gloves, booties and a cap, with an optional long-sleeve polypropylene shirt for more warmth. The air will feel cold after swimming, so a towel and a dry change of clothes are helpful.

Until a rotator cuff injury derailed him, Ken Kyle, a self-employed recycler, swam for 10 years in the bay near Fields Landing, and in the North Coast's rivers. Twice a week, between October and April, he would walk to the end of the Fields Landing dock, check the water with a handmade T-shaped metal probe, dive in and swim 90 strokes to the buoy and back, wearing only a pair of cut-offs. "It was beneficial in every way," he says, "for health, for toughening up, for the courage and cold conditioning."

Others swim in Stone Lagoon, carpooling from the Wildberries parking lot several times a week during the summer. A few intrepid souls swim there year-round, including Paul Hagen, an environmental lawyer who lives and works in Arcata. "Stone Lagoon has character," he says. "It‘s like a big bathtub, a bowl. When it's sunny, the ridgeline keeps changing, and you can see how far you've moved. I do it because there's so much beauty out there. In the first-light swim, water takes on a rosy hue. Even cold water running down your spine is beautiful."

Whether in the bay or the lagoon, open-water swimmers never inhale chlorine, never stare down at pool stripes, and never jostle other bodies (except perhaps the occasional fish). They're surrounded, instead, by fresh air, boundless skies, sunrises, seals, herons, and all the room they want.

Louisa Rogers, a management consultant, has been swimming in the bay for four years. She can be reached at louisarogers7@yahoo.com. She's the first writer to help revive the Journal's column about everything outdoors. If you'd like to write for "Get Out!" please pitch your column idea to Carrie Peyton Dahlberg, at carrie@northcoastjournal.com.