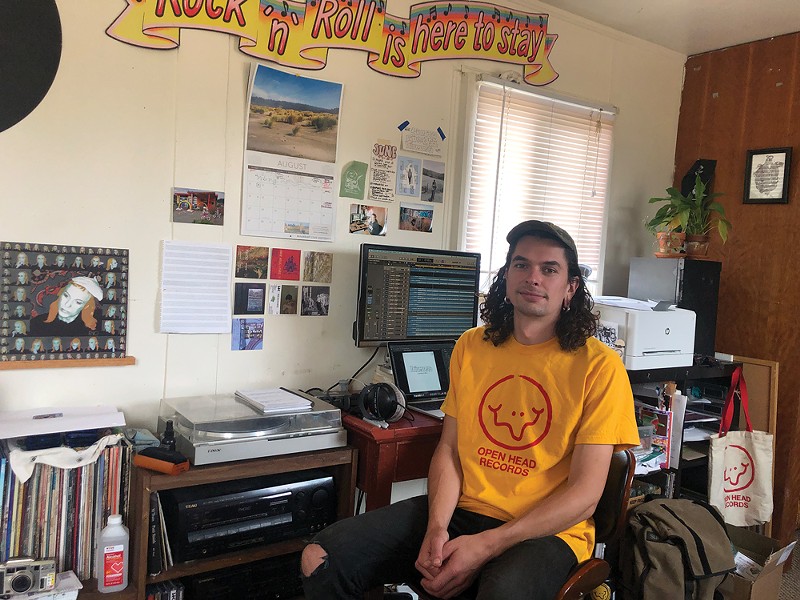 Courtesy of the artist Luke Aronie, founder of Open Head Records in the studio.

Last week I asked a very important question about the continued existence of live music in the face of our increasing pandemic spike and its attendant dangers. That question has been answered by a wave of cancelations here and abroad. I wrote about the spike affecting my former home of New Orleans and, to give you an idea of how seriously that place is taking things, the rescheduled Jazz Fest 2021 has now been canceled. This is probably the most internationally famous festival in a town whose lifeblood is music tourism. The Rolling Stones were set to headline. Things are indeed dire.

Back home in Humboldt, our own little musical ecosystem is crashing. Live gigs are evaporating left and right. The good people at the Humboldt Folklife Society made the tough but wise decision to axe the Buddy Brown Blues Festival scheduled for last Saturday. Meanwhile, the county fair is still on (yikes) and who knows what sort of outcome will prevail in regard to next month's North Country Fair. My memory is long enough to recall Rex Bohn as a fairly constant and loud voice for easing local COVID restrictions, and now he's contracted a breakthrough case of the virus. I wish him good health, and I hope that he gets better quickly and possibly rethinks some of his previous positions, although self-reflection hasn't traditionally been one of his public qualities.

Against this backdrop, dear reader, I have been looking into some unconventional avenues to pursue leads for your listening pleasure. I am happy to report that I have got the goods, for this week at least, in the form of a positive development from that crazy year of our Lord 2020: A new local record label.

For the last eight years, Luke Aronie has worn many hats in the local music scene, from jazzy percussionist to drone and metal-influenced guitarist. You may remember some of his past acts — Frog or Spliff Moth —from these very pages. In December of 2020, he released a solo drone ambient album called Magic Castle under the moniker Luker, and in doing so he also inaugurated his own DIY label, Open Head Records. "I felt a desire to document the local talent and assemble all the freaks under one roof. So far it has been a labor of love, learning the intricacies of malfunctioning old tape machines and spending a lot more time in Photoshop than making music."

Cassette tapes are a popular choice with some musicians who suffered through the overly compressed and digitized "loudness wars" of the '00s when they were kids, and Open Head's catalogue is only physically available on cassette tapes. This seemingly archaic choice is actually becoming quite popular, as the sound has its own warmly crisp aesthetic and the listener is forced to appreciate the sacred value of Side A and Side B, a sonic experience which forces a certain sequenced time curation that is a near lost art in our digital age. This is readily apparent when listening to the various artists — most of them local musicians who are Aronie's close friends — and their approach to their respective tapes.

Considering its relatively fresh mint, Open Head has a pretty tight little line up of seven releases, most of which would fall into a general catch-all genre of psychedelic listening. From the chaotic fills and valleys of IDYL's Sentimentalism, to the plangent and haunted songs of Reaching by LK, each artist on Open Head has a very clear and well-executed musical vision. There's even an international act on the label, as Mary Anne's Polar Rig from Sweden brings its fuzzy, '90s pop-influenced songs to the table.

Aronie says while the catalogue so far is available on cassette and via the label's YouTube channel, "We are looking forward to making CD's and vinyl down the line. I am excited to work with more amazing underground artists and bring more weirdo/outsider music to the people." That could include live music, too, eventually, he says. "When it is safe to assemble crowds again, I hope to throw Open Head-sponsored shows and a local rock and experimental music festival."

While most of the records are fairly ambient, we can expect other styles in the mix down the line. "Some upcoming releases include a psychedelic 'classical' album and a few heavy metal and punk records, he says. And seeing that some of the first run printing of a couple of his releases as well as some of his merchandise — hoodies, stickers — have been sold out on the website (www.openheadrecords.bigcartel.com), I am assured that another limited edition print of some new goodies is also on the way.

So much of our recent past has been a series of setbacks and colossal structural failures for our society at large and music scene specifically, that a reasonable person would be forgiven for just muttering the word "Bummer" every few seconds reflexively as a sanity-grounding mantra. After all, we need our coping mechanisms. The contemporary philosopher Liam Kofi Bright recently wrote an excellent paper on his blog about rational coping and facing the future titled "Pessimism of the Intellect, Optimism of the Will," meditating on Antonio Gramsci's famous prison-penned aphorism. In it, the author details the massive danger of giving into rational despair in the face of mounting, worldwide setbacks. I find tremendous hope in a project like Open Head Records. I really do. It's an unambiguously good thing to try to keep a musical community alive right now and, from what I can tell, Aronie is doing that as best as he can, with the right spirit. Open head, open heart.

Collin Yeo (he/him) lives in Arcata. He misses clear skies in the morning.