HLOC's Phantom of the Country Opera 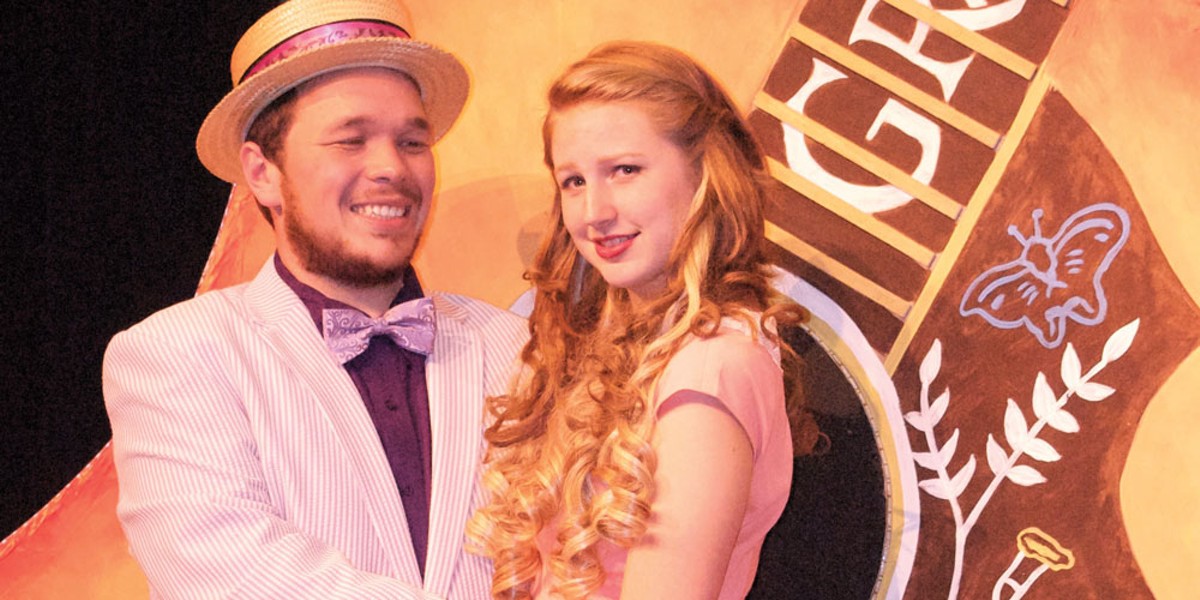 Phantom of the Opera traces its lineage back to to a 1910 novel of the same name by French author Gaston Leroux. For many people, the point of creation for the story is either the classic 1925 silent film starring Lon Cheney or the 1943 talkie with Claude Rains. But let's face it, the best-known incarnation of the century-old tale of opera singer Christine and masked, disfigured Erik haunting the bowels of a Paris opera house is Andrew Lloyd Webber's 1980s West End/Broadway musical, which, once he unleashed it upon an unwitting world, never seems to have gone away (sort of Webber's stock in trade). Adaptations, re-imaginings and parodies of Leroux's tale have spawned and grown like creeping kudzu through the years, but just as an oft-recorded and covered piece of music takes on an enduring life of its own, it's hard for people to resist putting their own imprimatur on Phantom.

Enter Phantom of the Country Opera, the Humboldt Light Opera Company's annual summer production at Humboldt State University's Van Duzer Theatre, directed by HLOC artistic producing director and theater stalwart Carol McWhorter. A 1995 musical with a book by Sean Grennan and Kathy Santen, and music by Michael Duff, it relocates the story from Paris to Nashville, with a brief stop in Milan first. It is there, on the stage at La Scala, that we meet Chrissy (Rachel Post), in an elaborately staged, impressive opening number. An adept soprano, Christine has captured the heart of devoted suitor and co-star Antonio (Craig Waldvogel) but chooses to return to America when she hears of the death of her mother, a noted country and western performer.

Back in the Music City, Christine is Chrissy Jo Jenkins, and she finds herself as a backup singer at the Opry-esqe Country Palace to the Queen of Country Music, Miss Sally Barker. She meets Skipper (Ty Vizenor), Sally's earnest young son, and finds that Sally is a scheming prima donna, who, along with her husband, Major Barker (Bill Ryder), is not above stealing credit for an old song written by Chrissy's mother. Chrissy also has the pining heart of Antonio with which to reckon, along with her rise to stardom and her developing friendships both with Skipper and Aaron (Carl McGahan), the venue's low-key but all-knowing maintenance man. And, of course, something is afoot around the Palace, which becomes clear with Miss Sally's skullduggery in motion: Lights crash down from the ceiling, voices come from nowhere and off we go. Phantom is great fun overall, as the puns fly along with sly jokes back to the original story, some hilarious down-home lines ("When I met you, you were sellin' wigs by the pound") and comic numbers ("Hog Butcher's Daughter," "Does Your Daddy Know You Kiss Cowboys?"), as well the fabulously silly "Spaghetti Western" in the second act.

But the straws that stir the drink, as it were, are Post in the lead and McGahan as Aaron. Post is dynamic in her role, and if her acting chops are a bit unpolished, that fact is dwarfed by her amazing voice throughout the production, especially in the showstopper "If I Could Hold You." McGahan possesses a great voice as well, both speaking and singing, that sounds like Johnny Cash's basement-deep baritone. Phantom is not without its hiccups, such as the character of Skipper seeming to vanish from the story and stage for a roughly 40-minute stretch of the first act. A few clunky characters and subplots are cringe-worthy, too, even if the actors are able to punch out enough comic zeal and physicality to bring them to life in Van Duzer's vast and acoustically rich space. And a major plot point is telegraphed so early on that it would be worth griping about, were the show not based on a 116-year-old work with plot points so well-known they've become pop culture tropes. So gripe about that I shall not.

HLOC's summer productions, which in recent years have included Mary Poppins and Thoroughly Modern Millie, have set the standard high for production values, and Phantom does not fall short at all in that regard. The live orchestra conducted by Holly MacDonell does an excellent job, and the country costume styling of the enormous cast by Katri Pitts and Laura Welch is impressive indeed. Phantom is winningly engaging all in all, enough so that I never thought to wonder until later if, in fact, the Van Duzer has some sort of phantom of its own dwelling away in its far reaches. I spent a lot of time in the Theatre Arts Building when I attended HSU, and it frankly wouldn't surprise me. So I guess that's the next take on Leroux's original story. Someone out there get on that.

Phantom of the Country Opera plays Fridays and Saturdays through Aug. 13 at 7:30 p.m., with Sunday matinees at 2 p.m. on Aug. 7 and 14 at HSU's Van Duzer Theatre. Visit www.hloc.org.

Backstage farce Moon Over Buffalo picks up steam as it goes, with solid door-slamming comedy from North Coast Repertory players. Catch it Fridays and Saturdays at 8 p.m., and also Thursday, Aug. 11, through Aug. 13, with a Sunday matinee Aug. 7 at 2 p.m. For more information, call 442-6278 or visit www.ncrt.net.

Tales of a Sexual Tomboy stops for a two-night stand at the Arcata Playhouse Aug. 5 and 6 at 8 p.m. Joyful Raven's one-woman comedy follows a young woman's romantic escapades as she stumbles into her own. Call 822-1575 or visit www.arcataplayhouse.org.

Plays in the Park shakes up Redwood Park with A Roaring Girl, the tale of feral female Moll Cutpurse, who rattles 17th century London with her sword fighting and hard partying. Runs Aug. 19 through Sept. 10. Call 822-5951 or visit www.cityofarcata.org.

Zuzka Sabata takes her one-woman play about America's first tattooed white woman, The Secret Life of Spantsa, all over the county, starting at the Arcata Playhouse on Aug. 18. See the Calendar for performances with discussions to follow, or visit www.zuzkasabata.wix.com.