The Odd Couple mixes it up at North Coast Rep 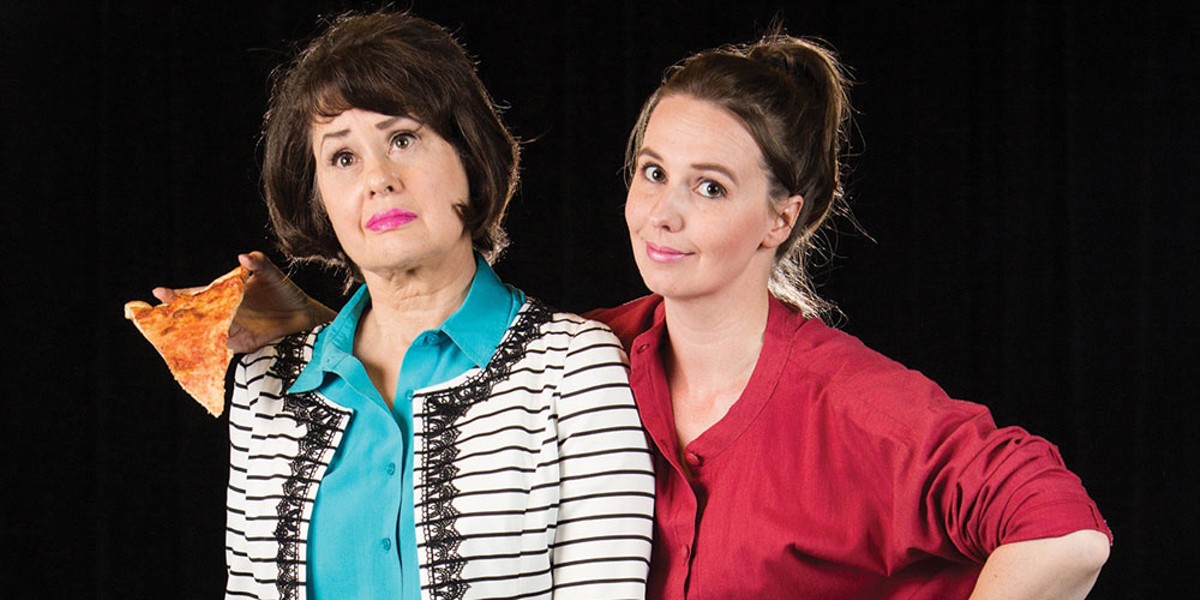 Ahh, opposites. Not all of them exist in complete diametric opposition to one another, as many adhere closer to "one of these is not like the other" observation. Yin and yang, apples and oranges, Nirvana and Nickelback — human history has seen a very long litany of them at work.

And well before the era of mismatched cops became a well-worn cinematic trope, an archetypal duo become a sort of template for the comic foibles of the mismatched, Neil Simon's The Odd Couple, which took its Broadway bow back in 1965. And it is a template in an even realer sense, as in the mid-1980s Simon himself reworked the original into a version with the whole cast reversed by gender, transforming leads Oscar Madison and Felix Unger into Olive Madison and Florence Ungar, and it is this version that kicks off NCRT's 2016-2017 season.

And the original's first act, a pretty dense and masterfully long comic piece, switches deftly in Simon's reboot from a Friday night poker game with the guys to a Friday night Trivial Pursuit rumble with the ladies. Olive (Amanda Slinkard) is a successful TV producer with a great gaggle of friends, but also a messy apartment that plays host for the Friday shindigs and, additionally, a no-goodnik ex-husband who is fond of guilt-tripping Olive over the phone into sending him money. Her friends are much more bothered by the latter life aspect than the former, although they're less than crazy about the turning-odd-colors sandwiches to be found in Olive's refrigerator.

Missing from the evening's festivities is Florence (Gloria Montgomery), who eventually shows up after some phone calls have established that she's left her husband due to some ongoing and irreconcilable differences. After the Friday night game dissipates and heads off, Olive insists that the quite despairing Florence move in with her at once, given that she has the space. And here the element of opposites sets in: Florence is fastidious and hyper-organized down to the smallest of details, be they in life at large or household matters ("I think even she kept all her clothes on when her children were born," one game night friend observes). She also has a propensity to overdramatize back pains or minor health problems to a great degree of escalation and cleans the apartment at a furious and almost never-ending pace, something Olive, happy to come home from work and toss her shoes on the recliner, is less than content with.

The original The Odd Couple is really a bit of a chestnut, and it was a big commercial success for Simon that served as a stepping stone for the deservedly award-winning career that followed. A staging of the all-female version sidesteps that problem pretty well, while at the same time showing the endurance of some of the original material. In The Odd Couple's first time out, the only women who weren't voices over the phone were a pair of neighbors, two English sisters from upstairs in the building, who existed basically as potential love interests for a second-act sequence.

In this version, they instead are Spanish-American brothers Manolo and Jesus (respectively, the superb Daniel Kennedy and Matthew Cole) and they serve as great comic relief amid a cast of quite well-drawn female characters. The awkward, but comically rich, double kinda-date between those two and Olive and Florence also serves as a good jolt for a play that moves in fits and starts and occasionally lags in the back half. Having a few dated references from the play's 1960s/1980s genesis doesn't help much — not a lot of people are going to recall the line from an E.F. Hutton brokerage TV campaign that someone utters as a punchline — but while things like that serve as hindrances, the very good work of Slinkard and Montgomery in the dynamic of an arrangement that is really doomed to fail goes a long way.

Among the supporting cast, Toodie Boll, last seen in NCRT's Moon Over Buffalo, keeps on a great streak of getting the best out of comic roles in an inventive way that really goes to truly fine and funny places, and Dell'Arte stalwart Tisha Sloan does a bang-up, great and funny job as the most blunt and outspoken of the game night gang at Olivia's apartment. The Trivial Pursuit game with six friends makes a great running chatty, funny bit of business at the start, middle and end of The Odd Couple. And it's hard to really embrace any empirical explanation for why opposites attract — because in real life, as in Simon's play, they really basically don't — but it's a nice idea to think they can coexist. Just not too closely.

The Odd Couple plays at the North Coast Repertory Theatre in Eureka on Friday and Saturdays at 8 p.m. through Oct. 8, with Sunday matinees at 2 p.m. on Sept. 25 and Oct. 2 and a Thursday show on Oct. 6 at 8 p.m. For more information, call 442-NCRT or visit www.ncrt.net.

After Darwin continues to evolve at Redwood Curtain Theatre, its strong cast moving smoothly between doubled parts in a play-within-a-play that leaves several issues frustratingly underexplored. Performances are Thursday, Friday and Saturday nights at 8 p.m. through Oct. 1, with a Sunday matinee at 2 p.m. on Sept. 25.

Do the Time Warp again when Ferndale Repertory Theatre resurrects the comedic rock musical The Rocky Horror Show starting Sept. 30. Bring your own fishnets for audience participation Fridays, Saturdays and Sundays through Oct. 30. Ages 16 and up. Call 786-5483 or visit www.ferndalerep.org.