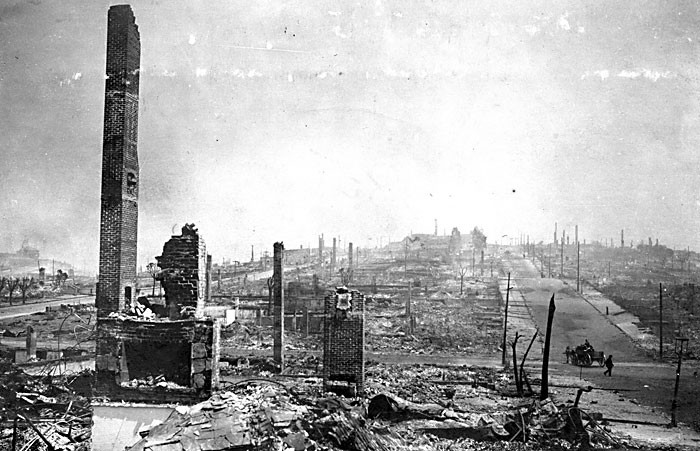 At a conference on Mars some years ago, I was amused by a comment by long-time NASA researcher Chris McKay. Another space scientist was enthusiastically explaining how his proposal to send humans to Mars would cut the cost of a Mars mission by 90 percent, from NASA's then-estimated $400 billion to a mere $40 billion.

"Just one more order of magnitude and we've got it!" McKay interjected.

Ah, those beguiling orders of magnitude. We use them all the time, often without recognizing just how vast they are: "A billion here, a billion there, and pretty soon you're talking about real money!" is supposed to have been said by a politician decades ago. Now it's a trillion here and there -- but the difference between a billion and trillion is a mere three orders of magnitude, hardly worth worrying about, right?

Wrong, of course. Take earthquakes. Last month, Humboldt was hit by a 6.5 magnitude quake, just one-and-a-half orders of magnitude less than San Francisco's devastating 8.0 quake of 1906 (the 1989 SF earthquake was 6.9). How do such apparently small numbers lead to such huge differences in effects? Because of base-ten logarithms. A difference of one in magnitude -- say between 4.0 and 5.0 -- is equivalent to a 10-times difference in amplitude, as measured by a seismometer and adjusted for distance to the epicenter. This in turn is equivalent to a 32-times difference in energy released. "Our" Jan. 9 quake was equivalent to the energy released by six megatons of TNT, while the 1906 TNT equivalent was about 1,000 megatons. The largest recorded earthquake, Chile's 1960 event -- magnitude 9.5 -- equates to nearly 200,000 megatons.

When Frank Richter, then at the California Institute for Technology, devised his eponymous scale in 1935, he wanted to come up with a simple measure of the intensity of an earthquake, and his logarithmic orders-of-magnitude scale has stuck as a "quick and dirty" benchmark. In the real world, using one number to define an earthquake has its limitations, of course. We're much more interested in the amount of damage than how much the needle of a seismometer is shaken, so a small quake in a densely populated area is more significant than a huge one far from civilization.

Here in Old Town Eureka -- the very center of civilization, for all intents and purposes -- we carry on bravely and stoically, while the Cascadia megathrust, a few miles offshore, flexes for the next Really Big One.

Barry Evans (barryevans9@yahoo.com) enjoys earthquakes right up to magnitude 7 -- beyond that, he'll pass, thank you.